How to put hacks on Minecraft

Use the command console

Before talking about Minecraft mods, I want to talk to you about a tool that allows you to get some more advantages during your gaming experience and that does not require any modification of the game files: the command console. In the next few paragraphs, I'll explain how to enable it and what codes you can use to make Minecraft a little "easier".

La command console is an interface that allows the insertion of specific strings to modify, in general, the natural behavior of Minecraft. I'm talking about this tool because you can use it at any time in a single player game; Also, if you play online on a server, you won't have to worry if you inadvertently use the command console, as this is disabled for all players except administrators and moderators.

Now, however, let's see how to enable the console and which commands could be useful to facilitate your gaming experience. For enable the command console in Minecraft, you must first identify which platform you are playing from.

If you play Minecraft on computer, you can enable the command console both if you have already created a new world and in its creation phase. In the latter case, in the main Minecraft menu, click the button Single player and then presses on the one called Create a new world. 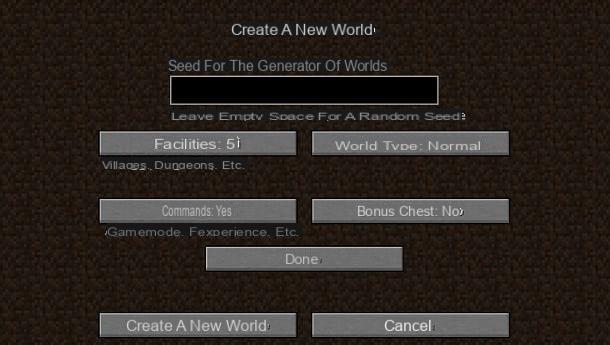 Once this is done, enter the name of the world and then press the button Other world options, to access some additional setting parameters. So locate the voice commands and click on it to change the wording to Yes. Then press the button Done and then on Create a new world.


If, on the other hand, you have already created a world without having enabled the command console, you can temporarily access it by going to the settings menu (reachable by pressing the key Esc during the game) by pressing the button Open in LAN and pressing on the voice commands, to show the wording Yes. Then click on the button Start the world on LAN, to return to the game with the command console enabled. 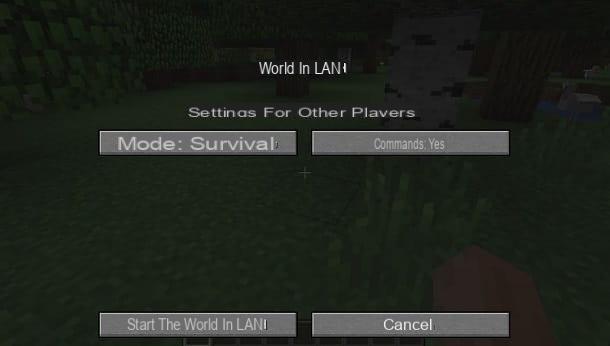 Whatever method you used to enable the console, to use it just press the key T on the keyboard (in order to open the chat) and enter the command strings that I will tell you about in the next paragraph.

If, on the other hand, you play Minecraft Pocket Edition su smartphone o tablet, after starting the game via its icon on the home screen, tap on Play and then choose the items Create new > Random generation. Now, scroll down the screen until you identify the entry Activate the cheats and move the lever up ON. Then press the button Continue and, finally, on the one called Crea, to start a new game.

During a game, you can enable this tool by pressing the icon with the symbol of a speech bubble, which you find located at the top.

Once you've enabled the command console, it's time to use some code strings that can help you during your Minecraft gaming experience.

The first code you could use is the one related to teleportation, which allows you to reach any place on the map by typing in the chat / teleport [subject] [destination]. You will need to indicate your character's name or term as the subject @p; while as destination you will have to indicate the coordinates X, Y e Z of the place you want to reach.

In this regard, I suggest you read my article on how to teleport Minecraft, in which I will explain in detail how to use this command. 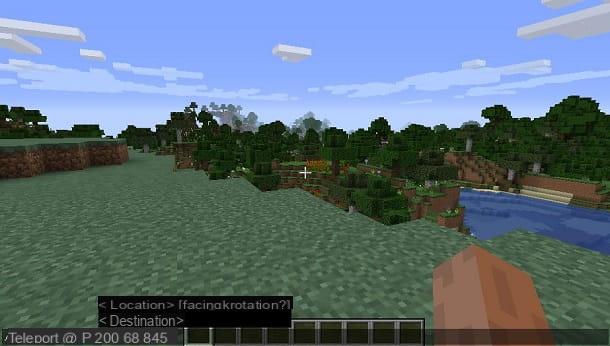 Another useful command to get all the resources available during survival mode is / gamemode creative [subject]. Through this string, you can change the survival world mode to creative, accessing all resources and also allowing you to fly.

When you intend to change the current session back to survival mode, simply use the command /gamemode survival [soggetto].

Other useful commands are those defined by codes / give, /effect e / summon. These allow, respectively, to obtain items in the inventory, status effects or summons of creatures and objects.

To use the command give, type / give [subject] [object] [quantity], where for subject you must indicate the name of your character and in object indicate the name of the resource or instrument you want to obtain. When you type the code, you will be given a suggestion on the objects to insert; then type the term Minecraft: and type the first letter of which the name of the object is composed, to show the entire wording (for example minecraft:diamond_axe). Obviously the names are indicated in English and not in cittàn. Subsequently indicates the amount, by entering a positive integer. 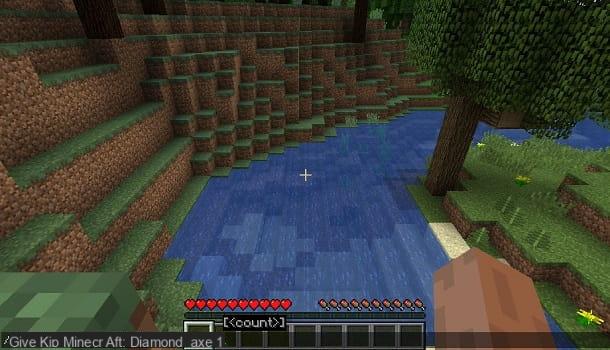 The command effect request the string / effect [status] [subject] [effect name] [tempo] [amplifier]. For state you have to choose between give e clear that attribute or remove, respectively, an effect to a subject. If you use clear, you will not be prompted to use the tempo and amp parameters, which are necessary if you use give.

In subject indicate the name of your character and in effect name indicates the name of the status effect you want to apply (or remove) to your character. Type Minecraft: followed by the first letter of the effect (in English) to see the suggestion on the wording to be written (for example minecraft:invisibility for invisibility). Then enter the number of seconds for the duration of the effect and any amplifier, which will multiply the intensity of the effect. 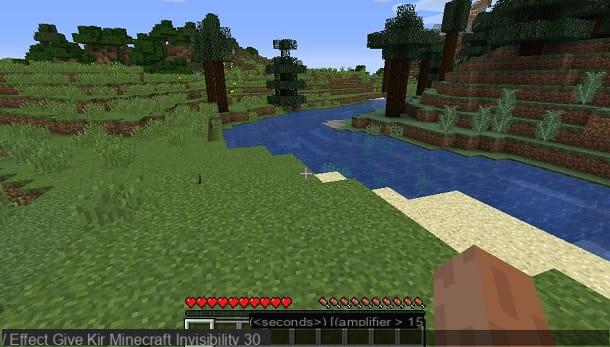 The command Summon it works in a similar way to those shown in the previous lines. Requires the code / summon [object name] [location]. Typing Minecraft: you will be shown a list of suggestions and, by typing the first letter of which the name of the object or creature to be summoned is composed, you will be able to read the entire necessary string (for example minecraft:enderman to summon an Enderman). It then indicates the possible coordinates of the map; if you indicate nothing, the summoning will occur next to the avatar. 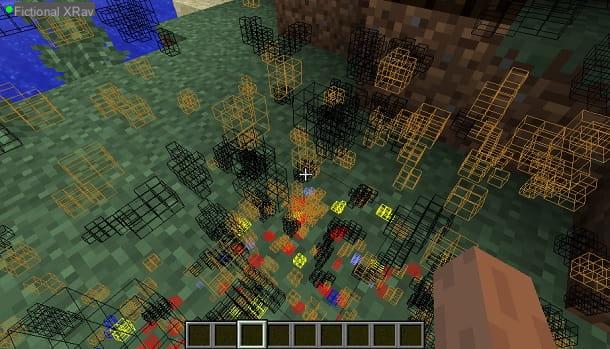 In addition to the command console, you can also use the against, which add some features to Minecraft, often improving the user's gaming experience. In general, mods cannot be considered hacks, but simply modifications that enrich the user's gaming experience. I'm talking, for example, about those that improve the graphic quality, those that add completely new objects or those that modify the behavior of the dynamics of Minecraft.

The use of mods is not always lawful when playing online, because they improve the game experience in a way that is not allowed by the server rules, or they are simply not supported. So pay attention to the mods you use to avoid running into a possible ban.

However, there are some mods that can be considered real hacks, such as X ray o Simple Hax. These mods allow you to see through the blocks, perhaps to identify the resources to be collected or find underground mines and fortresses.

In general, the installation of a mod requires Minecraft forge: a program for Windows that allows you to manage almost all the mods created by other users. Through its interface, reachable via the button Courage On the main Minecraft screen, you can enable or disable individual mods.

To install Minecraft forge, go to the official website and choose the version of Minecraft you play, via the left sidebar. Once this is done, click on the button Windows Installer to download the file forge-xxxx-installer-win.exe. After downloading it, double-click on it and, in the window that is shown to you, then click on OK to install.

Once this has been done, it's time to install the individual mods. Then reach one of the many websites that contain Minecraft mods, such as CurseForge. Via the menu item Projects or the search bar at the top, find the mod that's right for you and download it using the button Download.

Reach, now, the path C: Users [name] AppDataRoaming.minecraft means File Explorer Windows and create the folder mods (if you don't already find it among those on the screen). Then place the file JAR of the mod you previously downloaded and launch Minecraft. 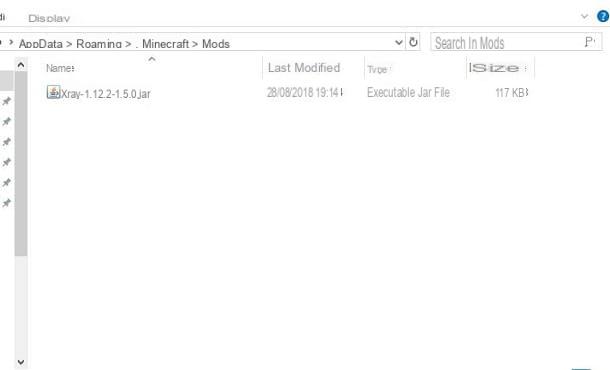 In the Minecraft launcher, now press the icon with the symbol (▲) that you find next to the button Play. Then select the profile Forge and click Play. On the main game screen, press the button Courage, to access the list of installed mods, in which you will find the one you just imported.

Now you just need to log in to a game and see the effects of the mod you just installed, following the same instructions that were indicated in the description of the file you downloaded, on the dedicated CurseForge page.

In addition to the solutions that I have proposed to you in the previous paragraphs, there is the possibility of downloading real ones hack that allow, through a modified interface, to access many features, such as invisibility, flight or immortality.

These tools, in addition to being banned in online matches, may not be safe. In fact, they are not present in the Minecraft repository databases and may contain del malicious code which would infect the computer.

Having said that, I advise you to use the solutions I indicated in the previous paragraphs, which can certainly improve your gaming experience during single matches, with greater safety.

How to put hacks on Minecraft

add a comment from How to put hacks on Minecraft