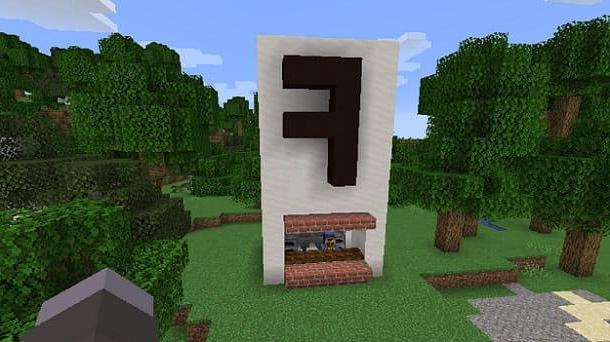 Prima di enter the dettaglio della procedura su how to make a shop on minecraft, I think it might interest you to know more about this possibility.

Well, generally those who intend to create a shop within the Mojang title want to do it by realizing a real shop, which works through the mechanics of the barter. Put simply, a structure is created that acts with a mechanics similar to that of A theme e Itinerant merchants.

Essentially, the player can trade using the Emeralds and getting the most disparate in return objects, such as food. If you want to learn more about how the trade mechanic works in Minecraft, you can find a practical example in my guide on how to find the mansion without a seed.

In any case, basically, within the Mojang title there is no possibility of creating a functioning shop, as the game simply involves trading with Villagers and itinerant merchants. However, it actually is It is possible to find a solution even without mod, via Creative mode or commands. 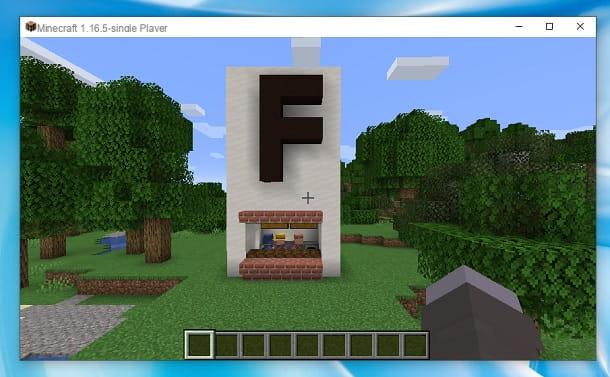 Alternatively, if you have the Java version for PC of Minecraft, while driving there will also be a way to treat a community-made content, which goes to make the mechanics of trade within the title much more in-depth.

For the rest, there are users who, aware of the fact that without commands and mods it is not possible to create a working shop on Minecraft, they just want to make one aesthetic structure that it contextualizes well within its own village.


In this tutorial I will examine all the possibilities just described, explaining what you can do about them. Good continuation! 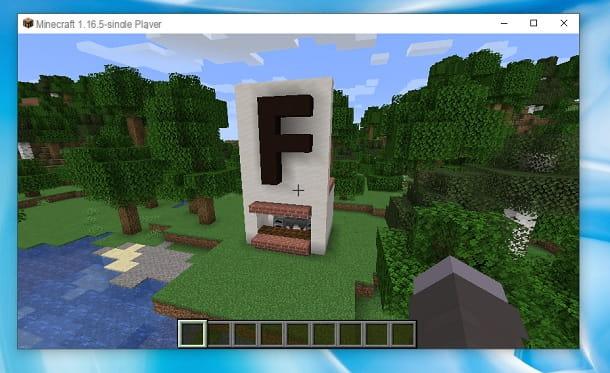 After showing you what are the mechanics made available by the game, I would say that it is time to take action and understand how to make a shop on Minecraft.

The indications in this part of the guide refer to theJava edition for PC of the game, but in reality, net of some changes in terms of the names of the elements and the final commands, the procedure is also valid for the Bedrock version available on Windows 10, mobile devices and consoles.

Starting from what can be done without commands and "tricks" of various kinds, in Minecraft it is allowed to make one structure for purely aesthetic purposes. I say this because I also tried to "lock up" a merchant found in a village inside the building, in order to create a sort of functioning shop, but without success: apparently, the developers of the game have thought well about the mechanics and so, after some time, the NPC loses his skills as a merchant making the effort to "catch" him useless.

In this first part of the guide I will therefore dedicate myself to the simple realization of a design for a shop. More precisely, I decided to create an aesthetic "like fast food" structure, useful only to contextualize well within the village, but then in reality you will not need it for the purposes of the gameplay (later, however, I will explain how to use the "tricks" to make it "working").

To start creating the building, place on the ground 6 smooth quartz blocks. After that, place others 4 blocks on the sides e "Close" the rectangle. 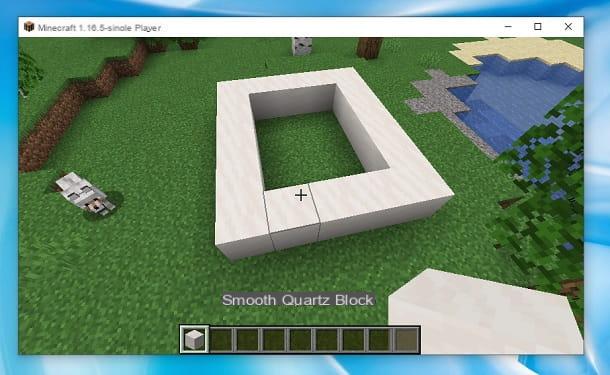 At this point, create gods 4 block high walls in total on all sides, leaving the roof and the two central lines "open" in front of the structure. 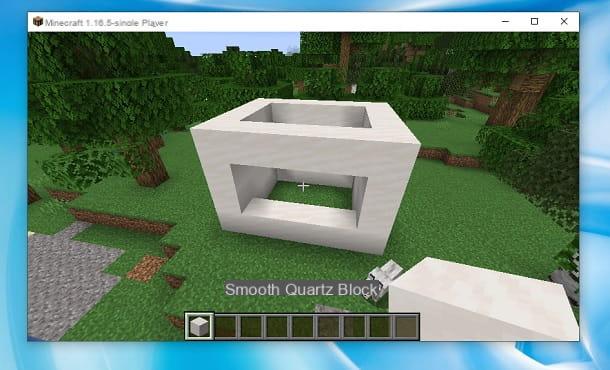 Therefore, create one top layer 2 blocks high of smooth quartz at the top in the front of the building e "Cover" the roof with brick slabs. 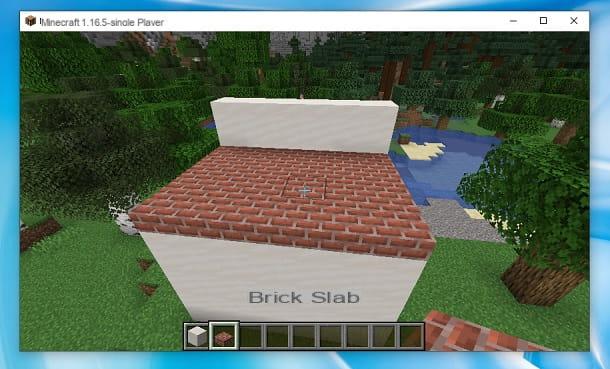 Once this is done, go to the front of the structure and place 4 brick slabs just above the front opening e 4 brick steps facing up at the bottom of the building. 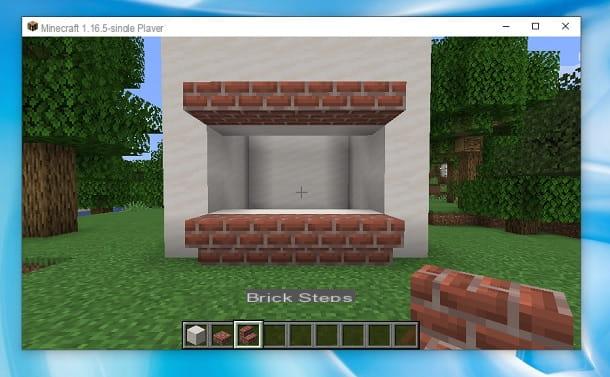 Now, enter the structure through the front opening, break the blocks on the ground and replace the floor with smooth quartz. 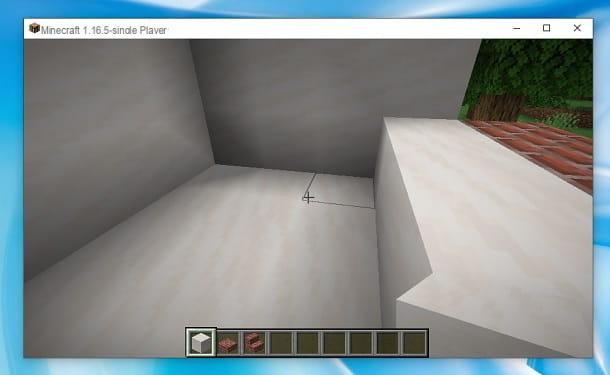 Then, position at the top, in the penultimate block, always remaining inside the structure but looking towards the rear of the latter, 4 trunks.

Once this is done, place the dark oak hatches at the bottom in the white blocks of the counter and at the top. 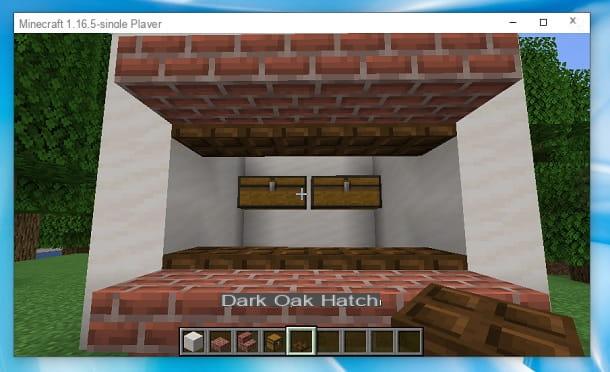 Now, to give an extra "touch" to the building, I suggest you go to the left side of the structure, break the third block at the bottom starting from the left and the one above it. In their place, create one iron door (designed for the "personal"). 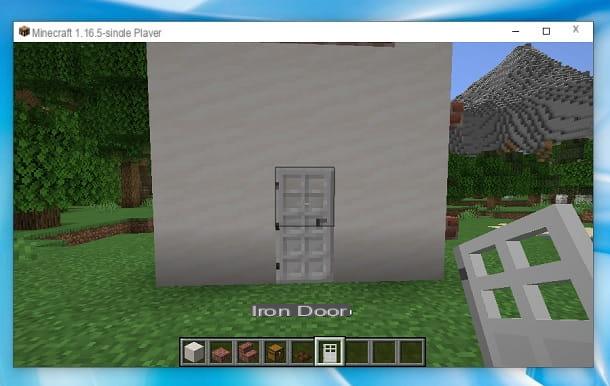 Enter, therefore, inside the structure and square 2 fornaci on the back wall: one on the right and one on the left. In the center, however, moved to the left, put a tripping wire hook, positioned at the top right of the first furnace. In the bottom 2 blocks in the center put 2 hoppers. 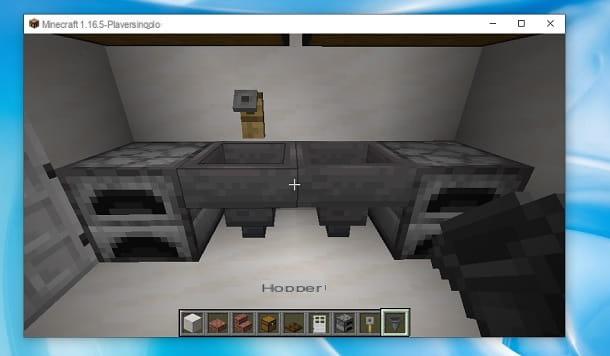 Perfect, now the inside of the building is complete. So you just have to get out of it and create the last missing element: theteaches up.

You can obviously indulge yourself as you like in this sense, but, if you want some advice, you might think about using some black terracotta to create, for example, a large one F di Fast Food, extending the front blocks of smooth quartz.

By doing so, you will be able to give life to one structure pleasing to the eye and that can be seen from afar. Furthermore, you can use your fantasy to try to modify it and contextualize it in the best possible way within your specific village.

For the rest, if you want make it really work the building, you need to go through the Creative mode. Once you have started a game of this type (I remind you that you can also change your world mode), open theInventory (e.g. by pressing the button E su PC) and put theTraveling Merchant Spawn Egg ("Egg of a Wandering Merchant" in the Bedrock version). 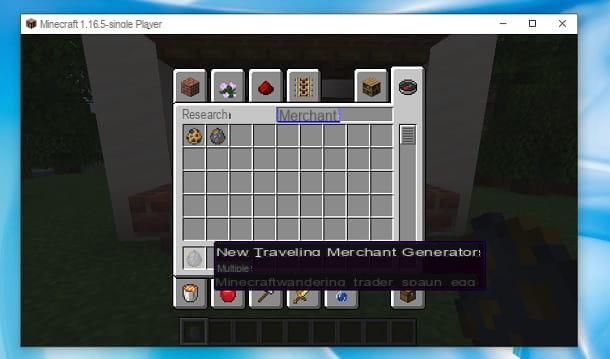 Use, therefore, the latter inside the building you created earlier and that's it: you can interact with theNPC (non-player character) to purchase the classics objects at your disposal, thus making your shop a real shop. 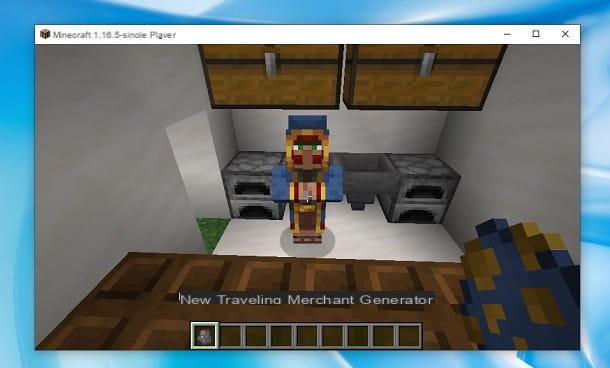 Of course, I am aware that this is not exactly the most suitable merchant for a "fast food", but in terms of aesthetics it suits us and can be easily generated as many times as you want through the egg. Also, this way you have at your disposal a shop that sells a bit of everything.

Moreover, the merchant will not be able to get out of the facility and it will always be at your disposal, as the building was built specifically not to let him escape. So don't worry if you see him jumping: he can't do anything. 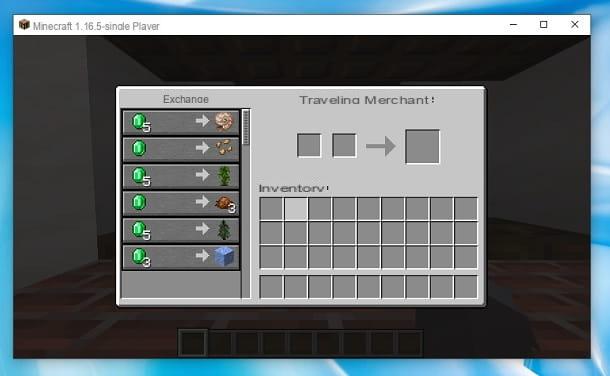 If you want, instead, to appear in the Java version for PC of Minecraft, a agricoltore or butcher, that is the characters who sell food and therefore contextualize themselves better in a food store, you have to go through i commands. If you don't know how to enable the latter, I recommend that you follow my guide on how to activate the cheats on Minecraft.

In any case, they usually are enabled by default in Creative (I remind you that you can also change your game mode). So you just need to enter the shop, open the command console (e.g. by pressing the button T su PC), digitare /summon villager ~ ~ ~ {VillagerData:{profession:“minecraft:farmer”,type:“minecraft:plains”,level:2}} e dare confirmation. 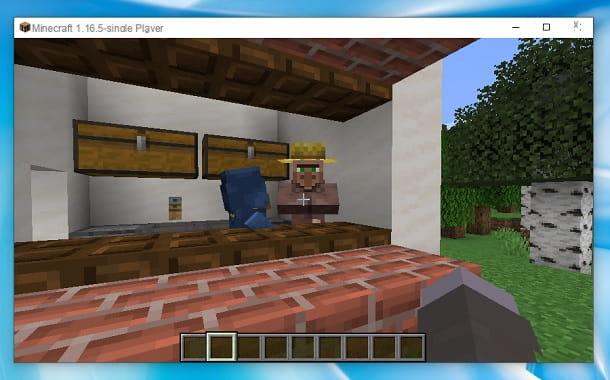 By doing so, a agricoltore where you are, or inside the structure, and you can keep it there just like the traveling merchant.

If you want, instead, the butcher, the command to use is / summon villager ~ ~ ~ {VillagerData: {profession: “minecraft: butcher”, type: “minecraft: plains”, level: 2}}. Of course, you can summon these characters as many times as you want. 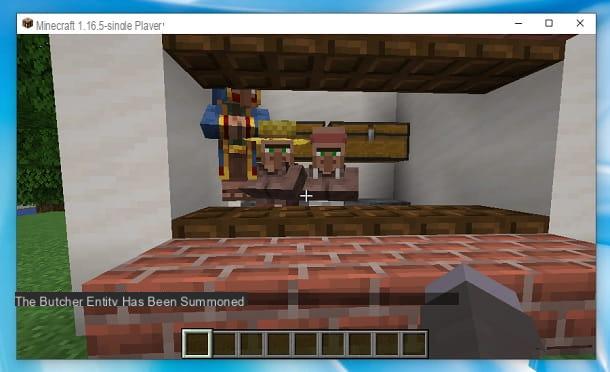 Perfect, you have now successfully populated your store and of course you can choose the NPCs that you think are more suitable for the structure. You just have to interact with them and use the emeralds as a currency to buy objects, just like in a "normal" game in Survival mode.

For the rest, if you want prevent the characters from continuing to jump, you can of course create a roof just above their heads, so that they can no longer do it. 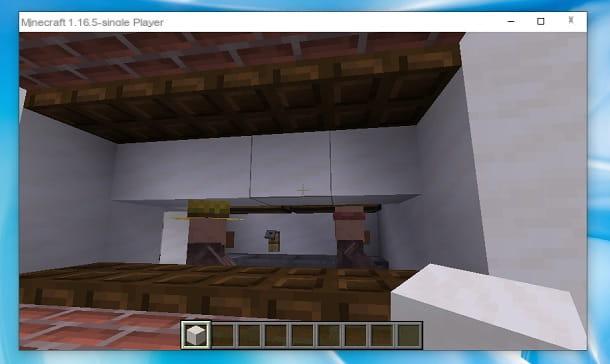 For completeness of information, you should know that, over the years, users have also managed to find methods, using various combinations related to blocking commands, to create shops capable of returning elements that go beyond the classic ones offered by the NPCs of the game.

However, in this case the procedure varies from version to version and the variables involved are many, therefore I will not go into more detail here, but it seemed right to inform you also about the fact that this possibility exists.

Mod to make a shop on Minecraft 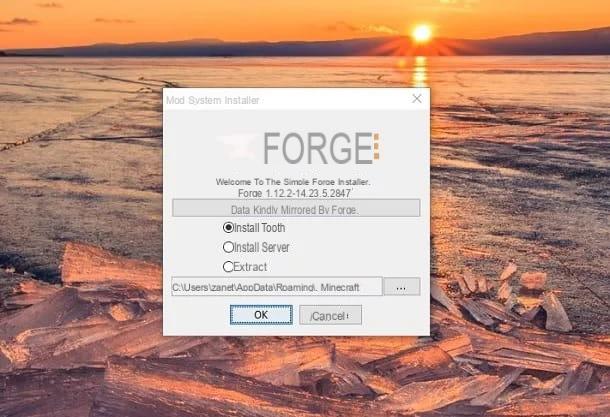 How did you say? I had itedit Java for PC di Minecraft and would you like something more in-depth for your shop? No problem: I'll explain immediately what you can do, passing through the against call Admin shop, available for the version 1.12.2 of the Mojang title (I remind you that it is possible to change Minecraft version very easily).

In order to take advantage of this mod, you need to have the correct one available Profile to be able to use the content created by the community: Forge. As for the latter, I invite you to consult my tutorial on how to install Forge (you have to do it for version 1.12.2).

As for the content, however, you can make the download of the mod directly from the Curseforge website, by pressing the button Download present on the right. By doing so, you will get the adminshop-[versione].jar. The latter must be positioned in the classic mod folder, which generally on Windows it is found following the path C: Users [username] AppDataRoaming.minecraftmods. In regards to MacOSinstead, the path is ~ / Library / Application Support / minecraft / mods.

In any case, if you've used other mods for Minecraft before, you shouldn't have any problems. Once a game has started in Creative mode, selecting the correct one in the launcher profile forge, you just need to press the button E keypad to access theInventory of your character.

Once this is done, click onright arrow icon, present at the top, and select themod icon, in order to access the elements added by the latter. From here you can select, for example, the object Shop and place it on the ground. 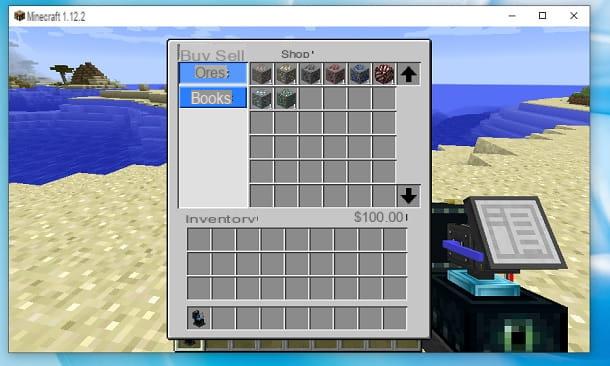 By interacting with the latter, you will be able to buy the items and make your shop even more useful. You can obviously use as a basis, on an aesthetic level, the structure that I explained to you how to build in the previous chapter.

I don't want to give you any further spoilers about the other possibilities offered by the mod, as I assure you that it is worth exploring them independently.

Perfect, now you know a little bit of everything there is to know about the possibility of build a shop in Minecraft. For the rest, since you are a fan of the Mojang title, I would advise you to take a look at the page of my site dedicated to Minecraft, where you can find many other tutorials that could be for you.

add a comment of How to make a shop in Minecraft