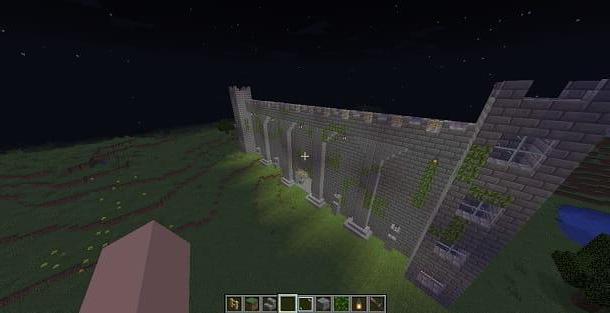 Before explaining to you how to make walls in minecraft (the indications are valid for all editions of the game), it is good that you identify the ones that are most suitable for you for the type of construction you want to create.

For example, you might think about creating walls that have only an aesthetic purpose, focusing less on the functional side of them. The walls of houses, in fact, they are usually built simply following the structure of the house, without thinking too much about a way to make them practical.

The walls of castles. Since castles are generally quite large, there is more room for creativity and, therefore, to create walls that are especially well-finished from an aesthetic point of view.

Obviously, however, it is also possible to build defensive walls, focused precisely on methods to be able to defend your home from external threats. While these can also be useful against monsters, it is recommended to build defensive walls especially when playing in multiplayer, as the threat of enemy players is far more formidable than that of monsters. 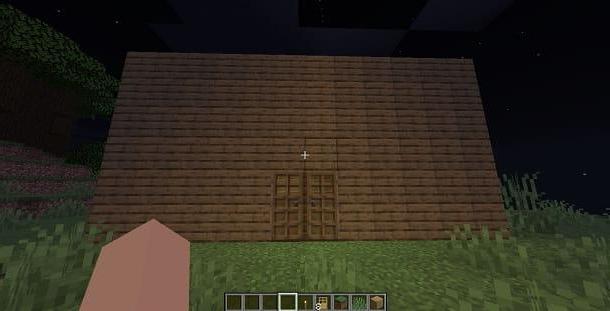 A very common element in homes of players with little experience in Minecraft is the fact that the walls are composed of only one type of block, making them monotonous to the eye. Of course, this isn't necessarily a bad thing, but if you're looking to create something more unique, you'll need to have a few blocks and a little more imagination. 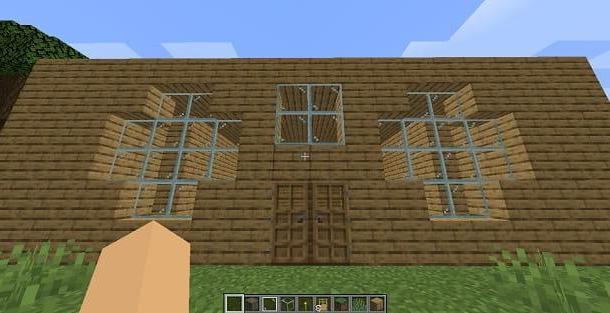 The first thing you could do to beautify the walls of your home, for example, is add some windows. Although it may be obvious as a thing, you can "play" on the arrangement of glass and create a more complex fantasy than simple square or triangular windows: you could, for example, think of arranging them in the shape of a flower, triangularly or even only in certain holes.

Also, don't forget that you can resort to using Coloured glass to make the walls more lively, or even ai glass panels, to create stained glass windows.

Another piece of advice I feel like giving you is to add gods contours to the elements of the walls. This means that if there are doors or glass on a particular wall, you may be surrounding them with blocks other than the ones you built the walls with. By doing so, these elements will stand out more, as well as give more color to the foundations of the house.

Obviously I invite you to do not overdo it with these kinds of tweaks, as you might get the opposite effect. For example, if you are building walls that are not too big I suggest you limit this type of modification, as you could end up overdoing it and making the walls of your home too chaotic. 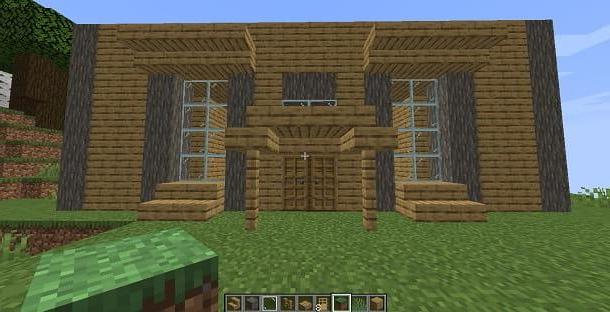 Later, even adding steps e ballast it could help in creating a more varied design. By placing this type of blocks, for example, in the corners of certain elements of the walls (such as windows and doors), you can give your home more dynamism, making it more pleasing to the eye. 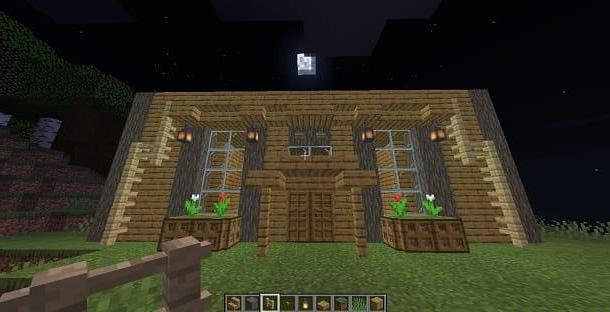 Finally you can add some decoration to complete your walls. These also include items such as fences o bottle, although their use is not originally used for decorative purposes.

Also, don't overlook the fact that you might light up your walls in case you want them to be visible even during the night. If you don't want to use the typical flashlights, you can also resort to bright blocks o lantern. 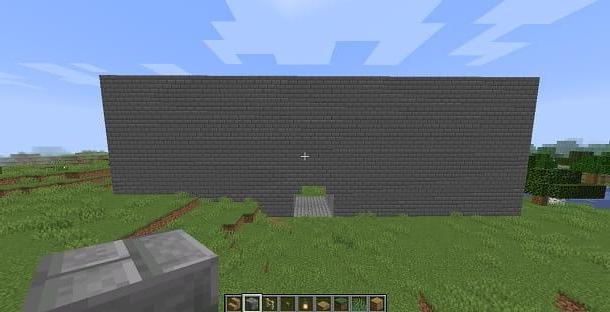 If you are looking to build walls for a castle in Minecraft, the first thing I recommend you to do is to create them using blocks of Stone, or derivatives of the latter. This will help you to give a more realistic effect to the whole, going to recall the material that the royal castles are made of.

I also recommend that you give it some thick block and leave them empty inside, so as to make it possible to move and build inside them and not waste precious space. 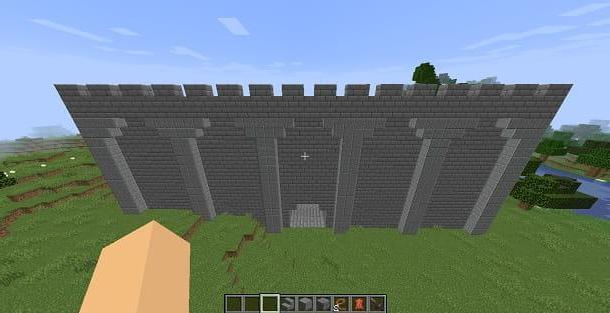 Later you could add some elements that go to give dynamicity to the walls, for example gods pillars. Also, I advise you to give the right attention to the upper part of them, perhaps adding some blocks that give the idea of ​​doing from divider. 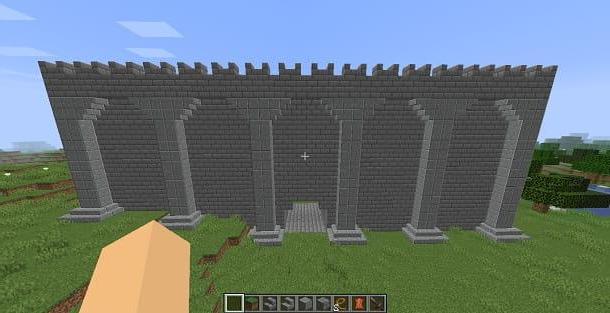 Again, I recommend that you make use of steps, which can greatly help to give a less “cubic” and more structured image of the walls. Obviously I recommend that you use steps that are made of the same main material as the walls, otherwise you risk that they will clash with the context in which they are located. 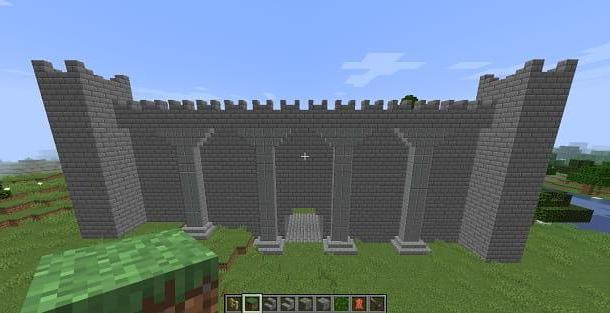 The typical ones cannot be missing watchtowers at the corners of the walls. For their construction, I advise you to start by leaning a couple of blocks towards the outside of the walls, so that these too can have their dynamism.

Also remember to leave the space inside them empty, just like the rest of the walls. By doing so, you can use the space to create a passage that leads to the highest part of the towers. 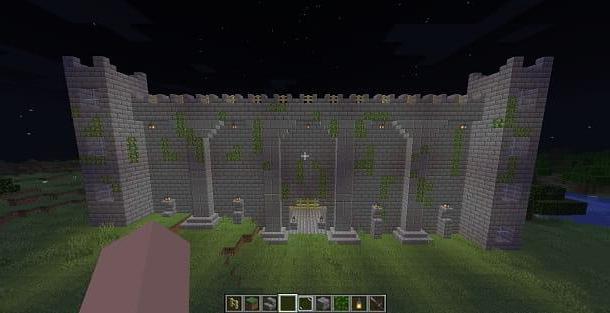 Finally, you just have to add a few decoration to complete the work. You can include gods glass as for the watchtowers, while you can use the classic ones fences for the top.

Also, if you want to give your walls a “worn” effect, you can also place some creepers, which will camouflage the castle with the environment, giving the idea that it has already been built for a while.

As for the door, you can add some there too fences to simulate a gate. In case you prefer a working door, however, I suggest you consult my guide where I show you how to make a piston door. 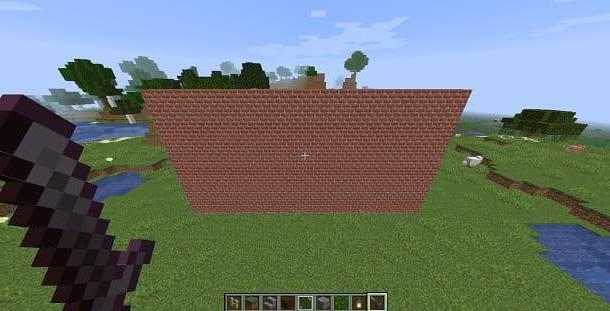 Before going to build some defensive walls in Minecraft, you should determine the entities from which you actually need to protect yourself, namely i monsters or i players. 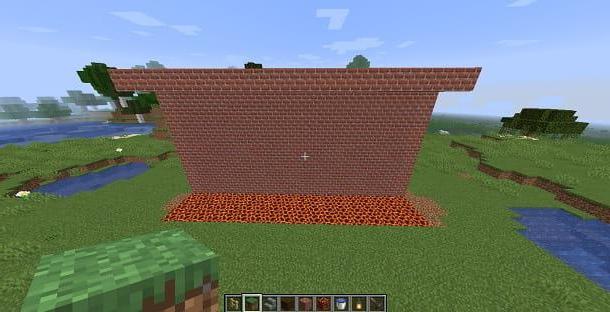 If the threat you want to defend yourself against is that of the monsters, the first thing you can do is surround the walls of your home with washed o blocks of magma, so that any monster that follows you will inevitably end up burning.

Also, you might as well widen by one block the highest part of the walls, so as to prevent spiders from climbing and climbing over the walls. 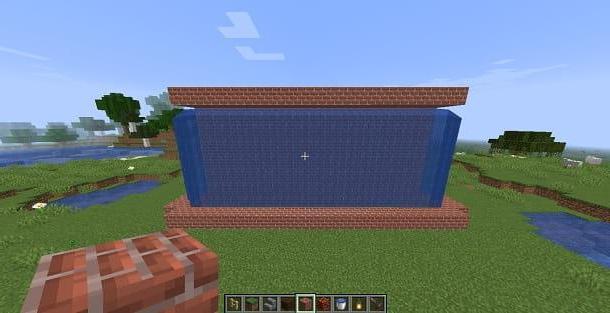 In case you want to build walls to protect yourself from playersinstead, I strongly recommend that you surround your walls withwater. The reason for this is that this can save your home from any cannons of TNT, nullifying the explosions and, consequently, the damage they would have caused. If you use this method, remember to close the top of your house, so as to prevent any players from getting there thanks to the water.

An alternative to water are the blocks of obsidian, thanks to their high resistance to explosions. Unfortunately, however, creating walls with this material is very expensive due to the time required to procure a large amount of it, so it would be optimal to use it only when it comes to structures with not overly large dimensions.

Finally you could also place some trap outside your walls to make the defense of your base even more efficient. If you would like to create some, I refer you to my guide where I show you how to make quicksand in Minecraft.

Mod to make walls in Minecraft 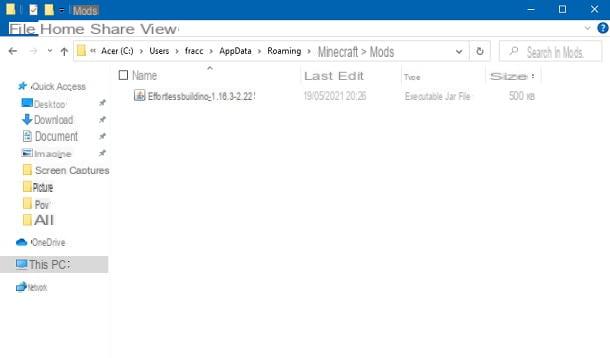 If you are looking for a more effective method than the traditional ones to build walls in Minecraft, then my advice is to resort to the use of a against. Thanks to these, in fact, you can add new blocks or features to the game, modifying it as you prefer.

Before proceeding with the explanation, I must warn you that mods are only available for the Java Edition of Minecraft, which is only available on PC. This means that, unfortunately, it is not possible to use mods on the game's Bedrock Edition, which is available on consoles, on mobile devices and on Windows 10.

Furthermore, I recommend that you always pay attention to the sites of this kind that you visit, as you could run into some deceptive page that could carry malware. Therefore, I advise you to check the reliability of the sites whenever you are not sure that they are safe.

To use mods in Minecraft you need additional software, namely Forge. In case you don't already have it, I refer you to my specific tutorial where I explain how to install Minecraft Forge.

The mod I recommend you use is the Effortless Building, which adds functions designed to facilitate the construction of structures. Thanks to this mod, it is possible to create walls in a few seconds, regardless of their size.

To download it, just visit the official page of the mod and click on the button Download. I invite you to make sure that the version you download is compatible with the version of Forge you own, otherwise the mod may not work correctly (however, know that you can change the version of Minecraft very easily).

Once the mod is downloaded, you need to drag and drop the fillet inside the Minecraft game folder. To get it on Windows, press the key combination Win + R to call up the menu Run, then type % Appdata% in the panel that appeared on the screen and press Submit on the keyboard.

At this point he arrives at the folder .minecraft> mod and drag the fillet of the mod within it. You may need to turn on the display of hidden folders.

Stai using a Mac, you can find the Minecraft mod folder by following the path below: ~ / Library / Application Support / minecraft / mods. 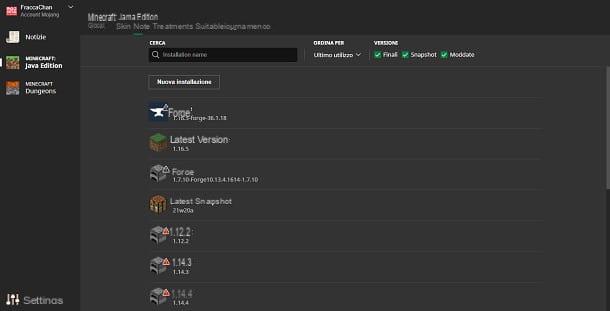 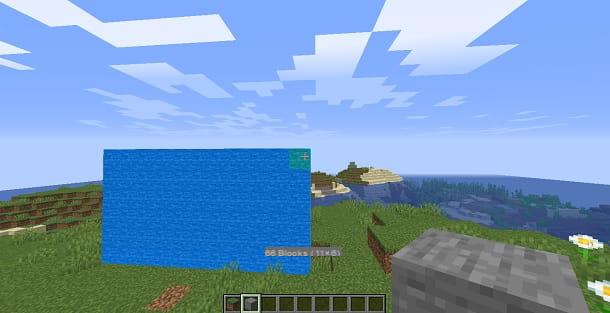 That's it, you just have to open a world to your liking and start using the mod! Effortless Building adds the ability to build at a much greater distance than normal. In addition, entire structures can be created with a couple of clicks, without wasting too much time on construction.

Pressing the button Other on the keyboard you can see all the shapes that can be created. To create a wall, just select the button Wall and start building. Alternatively, by selecting the key Diagonal Wall you can also make one diagonally. In short, you really have no more excuses not to start building the walls you've always wanted to do!

add a comment of How to make walls in Minecraft