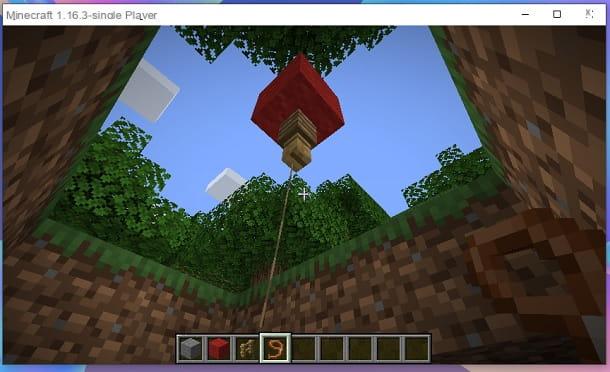 Before going into the details of the procedure on how to make balloons in minecraft, I think it might interest you to know more about this possibility.

Well, basically the game does not allow you to make real balloons. However, if you know the mechanics of Mojang's title, you will know that, after all, in Minecraft the only limit is the imagination. For this reason, using the standard game it is still possible to give birth to gods aesthetic balloons, which are well contextualized in a house or outside.

If you want to build the structure quickly you can do it in Creative mode, where you already have all the necessary items within the inventory, but in case you want to carry out the whole procedure in Survival mode, below you can find information on the materials to be used.

As for the Java version for PC of the game, you can make use of stone blocks e red woolas well as one oak fence and a leash. These are not too difficult items to recover, so you shouldn't have too much trouble finding them in Survival mode.

In the version Bedrock (for Windows 10, smartphone / tablet and console), on the other hand, the balloons exist as an element if the Education Edition mode is enabled. In this case, the elements to use are 6 latex units, a unit of helium, a unit of any dyeing it's a leash.

If you want to create something more concrete, in the course of the guide there will also be a chapter in which I will show you how to use a against for the Java edition of Minecraft for PC which allows you to make balloons that can make your character fly.

In short, there are solutions for all tastes and for all editions of Minecraft. Obviously, if you have the Java edition for PC, better, as you will be able to access all the possibilities, including the one that involves the use of material created by the community, but also with the other editions you should be able to obtain appreciable results.

After showing you the various possibilities available, I would say that it is time to take action and explain how to make a balloon in Minecraft.

To start, place 2 stone blocks and 1 by red wool, one above the other, on the ground. 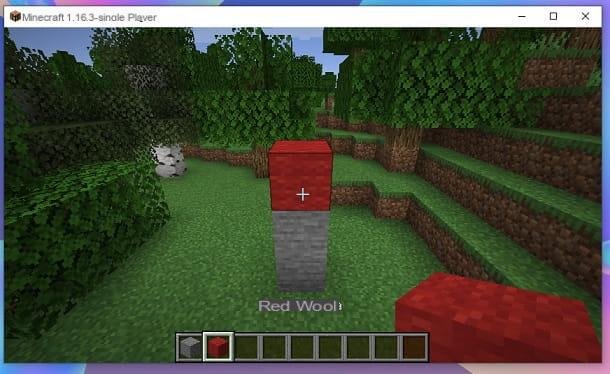 Therefore, break the stone blocks below, so as to let the top of the balloon "float". 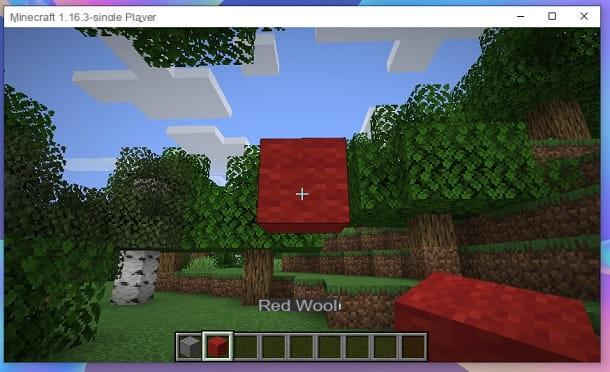 After that, take one oak fence and place it under the top of the balloon. 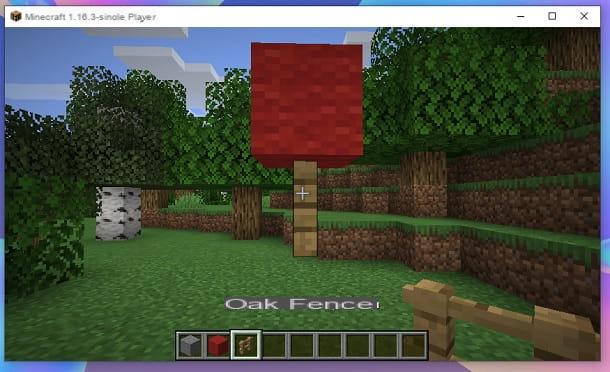 At this point, get a leash and go in search of an animal. Therefore, use the leash on theanimal and take it to the area where the top of the balloon. 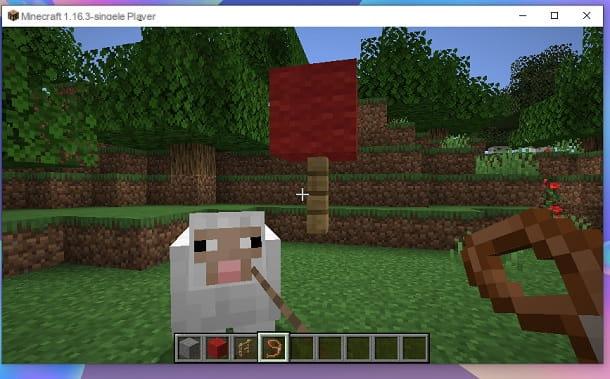 Subsequently, make a deep enough hole, so that the animal can no longer get out, e attach the leash to the oak fence. I know: it's not exactly the best thing from a moral standpoint, but it's the only way to have a balloon-like string. Besides, it's just a game! 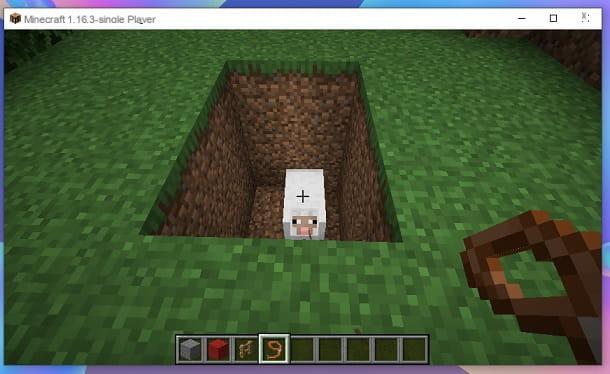 This way, you will have yours aesthetic balloon. Obviously, to get a better result, you might want to think about capturing a rabbit, since it can "fall" even in a single block.

Either way, you can close the ground to get a better result: the rope will not break. Additionally, you may also think about making gods taller balloons, as well as to use other blocks of wool to have balloons of different color. 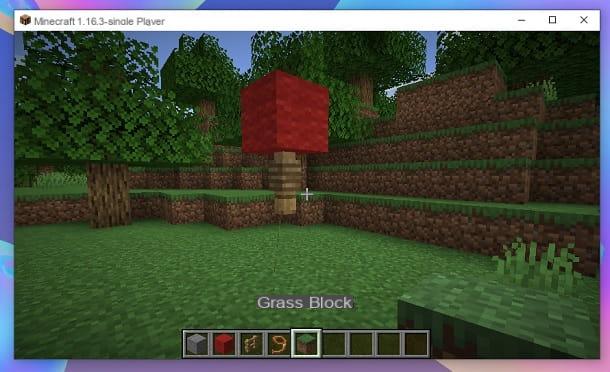 If you have the Bedrock or that Education Edition of Minecraft, you could take a look at the Mojang title Wiki (in English), as in that case there are elements of the periodic table which, when combined in the right way, can allow you to create a balloon.

More precisely, in Creative mode, the first thing you need to do is place a compound creator.

After that, interact with it, place 5 carbon units top left, and cover the four blocks on the right with thehydrogen, leaving 5 units of the latter in the lower right block. This way, you can extract the latex. Just click on its icon to automatically move it to the Quick Inventory.

At this point, place a on the ground bank gives lavoro.

Interact, therefore, with it and position 6 latex units on the side. I remind you that, for divide one element from mobile devices, that's enough keep pressed on it, making it fill the green bar the amount you want to move, and then tap on an empty box where you want to place that quantity.

After that, place a unit of in the center helium, a dyeing above and a leash down.

Perfect, now you can move the balloon that you created in yours quick inventory and use it.

I remind you that, to set the mode Education Edition version Bedrock of the game, just go to the menu of games create, click onpencil icon, move to the tab Game, enable the option Education Edition and press the button Continue.

In short, now you know all the possibilities of the case offered by the various editions of Minecraft as regards balloons.

Mod to create balloons in Minecraft 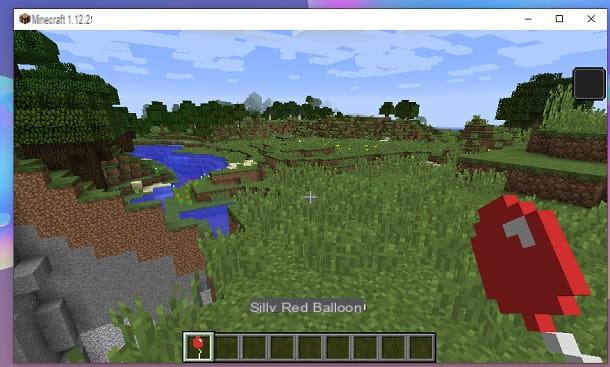 How do you say? You don't have the Bedrock / Education version available but would you still like to have some “real” balloons in Minecraft? No problem, I'll explain immediately how to do it regarding the version Java by PC of the title of Mojang.

In particular, to achieve the goal, I will use the mod called Balloonz, compatible with the version 1.12.2 of the game. It is one of the most popular editions among lovers of community-made content, but if you don't have it, you can refer to my tutorial on how to change the version of Minecraft.

In any case, to install the aforementioned mod you will need the profile forge. To install the latter, just connect to the official Minecraft Forge portal, click on the button Show all Versions, click on the link Installer present next to the version 14.23.5.2768 (required for the mod), click Skip (to skip any announcements) and start the file forge- [version] .jar obtained.

Next, check the box Install Client and fai clic sul tasto OK, in order to finish the installation of the Forge profile. 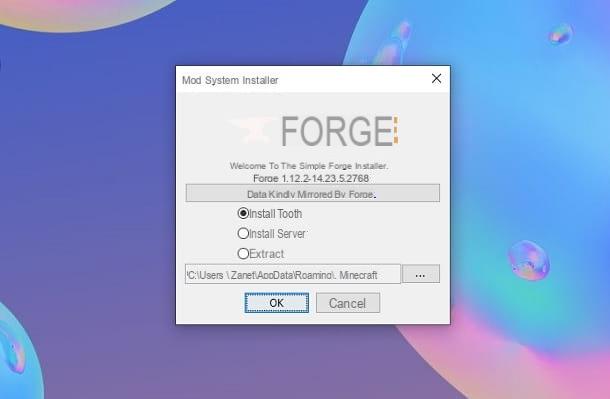 At this point, connect to the CurseForge website and press the button Download, in order to obtain the file balloonz- [version] .jar.

Now, you just have to move / paste the latter in mod folder of Minecraft. On Windows, the path to follow is C: Users [username] AppDataRoaming.minecraftmods, while on MacOS is ~ / Library / Application Support / minecraft / mods. If you can't reach the path on Windows, I recommend that you turn on the display of hidden folders. 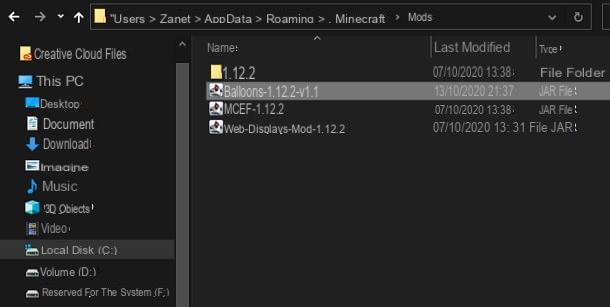 Once entered a game in Creative mode, premium pulsating E on the keyboard, click theright arrow icon e premi sull 'balloon icon. This way, you will see all the elements added by the mod. 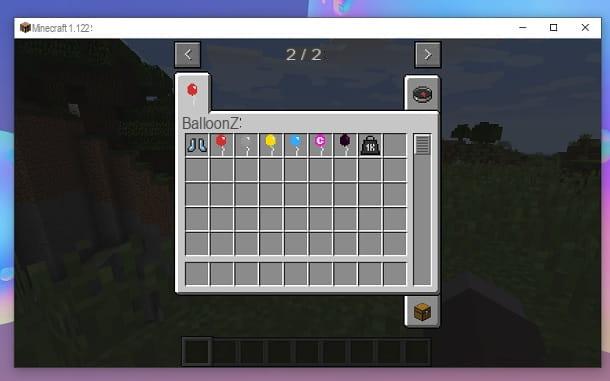 Move, therefore, one of the balloons inside thequick inventory and have fun with the new items at your disposal.

For the rest, since you are a fan of Minecraft, I would recommend that you take a look at the page of my site dedicated to the title of Mojang, where you can find many other guides that could be for you.

add a comment from How to make balloons in Minecraft