How to make a golem in Minecraft 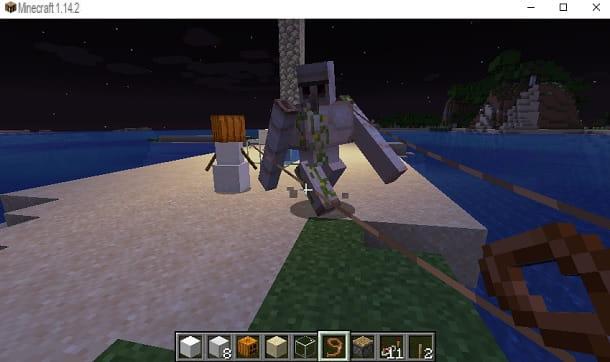 Prima di enter the dettaglio della procedura su how to make a golem in minecraft, I think it might interest you to know, in detail, what these characters are for and to know all their variants.

Well, golems are usually used by Minecraft players to defend themselves from enemies in the game, such as creepers or zombies. In fact, golems, which are controlled by artificial intelligence, automatically detect enemies and attack them to protect their master, or a village.

There are two types of golems in Minecraft: that of iron and INFO. The former is able to unleash close-range attacks that inflict a lot of damage on the enemy, while the latter throws snowballs from a distance and is very useful for defeating rare creatures, such as blazes.

By default, both types of golems can follow the player on a leash, but they can also be placed inside a fence to defend a village.

How to make an iron golem in Minecraft

Il iron golem is the creature of this type most used in Minecraft. In fact, it has 100 life points and is able to inflict a lot of damage to all the enemies present in the Mojang title. 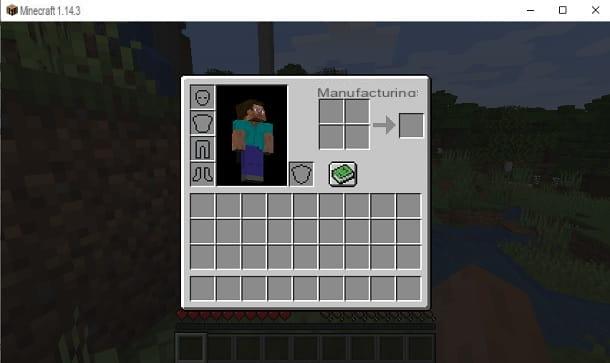 Before you can build an iron golem, you need to get the necessary materials, wandering around the world of Minecraft. In any case, my advice is to try to build the golem first in Creative mode, where you will already have all the materials you need.


The first material you need is obviously the raw iron: to get it, you need to create a stone pickaxe and start digging the earth, looking for gray blocks with brown "spots".

My advice is to stock up on raw iron and return to the surface. I also invite you to bring some torch and blocks, so you don't get stuck in the depths of the Minecraft world.

In case you haven't created a stone pickaxe yet, you can do it by merging 3 blocks of crushed stone (arranged in the upper part) e 2 sticks (arranged in the middle of the second and third row) across the grid 3 x 3 for crafting. If you don't have the latter yet, just create it by entering 4 wooden blocks (or other material) in the crafting menu and thus obtaining a bank gives lavoro.

You can access the crafting grid 2 x 2 from survival mode by pressing the key E (PC), triangle (PS4/PS3), X (Nintendo Switch) or Y (Xbox One / Xbox 360). As for the crushed stone blocks, I recommend that you consult my guide on how to make a Cobblestone Generator, which is an infinite generator of crushed stone blocks.

Once you have the raw iron, you need to use the furnace and add any fuel to get iron ingots.

The furnace is obtained by joining 8 blocks of crushed stone in the grill 3 x 3 for crafting (leaving the central block empty), while fuel can also be a bucket of lava or a Coal block (which is manufactured with 9 Charcoal items). Coal can be obtained by destroying i Coal blocks with the stone pickaxe. Your goal is to get at least 36 iron ingots.

At this point, you need to use gods pumpkin seeds and plant them on the ground, waiting for a carved pumpkin to grow. Pumpkin seeds can be obtained by inserting a pumpkin in the crafting menu. Common pumpkins can be found around the game world. I remind you that the seeds must be planted in a land near the water.

Perfect, now you have everything you need to build an iron golem! 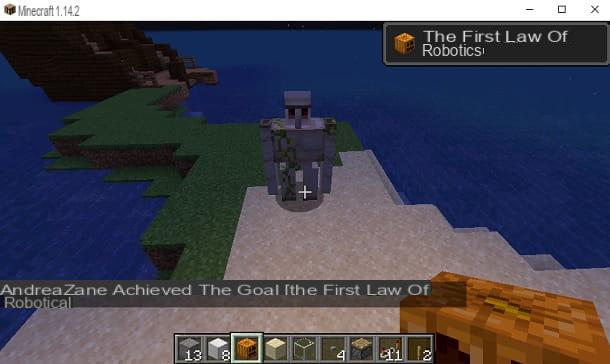 After explaining what materials you need to build an iron golem, I would say that you are ready to proceed with its creation.

To do this, you must first place the 4 iron blocks T-shaped 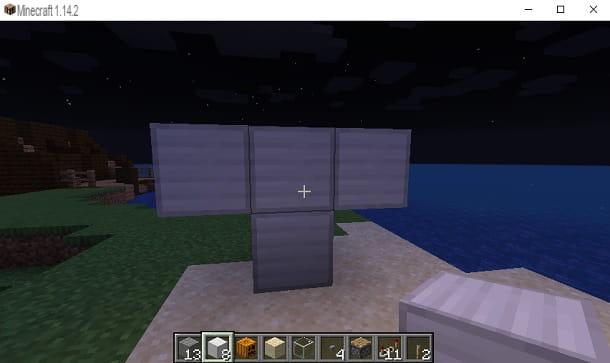 After that, you just need to place the carved pumpkin at the top of the structure and that's it. 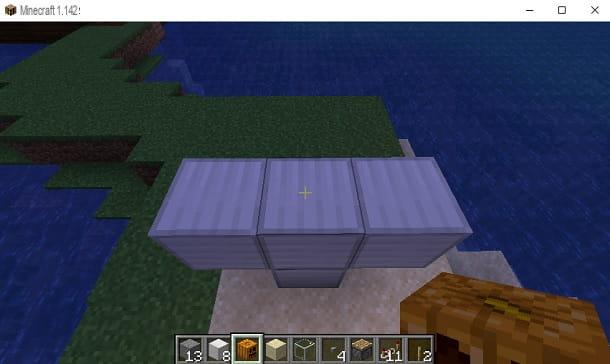 I remind you that you can take the iron golem for a walk with you using a leash. A leash is created by joining 4 cords to slime ball.

Great: you created your first iron golem and now you can take it for a walk with you using a leash!

How to make a snow golem in Minecraft

As already mentioned above, the snow golem is capable of throwing snowballs from a distance. His attacks are only capable of taunting most enemies, while they can defeat blazes. 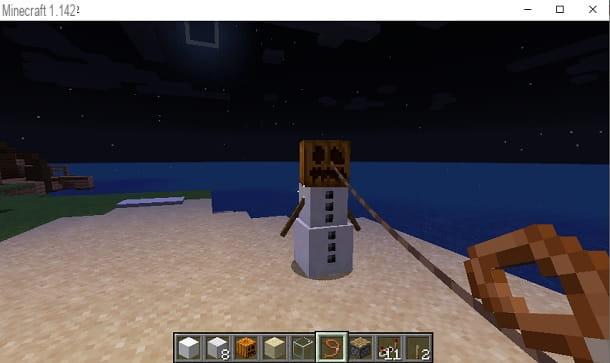 Well, you need them 8 snowballs (two blocks of snow) and one carved pumpkin. To get the snowballs, you first need to craft one Pala, which is manufactured by combining all types of axis (or an iron ingot, a gold ingot or a block of rubble) with 2 sticks. The latter, on the other hand, are created by uniting two different types of axes in the crafting menu. In turn, the axes are manufactured through i wooden logs, which can be obtained from trees.

Once you get the shovel, you need to find a snowy area and destroy the snow blocks, collecting 8 snowballs. After that, press the key E (PC), triangle (PS4/PS3), X (Nintendo Switch) or Y (Xbox 360/Xbox One) e inserisci 4 snowballs within the crafting menu. By repeating this operation twice, you will get two blocks of snow.

Now, just get gods pumpkin seeds and plant them on the ground, waiting for a carved pumpkin to grow. Pumpkin seeds are obtained by inserting a pumpkin in the crafting menu.

To find a common pumpkin, you simply have to wander around the game world. I remind you that the seeds must be planted in a land near the water.

Perfect - you've found all the materials you need to make a snow golem! 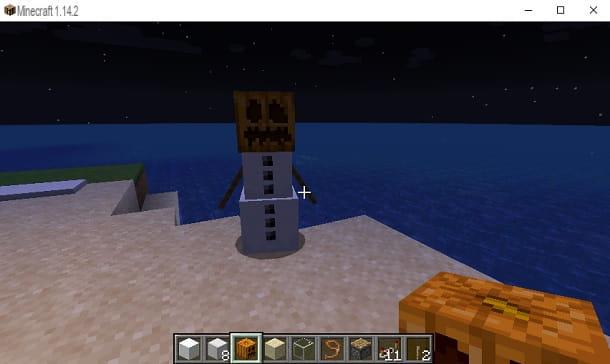 After showing you the materials you need to get a snow golem, I think you are ready for its creation.

To create a snow golem, the first thing to do is place it 2 blocks of snow one over the other. 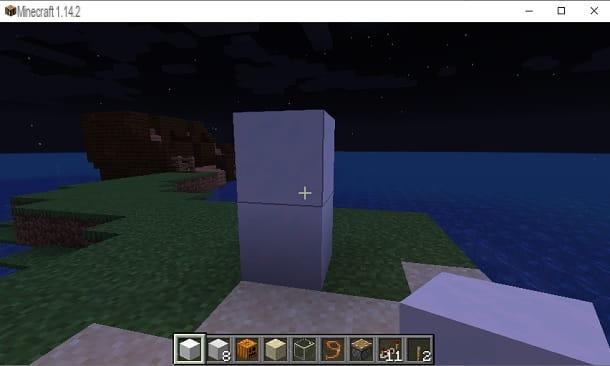 At this point, place the carved pumpkin over the snow blocks and the snow golem will come to life.

The snow golem can also be carried for a walk with a leash, which I remind you can be built through the use of 4 cords it's a slime ball.

The former can be obtained by defeating the spiders present inside the caves, while for the second you have to defeat him slime, an enemy that often appears in swampy areas. 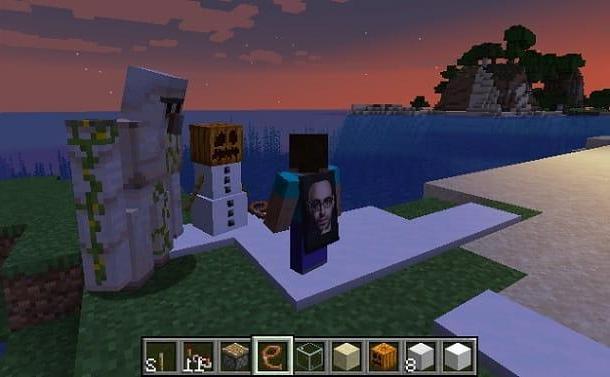 For more details on the materials and objects mentioned, I suggest you take a look at the Minecraft encyclopedia, an inexhaustible source of information on the Mojang title.

In short, I would say that you have achieved your goal. All you have to do is take the snow golem and the iron golem with you on your adventures. Good fun!

How to make a golem in Minecraft

add a comment of How to make a golem in Minecraft