How to make banners in Minecraft

How to make a banner in Minecraft 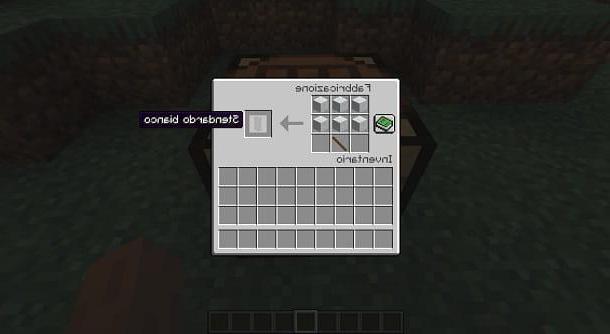 create a banner in Minecraft, what you need to do is procure the necessary resources to perform this feat. First, you must have a Bastone. This you can make easily, by putting 2 units of Wooden Planks in a workbench.

In addition to this resource, you will also need the Lana. The latter can be obtained by shearing the sheep that you find around the world of Minecraft or that you have appropriately raised in your shelter. However, you shouldn't have any trouble finding sheep in Minecraft.

All you have to do to get some wool is to simply equip yourself with Shears, to perform the shearing operation. Don't own the shears? Don't worry, all you have to do is merge 2 units of Iron Ingots in a workbench, previously melted in a furnace from Raw Iron.

After having recovered all the resources I mentioned in the previous paragraphs, you just have to place them on a workbench: to be exact, you will have to place 6 units of Wool e 1 units of Staff, so as to obtain 1 unit of Banner.

I warn you that the banners you will be making will all be in a solid color. In most cases, they will all be banners of White color, as the sheep you find scattered around the world of Minecraft are mostly characterized by a white coat. If you want to know how to get colored banners, I invite you to continue reading in the next chapter.

How to color banners in Minecraft 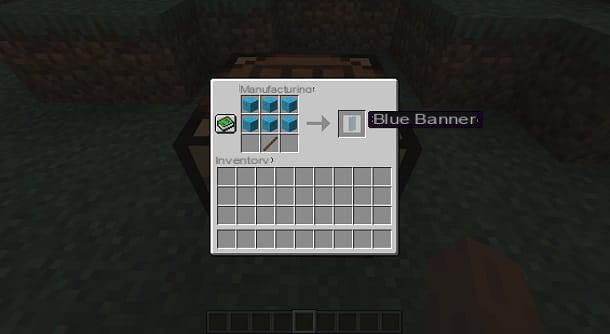 If you want to get some colorful banners on Minecraft, what you need to do is change the color of the wool. In fact, the wool you get from shearing sheep is mostly white and only on some occasions you could get it black, in shades of gray or, in other rare cases, brown or even pink.

You can obtain these dyes by inserting, in a furnace, the corresponding ingredients that you can collect in the world of Minecraft: most of these are obtainable from plants, except the white and black, which are obtained respectively from the Bones and from Ink bag, which is released by the octopuses.

When you are in possession of the dye, all you have to do is put 1 units of Wool together with 1 unit of Dye in a workbench. The result will be 1 unit of Colored Wool, which you can use to craft a banner. At this point, following the same procedure that I have already indicated to you in the previous chapter, you will be able to manufacture a colored banner, always in solid color.


How to make custom banners in Minecraft 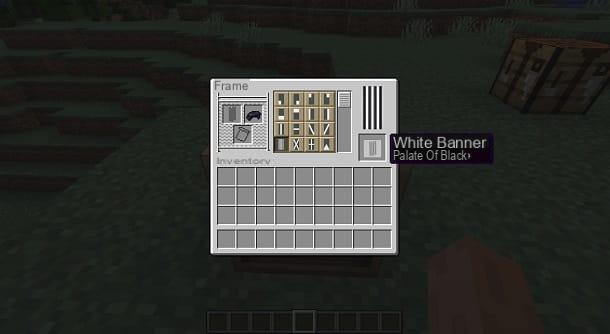 In Minecraft it is possible to create banners by customizing their texture. In fact, as I have already anticipated in the first chapters of my guide, the banners are in fact in one color. Although you can color them, these will still be solid colors.

Thanks to a specific tool, the Chassis, it is possible to change the texture of the banner, for example by applying specific lines or geometric shapes. To manufacture this tool, you have to insert, in a workbench, 2 units of Wooden Planks e 2 units of Lanyard. While the first material is readily available by dismantling the Logs of Wood in a workbench, you can get the Lanyardmainly by defeating the spiders.

After manufacturing the Chassis, interact on it, to view its interface. There are three slots on the left side: one is intended to accommodate the Standard, one serves for the Dye, while the other for figure. In this chapter I will not explain how to use this last slot, as I will postpone the explanation in the next chapter.

Before you start editing the storyline, you need to make sure you have the items that are useful for the first two slots: therefore, you will need to have already crafted one Standard it's a Dye. For the first object, I refer you to what I have already illustrated to you in the first chapter; for what concern DyeInstead, I told you about it in detail in the chapter dedicated to the coloring of the banners.

After entering the Standard in the first slot and the Dye in the second, in the center of the interface of the Chassis you will be shown all the plots that you can apply. The banner you will get will be one made up of the color of the base of the original banner, with the texture of the same color as the dye.


How to decorate banners in Minecraft 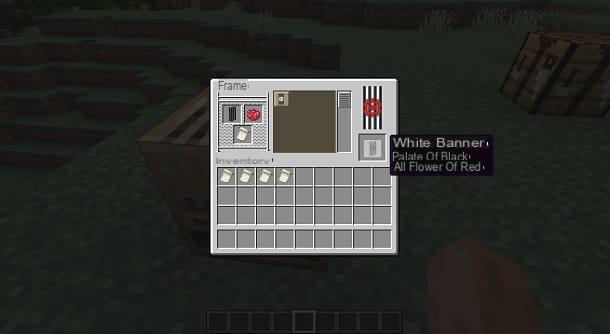 It is also possible to apply decorations depicting specific figures to the banners. The ones available in Minecraft are the following: a flower, a skull head, a creeper head, logo on Mojang it's a globe. The latter, however, is only available in Creative mode. In addition to these, for the Bedrock Edition of Minecraft, you can create the storyline of bricks or creepers.

To apply the figures I told you about in the previous paragraphs, you must be in possession of the object Figure for Banner: it is precisely a parchment that contains the design of the logo to be imprinted on the banner. This is achieved in a workbench, putting together 1 unit of Card and the object related to the figure itself.

For example, if you want to create a Figure for Banner with a Flower, what you need to do is to merge the card to 1 unit of Daisy. If you want to create the logo on Mojanginstead, you'll need to get one Enchanted Golden Apple. Instead, you can get the figures depicting the tests by defeating the corresponding creatures.

When you are in possession of the Figure for Banner, open the interface of the Chassis and place it in the slot dedicated to it, adding the Standard and Dye. You don't have to do anything else: in the slot on the right you can collect the new banner with the figure applied.

I warn you that in Minecraft real banners can be created completely decorated with elements not directly present in the video game. This operation is possible by processing the banner several times with different textures and colors until the desired effect is obtained.

If you want to get an idea of ​​some projects created by other users that could inspire your creativity, I suggest you visit the appropriate gallery on Minecraft.tools, in which you will find all the step-by-step procedures to create the pattern depicted.

How to make banners in Minecraft

add a comment from How to make banners in Minecraft