How to make the pickaxe in Minecraft

How to make the wooden pickaxe in Minecraft 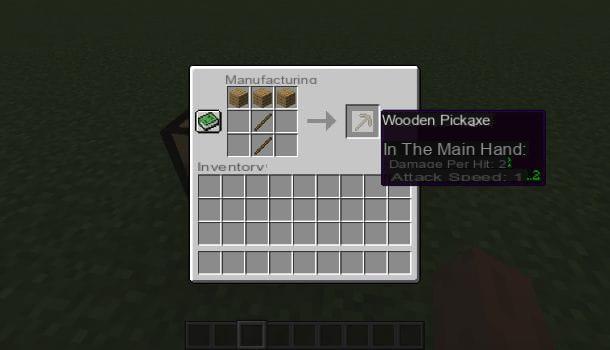 Although pickaxes, in general, can be found in trunks around the world of Minecraft, in case you want to make one you will need to use a workbench, inserting the necessary resources.

The common material for making any pickaxe is wood, to be exact i Sticks, which is obtained by processing 2 units of Wooden Planks. The other resource to use in making a pickaxe, on the other hand, depends on the type of pickaxe to be produced.

In this chapter I will explain how to make a wooden pickaxe, in the next I will show you how to make those in other materials, which will be indispensable in case you want to collect some specific resources.

So with regards to the wooden pickaxe, the resource you need to get are the Wooden boards. In case you have any doubts about how to get them, all you have to do is interact on a tree, in order to get the Logs of wood. Next, you will need to insert these into a bank gives lavoro or in the slot Manufacturing of the inventory and you will get the Wooden boards.

Once you have all the listed resources, place, on a workbench, 2 units of Batons e 3 units of Wooden Planks and you will get a Wooden pickaxe. It was simple, am I right?


As for the use of this tool, know that this can be used to collect most of the resources of the world of Minecraft, but with a slower extraction speed than the picks of higher material.

The resources that you will not be able to collect with a wooden pickaxe are: i Ancient Debris,Obsidian, the Diamonds, the Emeralds,Gold, the Lapis Lazuli, Iron and Redstone.

How to make a stone pickaxe in Minecraft 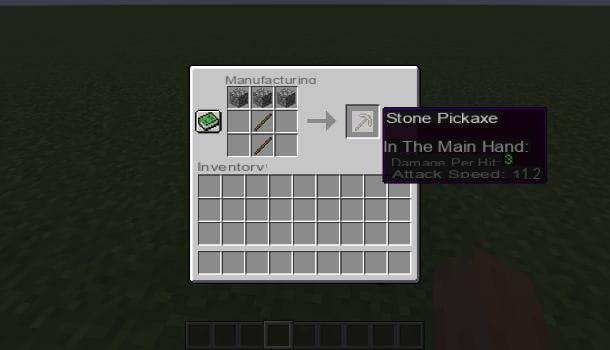 Among the best pickaxes you can build in Minecraft in the early game is the stone one. This is because the Stone pickaxe collects iron - an important resource behind many designs, including more reliable weapons and armor than wooden ones.

In order to be able to craft a stone pickaxe, you will need some important resources: first you need to procure the Sticks, which you can get from 2 units of Wooden Planks placed on a workbench. Next, you will need to get hold of blocks of Crushed stone. This last resource can be obtained easily by interacting with a wooden pickaxe on the stone blocks that you find in the underground world of Minecraft.

When you have all the necessary resources, put, on a workbench, 2 units of Staff e 3 units of Crushed Stone, to successfully manufacture a Stone pickaxe. The newly created tool is slightly more efficient than a wooden pickaxe and will allow you to pick up the Iron, a resource that was foreclosed on with the previous tool.

Among the resources that, however, you will not be able to collect yet, I would like to point out: i Ancient Debris,Obsidian, the Diamonds, the Emeralds,Gold and Redstone. The other resources present in the world of Minecraft, on the other hand, you can collect them faster, as the extraction times are reduced on average by about 50% compared to the wooden pickaxe.

How to make iron pickaxe in Minecraft 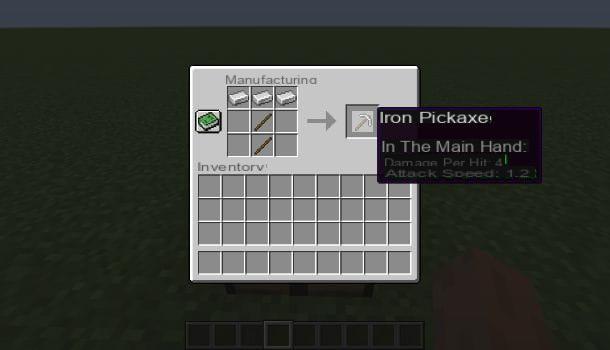 The best compromise to choose between picks is the one made with iron. A Iron pickaxe, in fact, it allows you to access the collection of almost all the resources on Minecraft.

To make an iron pickaxe, what you need to do is get yourself gods Sticks, which you can easily get from Wooden boards in a workbench, and come on Iron ingots. As I told you in the previous chapter, thanks to the stone pickaxe you can collect the Raw iron.

By manufacturing one furnace, which I told you about in detail in this guide of mine, you can merge the Raw iron, in order to obtain gods Iron ingots. When you've got the latter, all you have to do is insert them into a workbench 2 units of Batons e 3 unit of Iron Bar, to get a Iron pickaxe.

As I indicated in the introduction of this chapter, the iron pick is a very good compress compared to the picks previously described and also compared to those I will tell you about in the following chapters. This is because iron is an easily available resource in the world of Minecraft and, thanks to an iron pickaxe, you can easily (and quickly) collect most of the resources found along your adventures.

The main problem is that some materials, such as i Ancient Debris and l 'Obsidianhowever, they cannot be collected. For example, theObsidian it's important to be able to craft a portal to the Nether and thus access other Minecraft content that will otherwise be closed to you. THE Ancient Debrisinstead, they are essential for crafting the best equipment currently available in Minecraft. To get these possibilities you will need to build more advanced pickaxes, like the ones I'm about to tell you about.

How to make a diamond pickaxe in Minecraft 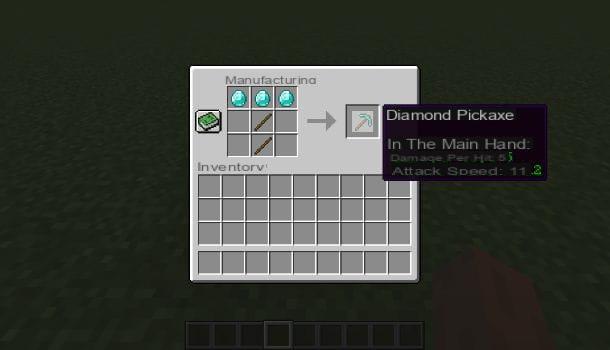 If you don't want to have any limitations on the resources you can collect in Minecraft, then you need to bring a Diamond pickaxe. This tool is among the best you can take with you, even in terms of ease of construction.

In fact, you should know that unlike all the other lower quality pickaxes I told you about in previous chapters, diamonds are a resource that takes just a little time to find, but it will certainly be easier for you to make a pickaxe than diamond instead of one in netherite (currently the best in Minecraft on all aspects).

Diamonds are a resource that you can find underground in Minecraft, reaching a considerable level of depth. In any case, in case you want to know more about how to get diamonds, I recommend reading this guide of mine.

To manufacture a Diamond pickaxe, what you have to do is place, in a workbench, 2 units of Staff e 3 units of Diamonds And that's it! It was simpler than you thought, am I right?

How to make a netherite pickaxe in Minecraft 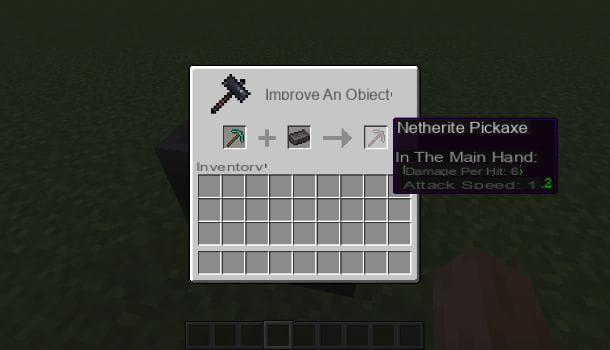 The best pickaxe you can make in Minecraft is the one made from Netherite. This is a resource that you do not find in the Overworld, which is the default world of Minecraft, but in the Nether.

Un Netherite Pickaxe it is efficient in every respect, both in terms of extraction speed, both for the possibility of collecting any resource, and finally for its durability. If you managed to access the Nether, thanks to the advice I gave you in this guide, let's see together how to find Netherite.

First of all, you must know that this resource cannot be obtained directly from a block, but it is necessary to work it with others. First, you need to look for blocks of Ancient debris underground in the Nether. I warn you that it is not an easy undertaking, as they are a very rare resource. When you have found a vein of Ancient debris, use a diamond pickaxe to obtain the corresponding resource.

Well: we're almost there! The next step is to fabricate a Forging bench, using 4 units of Wooden Planks e 2 units of Iron Ingots. After interacting with this tool, place a Diamond pickaxe e 1 unit of Netherite Bar, to get a Netherite Pickaxe.

How to make a gold pickaxe in Minecraft 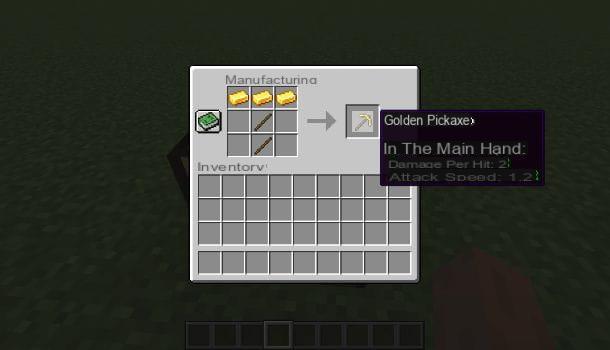 A special mention goes to golden pickaxe, which is one of the worst variants of this tool and generally considered a waste of materials. Although the golden pickaxe is the fastest in terms of resource extraction, compared to all the other variants I told you about in previous chapters, it turns out to be only an improved version of the wooden pickaxe.

In fact, the golden pickaxe has all the characteristics of the wooden one, with the only difference being that it is the fastest to extract resources. It must also be considered that the raw material of which it is made, i Gold bars, are not readily available and, therefore, it is also not immediate to manufacture.

In any case, if you managed to find gods Blocks of Gold in ocean ruins or you have obtained Gold nuggets by Zombified Piglins or by melting equipment made of gold in a furnace, all you have to do is place 9 units of Gold Nuggets in a workbench to get 1 unit of Gold Bar.

Once this is done, always on a workbench, insert 3 unit of Gold Bar e 2 units of Staff, to manufacture a Golden pickaxe.

How to fix a pickaxe in Minecraft 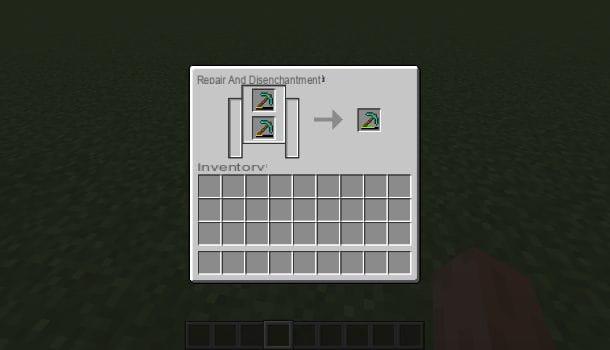 To conclude, I'll explain how you will have to manage the durability of a pickaxe on Minecraft. Whenever you use a pickaxe of any material, its durability will drop. Obviously, the better the quality of the pick, the greater its resistance to wear.

In Minecraft, the weakest pickaxe is precisely the one made of gold, which I told you about in the previous chapter, while the absolute best is the one in Netherite. A pickaxe's durability drops each time you use it on a block for resources or when attacking hostile creatures.

To repair a pickaxe, what you need to do is place it in a workbench or Grindstone two damaged pickaxes of the same material. The amount of total durability will be made up of the sum of the remaining amount of both, increased by 5%.

How to make the pickaxe in Minecraft

add a comment of How to make the pickaxe in Minecraft