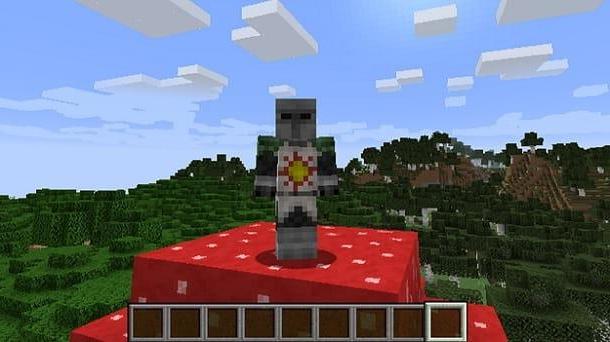 Before going into the details of the procedure on how to change skins on minecraft, I think it might interest you to know more about this possibility.

In fact, you must know that skins are nothing but gods costumes for your character. If you are a fan of the Mojang title, you will surely be aware that the default skins are those of Steve e Alex: the game's default male and female “costume” respectively.

In any case, use a customized aesthetic element allows users to express their creativity and make their character unique within the game world. In short, a skin is able to provide that sense of identification typical of online video games, which otherwise would be missing from the famous Mojang title.

Among other things, as you can easily imagine, given the enormous popularity achieved by Minecraft over the years, fans have made available to other users a boundless number of free downloadable skins, including many relating to particularly well-known narrative universes. And I'm not just talking about unofficial content.

When we talk about custom costumes in Minecraft, we generally refer to the multiple creations made by the community; however, it is good to know that there are actually gods as well skin packs made directly by developers of the game and which can be equally interesting. 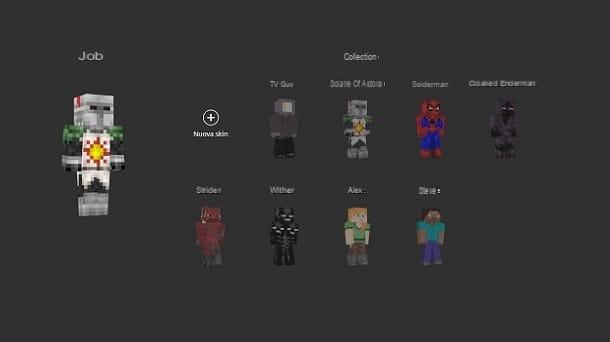 In any case, a subdivision must be made by platforms. In fact, the method for finding these costumes varies depending on the system on which you usually play Minecraft.


More precisely, the Java Edition of Minecraft for PC allows you to install quietly content created by the community. In this regard, the site that I recommend you to consider is the one called MinecraftSkins, particularly appreciated by Minecraft fans.

To download a skin from the latter, simply reach the page dedicated to the appropriate one Costumes and press the button Download: nothing more, nothing less. By doing so, you get the .PNG file of the costume, which is all you need to apply it.

as to Bedrock version of Minecraft, available for Windows 10, mobile devices and consoles, you should know that the latter is more limited but, at the same time, also more subject to the "attention" of cybercriminals: which is why it is good to focus only on internal digital shop to the game by letting go of unofficial customization solutions.

In fact, there are some bad guys who over the years have "targeted" the Bedrock edition of Minecraft, especially its variant related to smartphones and tablets, through malicious applications dedicated to skins and other customizations (known by the term fleeceware) able to steal money from users without them noticing.

Now that you know the general situation relating to the world of Minecraft skins, I would say that it is time to pass concretely to the procedures that allow you to apply them, both on the Java Edition and on the Bedrock Edition of the title. Below you can find all the relevant information.

How to change skins on Minecraft Java Edition 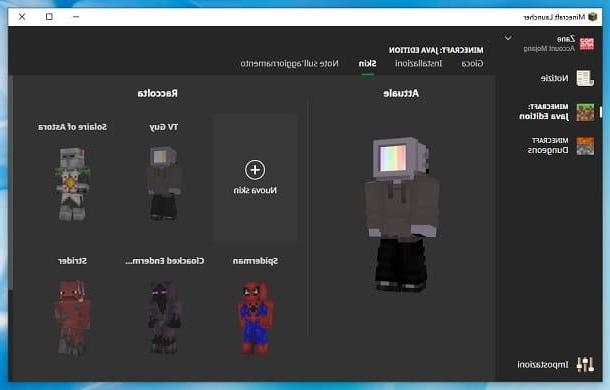 If you are wondering how to change skins on Minecraft Launcher, this is the part of the tutorial for you. In fact, as regards theJava edition of Minecraft for PC, you have to go through the launcher used every time you start the game.

To proceed, simply open the Minecraft launcher and click on the tab first Skin, present at the top, and later on the box New Skin. At this point, you just have to type the costume name, select the player model (if Slim or Classic) and click the button Shop by Department, in order to select the PNG file of the skin (which I explained to you how to download in the previous chapter).

Once you have finished all the necessary changes, just press the button Save and use for, correctly apply the skin you have chosen to use. From the menu Skin you can then eventually switch from one costume to another, obviously choosing from those installed.

Finally, the last thing you need to do is to simply enter one Partita any. By doing so, you will see the skin already applied to your Minecraft character. If you want to see the whole thing better, that is in third person, I remind you which keyboard button to use is F5. 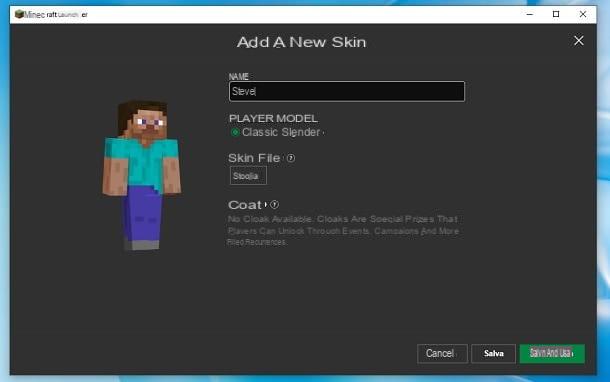 For the rest, since you are interested in this topic, I would recommend that you take a look at my tutorial on the best Minecraft skins. In fact, in the latter I have made many practical examples that could be useful for your gaming sessions.

Two other guides that could be interesting to deepen this world are those related to how to create a skin on Minecraft and how to have the cape on Minecraft. These are in fact tutorials that can help you further express your creativity with these costumes.

How to change skins on Minecraft PS4 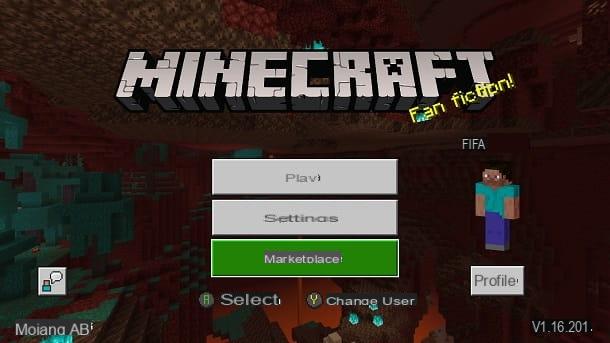 Minecraft is also played a lot through his Bedrock version, available for Windows 10, mobile devices and consoles. You may therefore want to learn how to change skins from these platforms.

To give you a practical example, in this part of the guide I will use the version for PlayStation 4 of the game, but in reality the indications are essentially the same for the other platforms, as the Bedrock version of the game is designed to standardize the game mechanics on all devices.

As mentioned before, my advice is to simply go for the internal digital shop to the game. In fact, for the security reasons mentioned in the preliminary chapter, I will not deal with third-party sources from which it is possible to find skins.

In any case, once Minecraft is launched, you just need to open the Marketplace, in order to access the in-game shop. Here you will notice the presence of various options, including that Skin packs. By pressing on this last button, you will enter the section dedicated to costumes.

The Mojang title store makes available to the user myriads of packages, either paid and free. In the first case we go through the monete, which is the virtual currency of the Minecraft store. The latter can be purchased through the classic platform payment system you are playing on. In the case of PS4, I recommend that you refer to my guide on how to pay on the PlayStation Store. 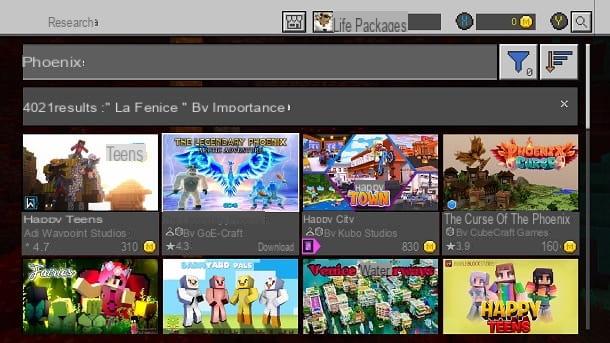 I coin prices they vary according to the promotional period. In any case, costs usually start at 2,29 euros for 320 coins and come up to 49,99 euros for 8.000 coins. A "basic" skin pack usually costs money 310 coins, so the package from 2,29 € should be enough for you to get some costumes.

For the rest, obviously the Marketplace of the Bedrock version of Minecraft also offers free skin. In this case, the possibilities of choice are more limited, but in reality there are some intriguing solutions also from this point of view.

To give you concrete examples, I suggest you take a look at the packages named Skin bonus mythology norrena, Blockheads e Great Christmas skin, which you can find through the appropriate search bar. In this regard, I remind you that you can also use the filters, for example by setting the one relative to Minecoin su Free, so you can find all the free content.

To apply a skin, just enter the relevant page, press the button Free and select the option Equip the skin. This way, your character will “dress up” with the chosen costume.

If, on the other hand, you want to better manage this possibility, I recommend that you go back to Minecraft start menu, press the key Profile and take a look at the skins you already have installed. You can also press the button CHANGE CHARACTER to make changes related to other items of clothing, for example headgear e mantle.

Just pay attention to the fact that, even here, there are gods paid items, as well as those free. In any case, Mojang's title will warn you about what type of content it is, since there are special icons.

Summing up, the Bedrock version of Minecraft in the end is able to offer several interesting skins even without going through third-party services, which could create some "headaches" in terms of account security.

For the rest, if you are interested in learning more about the other elements made available by the internal Marketplace of the Mojang title, you might consider consulting my tutorial on how to install mods on Minecraft Bedrock.

Also, since you are used to playing this popular sandbox video game, I would like to advise you to “drop by” on the page of my site dedicated to Minecraft, where you can find a good number of guides dedicated to the title owned by Microsoft.

add a comment of How to change skins in Minecraft