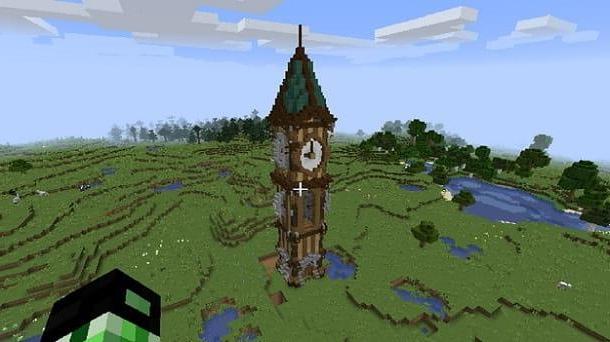 Before going into the details of the procedure on how to build a tower in minecraft, I think it might interest you to know more about this possibility.

In fact, if you want to build a tower to be contextualized within your village in the Survival mode, you may find a quick one useful list of necessary items to build this structure, since you will then have to find them. I remind you, however, that by playing in Creative mode, all the elements are already available in the inventory.

In any case, in this tutorial I will be making different towers between them, in order to offer you more "design" and also guarantee you the possibility of choosing the structure that you consider most valid. Starting from the medieval tower, the materials needed are: fir logs, diorite, oak planks, fir plates, acacia boards, pietrisk e blocks of red mushrooms.

To illustrate the procedure, I'll use the Java version for PC di Minecraft. However, you shouldn't have too much trouble making the structure from Bedrock version of the game for Windows 10, mobile devices and consoles, as at most they slightly change the names of some elements.

In the case of the clock tower, in this tutorial I will use one structure already built for the Java version for PC of the game. You will therefore be able to transport the tower directly into your game, while if you have the Bedrock version you can take a look at one 3D visualization and take inspiration for your creation.


In short, I am sure that you will find bread for your teeth and that, in the end, you will be able to create a structure that is well contextualized within your Minecraft world.

How to build a medieval tower in Minecraft 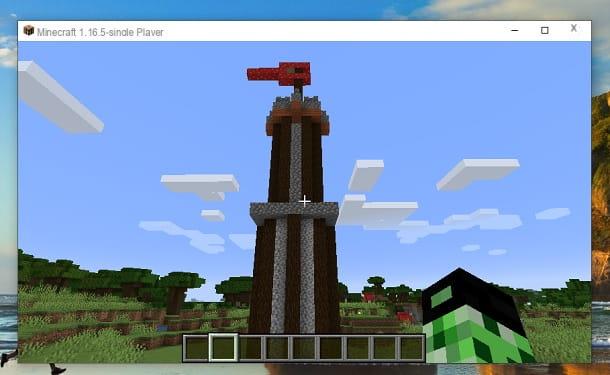 After explaining the general situation to you, I'd say it's time to take action and build one medieval structure within Minecraft. If you are wondering how to make an observation tower in minecraft, this is the part of the guide for you.

In fact, I am going to explain to you how to make a tower to be placed on the edge of your village, or perhaps your own castle, to "keep an eye" on what is happening in the surroundings. Furthermore, the design is medieval, so it can figure well in various contexts. 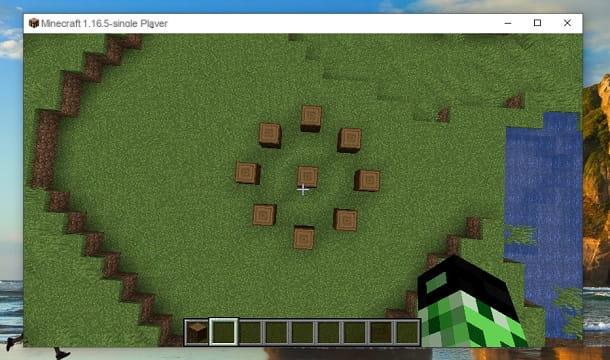 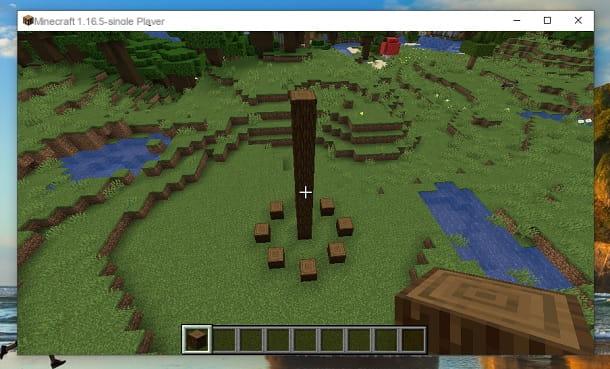 Then, starting with the block you placed in the center, create one tall column 10 fir logs. 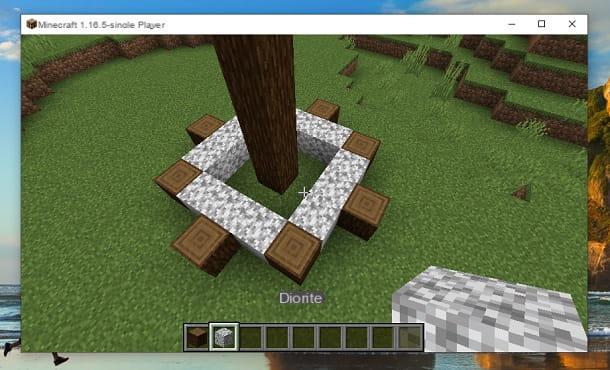 At this point, place at the bottom, creating a sort of "frame", gods diorite blocks. 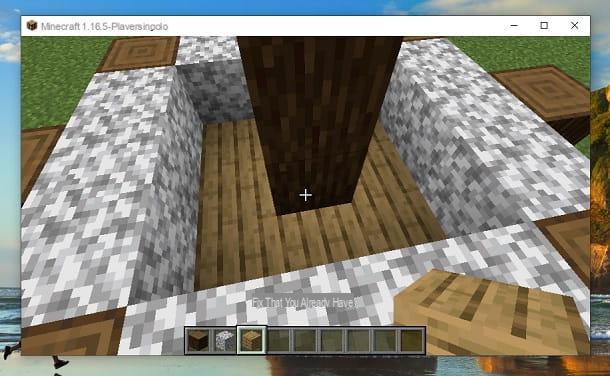 Break, therefore, the blocks of the ground inside the structure e create a floor, through gods oak plank blocks. 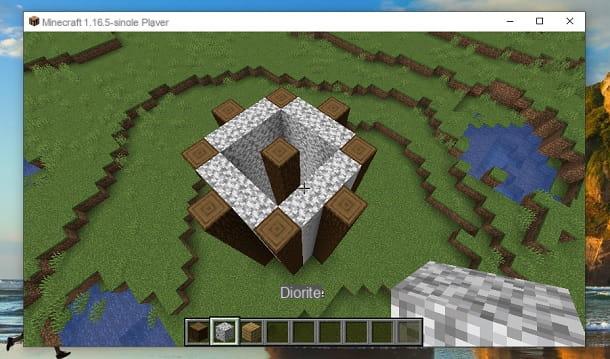 Subsequently, extend all blocks, both fir and diorite, which you placed previously, reaching theheight of 10 blocks of the central column, which you need as an "indicator". 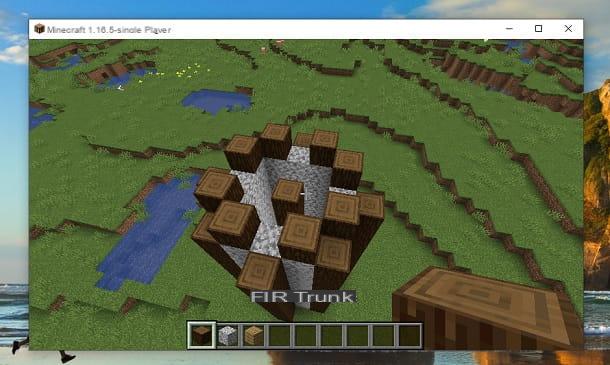 Now, place gods blocks of fir trunks, in an "alternating" way than the ones you placed previously. 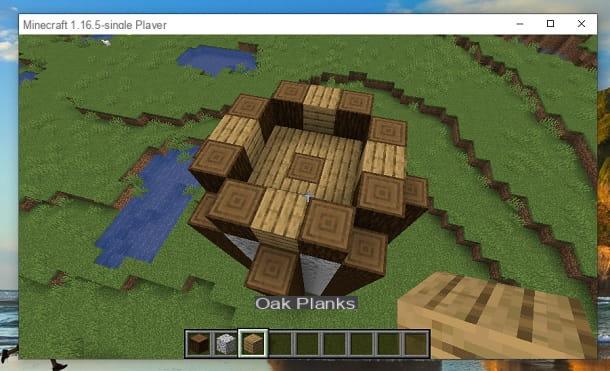 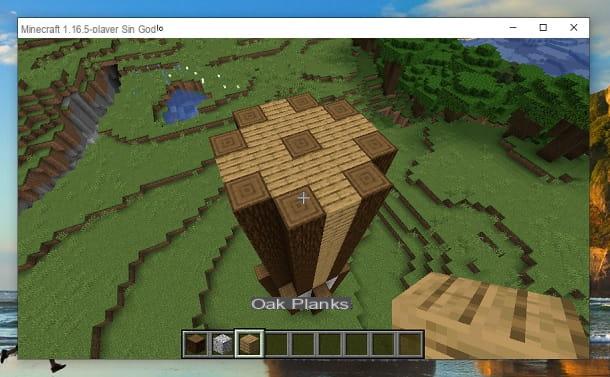 At this point, extend all blocks you just placed, even those in the center, of 10 units upwards. 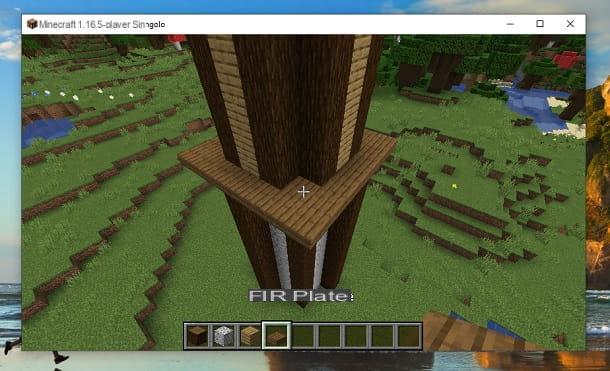 After that, go back to the "middle floor" and use some fir plates, starting from the upper block to those left "uncovered" on the sides, for surround the structure. 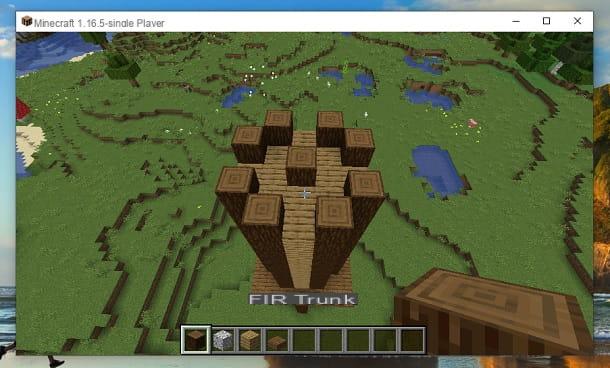 Subsequently, extend all fir log blocks one unit up. 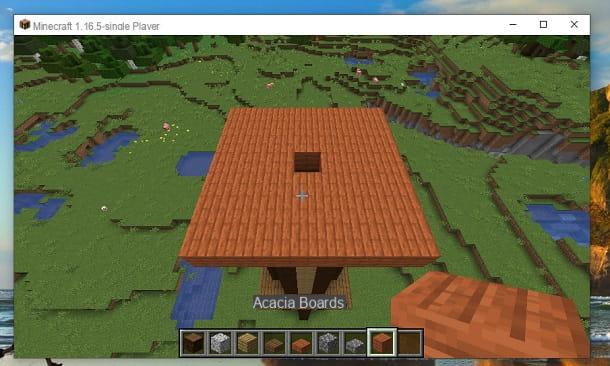 Take, therefore, gods acacia plank blocks and creates a sort of "roof", protruding one unit from the structure and leaving the block in the center free. 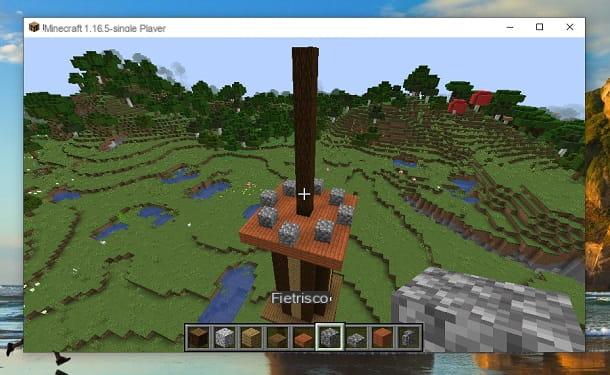 At this point, extend upwards by 10 units il central block of fir logs. It also surrounds the structure of crushed stone blocks, however, positioning them as you did at the beginning. 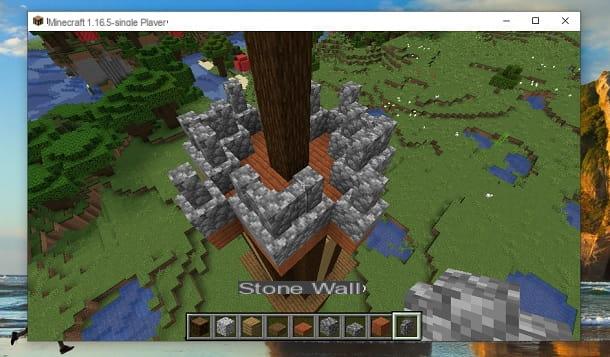 Complete, therefore, the circle" and place on top of each block a stone wall. After that, break the blocks of acacia planks that go “outside”. 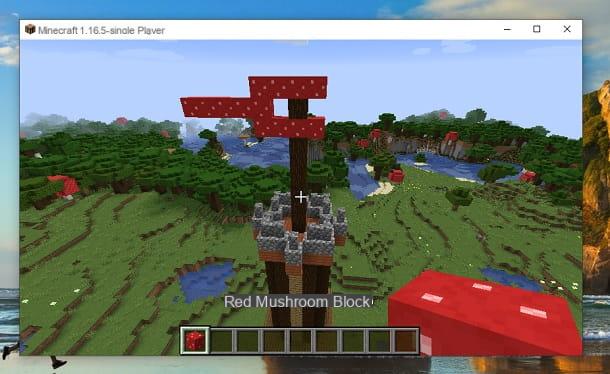 Now, you just have to create a sort of "flag" up. You can do this by means of gods blocks of red mushrooms.

Finally, to give a more medieval touch to the structure, you may think of replace le fir plates of the intermediate floor and the oak planks present at the top with del pietrisk.

Perfect, now yours medieval observation tower it's over. It is a structure that has the right height for show you the enemies present in the surroundings. Clearly what I have explained to you how to do it is only a base tower, which can then be extended and customized in many other ways.

For example, you might think about creating internal stairs to reach the "roof" as well as some mura around the structure. Also, in case the design is not totally to your liking, I remind you that you can always customize it at will.

In any case, since it is an observation tower, the important thing is that it fulfills its duty: I can assure you that using this structure, perhaps placing itself with an arch at the top, can guarantee excellent satisfaction.

How to build a clock tower in Minecraft 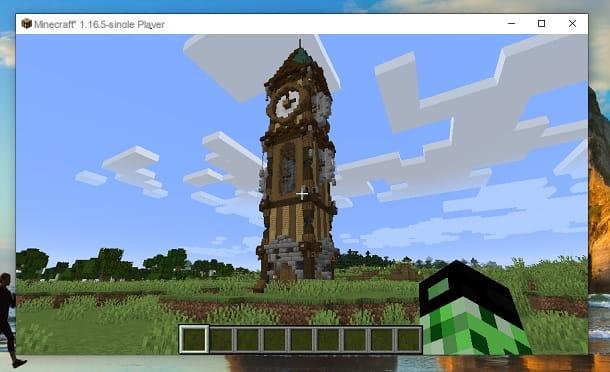 How do you say? You have the Java version of Minecraft per PC and would like to make one in a short time clock tower? In this case, I can only advise you to download a ready-made structure particularly interesting made by the community, that is Steampunk Clock tower by HueZux, compatible with versions 1.14, 1.15 e 1.16 of the game.

Given the complexity of the structure (think that the building took over 10 hours to build by the user who built it), the advice is to first take a look at this intriguing creation of the community, which among the more allows you to understand how a clock tower can be made in Minecraft.

Generally I don't often suggest this approach, as I prefer to make original structures like the tower from the previous chapter. However, as you may have noticed, these are complex buildings to be built well and, therefore, the final result may not always be optimal based solely on your own creativity.

You can therefore take a look at what other users have done stimulate you and then allow you to build your tower properly (obviously not by copying, but perhaps taking a cue from certain particularly brilliant ideas). In addition, the clock tower made by HueZux is splendid and allows you to understand what incredible structures you can create within the Mojang title, if you try your best.

In any case, to download the ready-made structure, just connect to the PlanetMinecraft website and press the blue button DOWNLOAD SCHEMATIC. By doing so, you will get a file .schem relative to the tower. It is a file schematic, that is a type of file that can contain various elements of Minecraft created by the community (for example the structures to be imported into the game) and which is compatible with the Java edition for PC of the Mojang title.

If, on the other hand, you use the Bedrock version of the game, you might think about pressing the button first 3D VIEW e poi quello Play to take a look at one 3D representation of the structure e get ideas.

Now you are probably wondering how to install schematics on minecraft. Well, you must know that it is necessary to go through the mod WorldEdit. You can download the latter from the appropriate page of the CurseForge portal, simply by pressing the button Download: just be careful to choose one compatible version with the structure and with the game installed on your PC. In case you do not meet the requirements, I remind you that you can refer to my tutorial on how to change the version of Minecraft.

In any case, this way you will get the file worldedit-mod- [version] .jar. In order to install the latter, I remind you that first you need to configure the appropriate one profile forge. If you have already used mods in the past you already know everything, but if not you can find all the relevant information in my guide on how to install Minecraft Forge.

For the rest, the JAR file of mod va moved / copied, its Windows, in the path C: Users [username] AppDataRoaming.minecraftmods, while su MacOS you need to go to ~ / Library / Application Support / minecraft / mods. For completeness of information, you should know that, to reach the path relative to Windows, you may have to follow my tutorial on how to view hidden folders.

At this point, start the Minecraft launcherselect il profile forge from the box at the bottom left and press the button PLAYS. If everything has been done correctly, by pressing the button Courage, located in the game's main menu, you should see the entry for Worldedit. 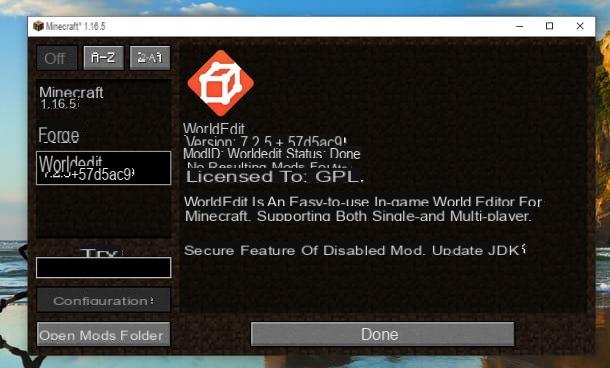 Perfect, now you can close the game. In fact, all the necessary folders have been created for install the schematic. To do this, go to the path C: Users [username] AppDataRoaming.minecraftconfigworldedit on Windows o ~/Library/Application Support/minecraft/config/worldedit su MacOS.

At this point, create a folder inside this path and name it Schematics. Move / Copy therefore within the latter the file .schem obtained previously. For ease of use, I strongly recommend that you rename it to Torre.schem. Perfect, now you just have to start the Minecraft launcher, check that the correct one is already set profile forge e premere sul pulsating PLAYS. 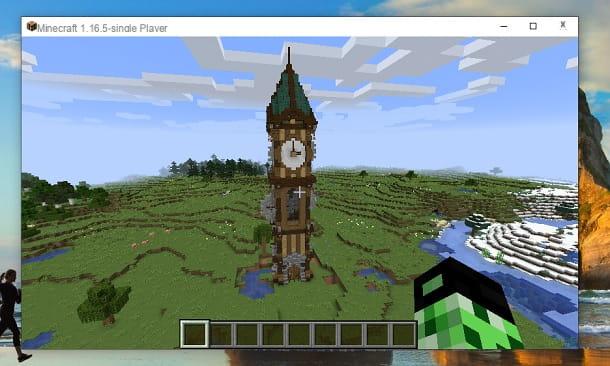 Perfect, now in front of your character will appear the clock tower. You can already use it this way within your world or, as I suggested earlier, you can take a close look at it for understand how it was made and potentially take a cue. 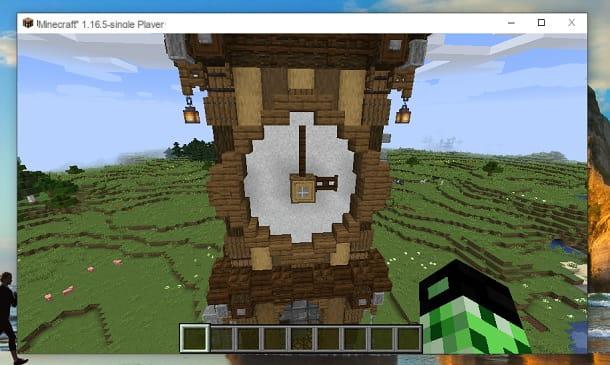 I mean, now you have the clock tower and you know too how to put schematics on minecraft.

For the rest, since you are a fan of the Mojang title, I would advise you to take a look at the page of my site dedicated to Minecraft, where you can find many other tutorials that could be for you.

add a comment of How to build a tower in Minecraft