How to make an elevator in Minecraft

An easy way to create an elevator in minecraft is to use a system that takes advantage of i sticky pistons and slime blocks. Building an elevator of this type does not take much time, as its construction procedure requires only a few steps to pay attention to.

The first thing to do is to get the materials to create the elevator. We need some wooden boards, obsidian blocks, slime blocks, an normal piston, three pistons stickyand redstone, a pair of buttons and two observer blocks. What are all these materials for? I'll explain it to you briefly.

The slime blocks have the characteristic of being composed of a material (the slime) that is bouncy and sticky. It therefore allows you to drag all the other adjacent blocks with you. A plunger placed under a block of slime allows you to push the block and all the blocks on which the slime interacts. A piston, however, only makes one click, which however can be "infinite", if connected to an observer block. The latter has the purpose of emitting a signal to the piston if there is a change of state to any block on which the observer is resting.

Now that you have a conceptual understanding of the operation process of this elevator, it's time to start building it. First, you have to dig one hole 3 × 5 in size and four blocks deep. The side of three blocks must face the elevator entrance. The pit is essential to contain the lift mechanism. 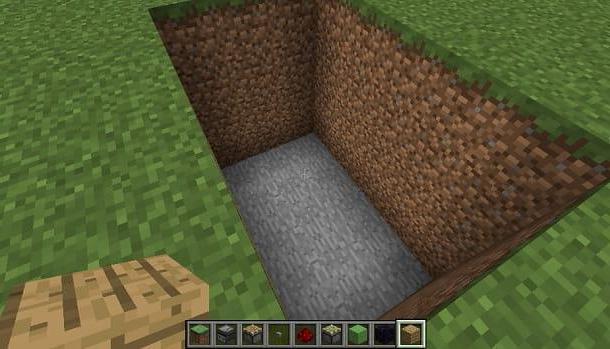 Now go inside the hole and place a appiccicoso piston on the wall of three blocks. This plunger should be positioned horizontally with the sticky surface facing the hole, on which you will need to place a block of axes. It then leaves a block of free space to place a obsidian block. 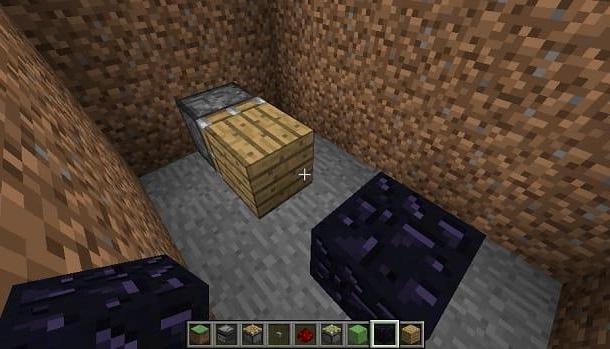 On the obsidian block, place two vertically slime blocks. Next to the first block of slime, place a observer block with the redstone output facing up. On the latter, place a appiccicoso piston with two above slime blocks. 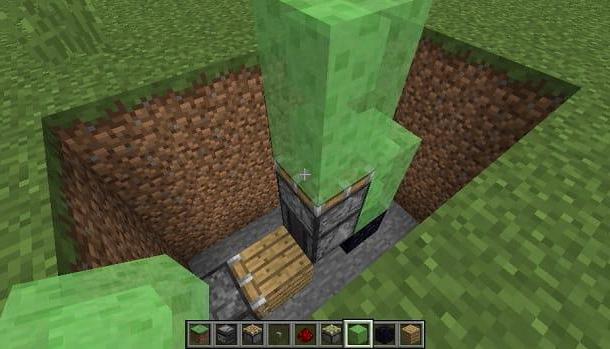 Next to the last block of slime you placed, place a observer with the redstone output facing down. Between the observer and the slime block, place a appiccicoso piston also facing down. Now, place two more slime blocks on the others of the same material that you previously placed. 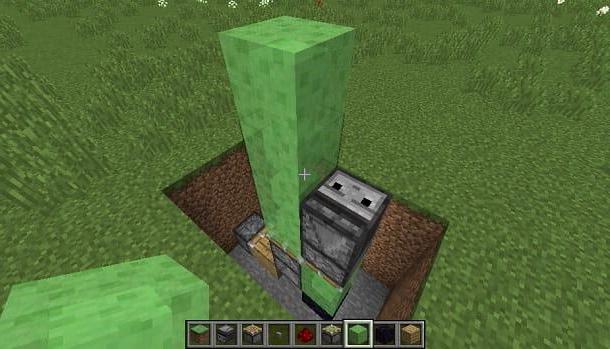 On the first sticky plunger, which you initially placed horizontally, place a block of axes with above the redstone. Install on top of another block of axes with button. On the column of four slime blocks, place on side two blocks of axes at the ends, so as to create the lifting platform. 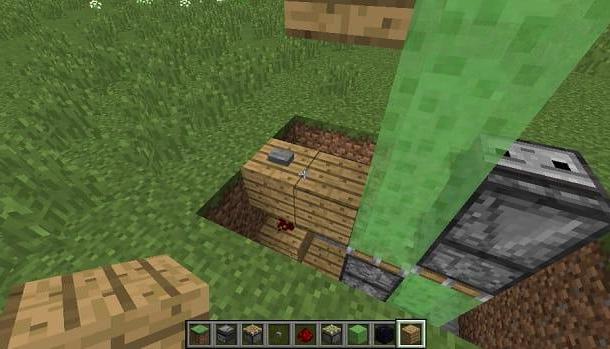 At this point, it's time to build the structure that will allow you to accommodate the elevator and bring it back to the lower floor. If you are building an elevator inside the shelter, the structure is certainly already present, as you will simply have to make an opening in the floor of the upper floor. In my case, the elevator is useful for accessing a shelter suspended in the air. 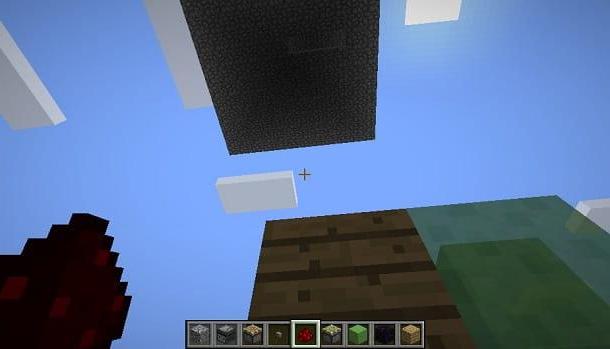 Upstairs, build a arc with planks, three blocks high. Then place a block of axes with button on the front and one of obsidian and wood in the rear one. On top of the arch, place a strip of redstone. Finally, under the block of axles in the rear area place a pistone normal flipped down. 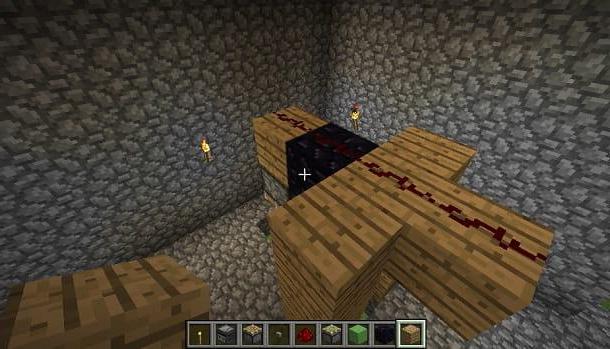 Now all you have to do is go back downstairs, step onto the lift platform and press the button to operate it, to take you upstairs. To go down, just press the switch you placed on the top block on the upper floor.

If you have any doubts, I suggest you watch this video tutorial (in English) made by a YouTuber, which explains in detail how to proceed with the construction of this lift.


Mod to create an elevator 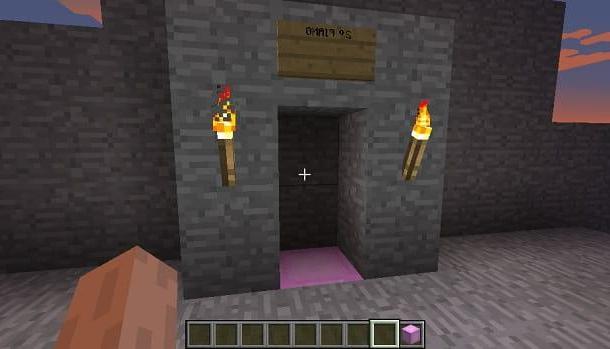 Another method to use the elevator on Minecraft, without having to follow complicated procedures and tricks, is to install a against used for this purpose: OpenBlocks Elevator. This mod is downloadable from the website of Curseforge, in the section dedicated to Minecraft.

The mechanism of this mod is simple: two special blocks are placed on different planes, but which are however on the same vertical axis, i.e. aligned. The player has to do is place his avatar on this special block and press the space bar on the keyboard to perform a jump, so that a teleport is performed on the corresponding block on the upper floor.

Instead, to go down to the block located on the lower floor, the player must press the button Shift on the one positioned on the upper floor, so as to be teleported.

If you are interested in this mod, reach the link I provided and press the button Download to download the latest version available. However, I recommend that you download via the card Fillet, so as to take the version of the mod compatible with the one you play on Minecraft.

Other than that, you need it Minecraft forge, to manage mods on Minecraft. Go to the official website of the program and choose the version of Minecraft you are playing. Now, tap on the item Windows Installer to perform the download, at the end of which you will have to double click on the end you just downloaded. In the window that appears, click on OK to install Minecraft Forge.

At this point, go to the folder C: Users [name] AppDataRoaming.minecraft means File Explorer Windows and place the file JAR di OpenBlocks Elevator in the folder mods. If it doesn't exist, create it manually.

Start the Minecraft launcher and press the icon with the symbol (▲) located next to the button Play. Then select the profile Forge e pigia his Play. In the main Minecraft menu, click the button Courage, to view the list of installed mods and check if it is present OpenBlocks Elevator.

At this point, start a new game or join an already started one to use this mod. In creative modeby pressing the key E on the keyboard and by clicking on the icon with the symbol (▶), you can access the tab Elevator Mod. 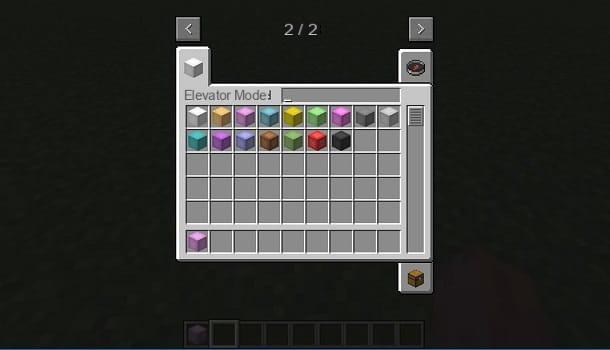 You will find a number of colored blocks that can be used to quickly move around them. You can only move the avatar to blocks of the same color.

In mode survival, instead, through a bank gives lavoro, you can create the colored blocks. You need eight unit of wool of the same color and one Pearl of Ender. Then place the Pearl of Ender in the center of the squares on the workbench and then places the eight o'clock around it unit of wool. 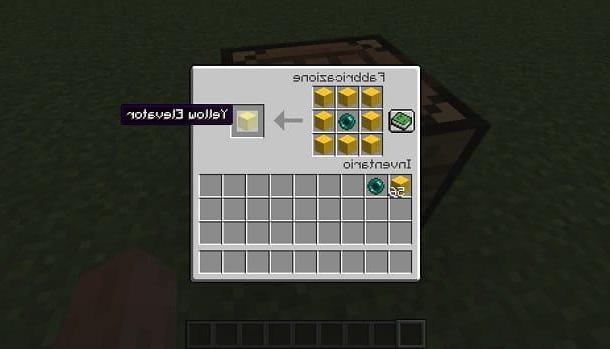 By doing this, you will have created a colored elevator block. Repeat the procedure to create the second block for the elevator's destination.


Other ways to create elevators in Minecraft 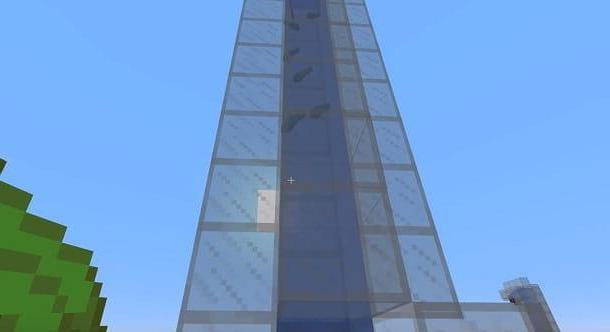 Minecraft is a game where creativity has no limits. For this reason, there are dozens, perhaps hundreds, of different ways to make an elevator. Not being able to propose them all in this guide of mine, I invite you to search on YouTube to access the countless video tutorials to build an elevator in Minecraft.

What you need to do is reach the YouTube website or open its official app and type, in the search bar at the top, the terms "minecraft elevator " or "minecraft elevator” (in English). You will find many videos made by fans of this wonderful game, ready to help you with their tutorials. Just to give you some examples, you can make a water lift or a piston lift.

How to make an elevator in Minecraft

add a comment from How to make an elevator in Minecraft