How to make a piston in Minecraft

How to build a piston in Minecraft 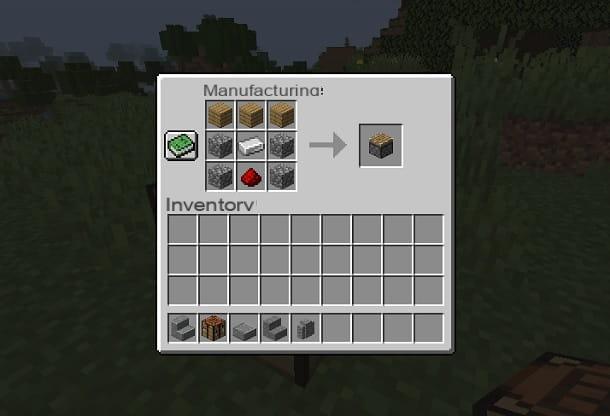 If you are wondering how to make a minecraft piston, know that the necessary materials are not expensive at all and that therefore it is an object that you can build even in the early stages of the game. Unless otherwise specified, the indications apply to both the version Java of Minecraft (available only on PC), both for that Bedrock, available on Windows 10, console and mobile devices instead.

Start by opening a bank gives lavoro, inside which to place 3 units of Wooden Planks in the top row, 1 unit of Redstone Dust in the center, 1 units of Iron Ingot in the bottom row in the middle e 4 units of Crushed Stone in the remaining spaces. By doing so, you will get a Piston.

Now that you know how to get pistons, you can get them to operate using certain objects. For example, any type of switch, such as a button or a leads, can cause a piston to activate, expanding and displacing almost any block placed in front of it. Obviously, the same rule also applies to redstone circuits.

How to make a sticky piston in Minecraft 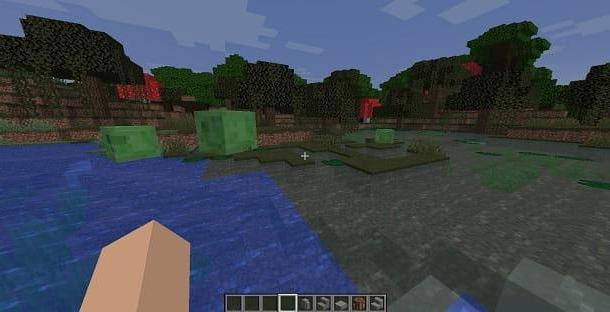 Before showing you how to make sticky piston minecraft, you need to explain how you can get the materials you need to be able to create it.


In fact, as you may have already guessed, to create a sticky piston you need to use the Slime balls obtainable, in fact, from Slime. It is usually easier to find these creatures underground, but it is also possible to encounter them in the swamp biomes.

Keep in mind that the slime spawn system is quite complicated, as they only appear in certain chunk (i.e. portions of land) and then finding them may take some time. In any case, my advice is to focus on their research in the biomes of the swamp rather than underground, as it is a much less expensive undertaking.

Alternatively, you could make use of special sites that can identify the chunks in which the slimes can spawn. Just google it “slime chunk finder” and you will find several sites that can help you find Slimes (please, always check the trustworthiness of a site, before visiting it). 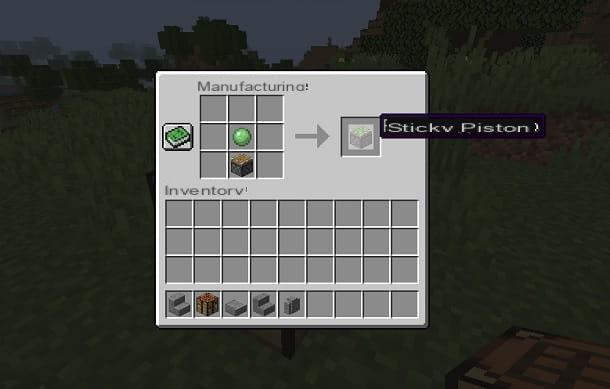 After getting some Slime balls, you are ready to make a sticky piston. To do this, you just need to open a bank gives lavoro and place a Piston (I told you how to build it in the previous chapter) and one Ball of slime: you will get a Sticky piston!

The mechanics of the sticky piston are exactly the same as that of the normal piston, as I explained to you in the previous chapter. The only difference is that almost any block that comes into contact with the extendable side of it will stick to the piston.

With this block, in fact, it is possible to create more complicated and functional mechanisms, opening up the possibilities to create various circuits, as you will see by continuing to read this guide.

How to make a piston lift in Minecraft 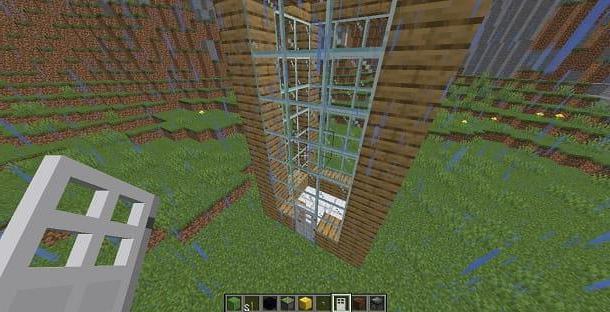 The proceedings for make a lift on minecraft they are not too complicated to follow, and in any case you don't need to limit yourself to what you can do with the basic version of the game. In fact, if you're playing Minecraft with the Java Edition, which is the exclusive version for PC, you could also think about making an elevator by downloading one against to make it easier. This option is not feasible on the version Bedrock, available for Windows 10, console and mobile devices. Read on to see both alternatives in detail!

Do a lift with the pistons 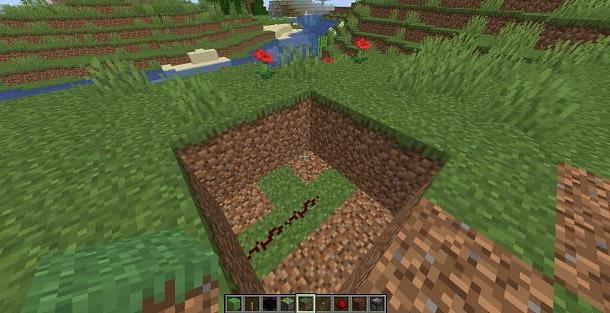 make a lift with pistons, start by digging a deep space 2 blocks compared to the base, at least 3 square blocks. The dimensions will increase according to the size of the elevator: in this case, a space of 3 square blocks is needed to build an elevator that will have a single free block in width.

At this point, square 2 units of redstone dust starting from the end adjacent to the point where you want to place the switch and moving towards the center. Then, on the opposite side to where you placed the redstone dust, dig 1 block and place a Sound block, which will serve to energize the circuit, as well as to make a sound whenever you use the elevator.

create 1 Sound Block, just open the bank gives lavoro and place 1 units of redstone dust in the center and 8 wooden units in the remaining spaces. 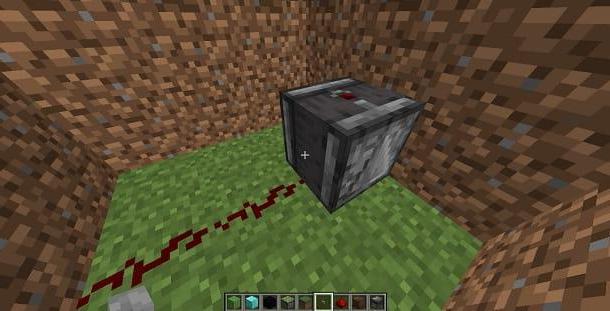 Then, just above the sound block, you need to place a Observer facing down. In order to understand if you have positioned it correctly, at the top there should be the part with the redstone.

You can create an Observer opening the bank gives lavoro and placing 6 units of Crushed Stone in the upper and lower row, 1 units of Nether Quartz right and 2 unit of Redstone Dust in the remaining spaces. 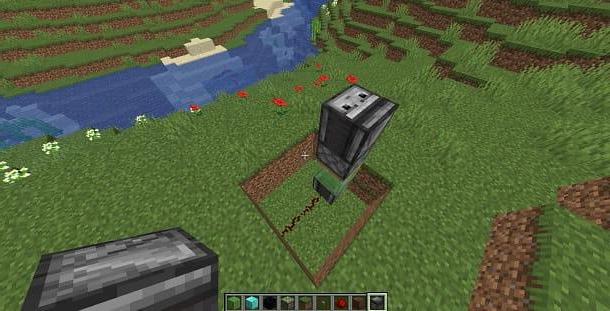 Continue building the circuit by placing a Slime block above the observer, followed by a Sticky piston facing down and another Observer facing up. 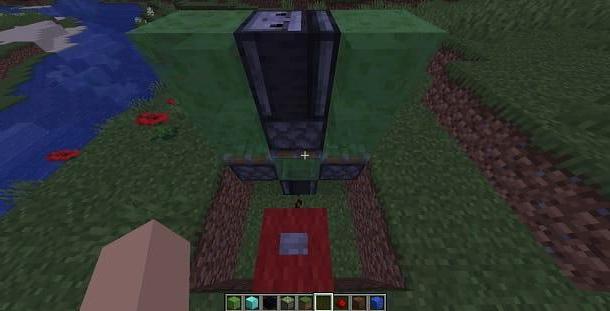 Then place 2 sticky pistons on the sides of the slime block and others 2 Blocks of slime on each piston. Finally, place a Button on the block that is above the outermost redstone dust e 1 block of your choice between the latter and the slime block. By doing so, you will have finished the lower part of the elevator. 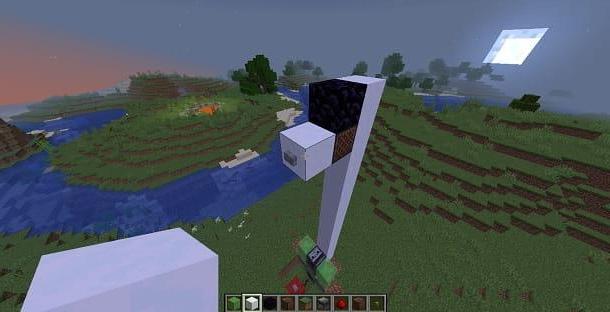 To make the top of the elevator, you have to go up a certain number of blocks at your convenience (there is no limit) and place 1 block of Obsidian that it is perfectly adjacent to the observer you positioned earlier, at the height at which you want the elevator to stop.

Continue placing 1 Sound block just below the obsidian block e 1 block of your choice towards the elevator entrance. On this, finally, square 1 Button, always facing outwards. 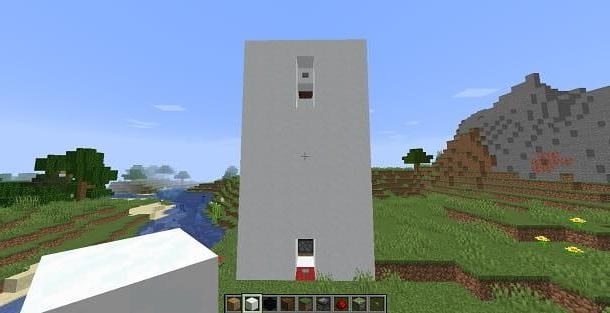 At this point the lift is practically finished and operational: all you have to do is coat the outside of the lift using the blocks of your choice. You just have to be careful not to obstruct the spaces where the mechanism passes. That's all!

Making an elevator with mods 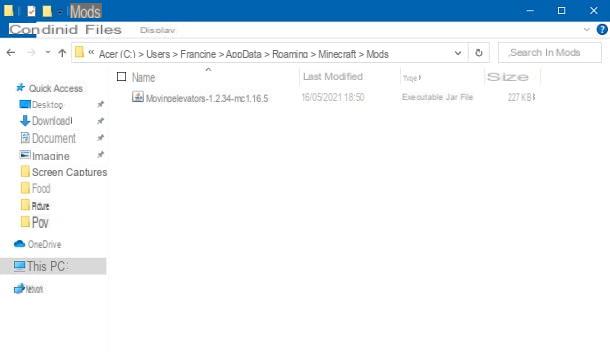 If the elevator mentioned in the previous chapter does not fully convince you, you may think of make an elevator in minecraft with mods. There are, in fact, some mods that allow the creation of a real elevator, adding new blocks and mechanics to Minecraft.

Before proceeding, I must warn you that as I mentioned earlier, mods are only available for the version Java Edition of Minecraft, available exclusively for PC.

Also, to use mods in Minecraft you need the profile Forge. In case you don't know what it is and, therefore, how to download it, I refer you to my guide where I show you how to install Minecraft Forge. I also invite you to get a version that is compatible with the mod you want to use, otherwise this may not work.

The mod I recommend you use to make an elevator in Minecraft is the Moving Elevators, which implements a mechanism that makes it possible to create authentic elevators. To download it, just visit the official page of the mod and press the button Download.

After downloading it, what you need to do is move it inside the Minecraft game folder. To open the latter on Windows, press the key combination Win + R, type % Appdata% in the box displayed on the screen and confirm, so as to open the folder roaming.

At this point, get to the folder .minecraft > mods and drag the fillet of the mod you downloaded just before.

Stai using a Mac, you can find the mod folder in ~ / Library / Application Support / minecraft / mods. In case you find it difficult to see the folders just mentioned, try turning on the display of hidden folders. 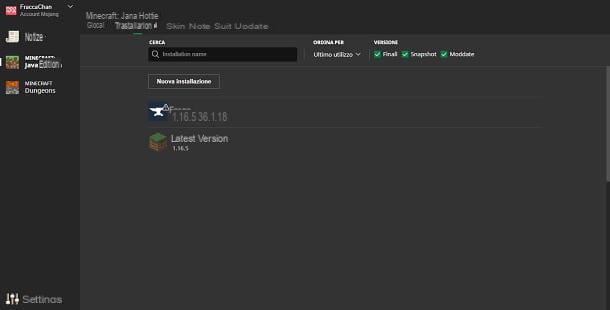 Now that the mod is ready to use, open Minecraft and press on the tab installations to set the suitable version of Forge, which you can view on the official mod page. Then press the button New installation and, in box located under the heading VERSION, select the version of Forge. Then click on the button Crea and on that Play, to start Minecraft. 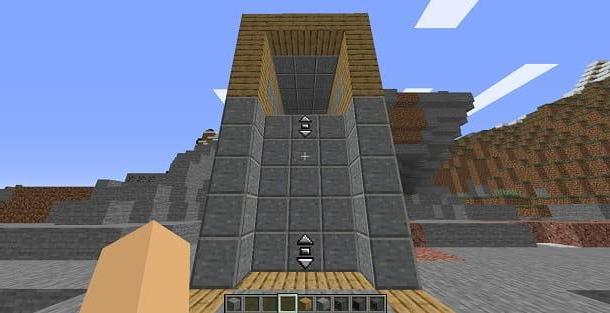 At this point the mod is loaded and ready to use. Moving Elevators adds a few simple blocks used to create a fully functional lift.

The operation is very simple: just place one of the new blocks added with the mod, theElevator Controller, where you want to build the elevator. At this point right click on it and decide the movement speed and dimensions of the platform that will be raised when the lift is operated. You can perform the same procedure for each floor you want to connect with the elevator.

After setting up the elevator, to move from floor to floor, just click on the arrows present on the block you placed just now and the platform you selected will rise or fall depending on the command you gave it. Nothing simpler!

How to make a piston door in Minecraft 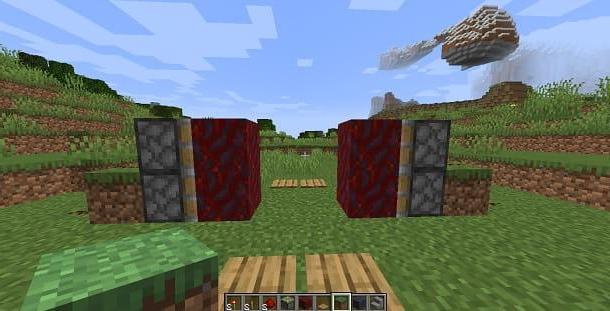 make a piston door in minecraft, again you will need to use i sticky pistons, as the normal ones are not very efficient for this kind of circuits.

Start by placing 2 sticky pistons to the left and other 2 to the right of where you would like to make the door, one above the other. Each row should be apart 4 blocks one from the other. Afterward, place 4 blocks to your liking with which you want to make the door on the extendable part of the pistons.

Continue by placing 1 any block behind each of the 2 rows of pistons, above which you must place 1 redstone powder, Followed by 1 unit of it on the opposite side of the door, one block below. 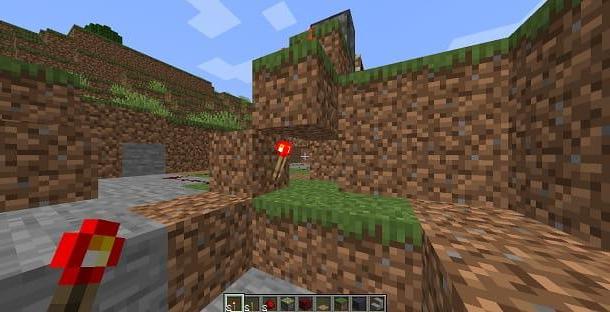 Under the second unit of redstone dust you just placed on both sides, dig a block and place 1 Redstone torch on the side block closest to the outside of the door entrance. If you have done this part correctly, you should hear the pistons operate. 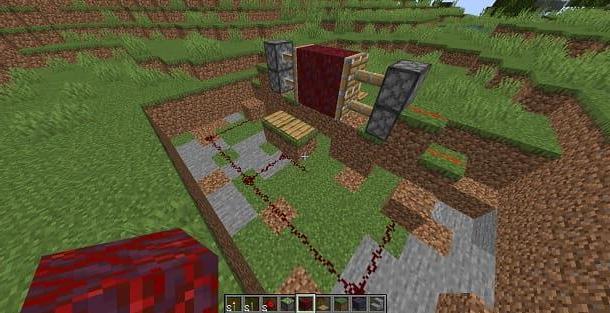 What you need to do now is connect all 4 pistons you have placed. To do this, square 1 unit of redstone behind the 2 blocks on which you have placed a redstone torch and finally place another redstone dust until you have connected the circuit. 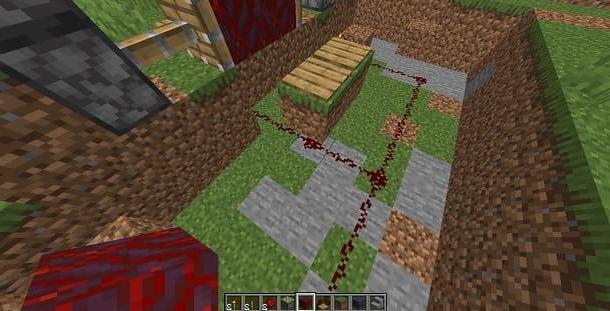 Always starting from the circuit you just created, place another one redstone dust exactly one block below where you want to place the switches that will operate the door, both from the inside and the outside. Finally, place gods on top of it blocks to taste and the switches you prefer, such as the footboards, the buttons or tripping wire hooks. I advise you not to use the levers, as they could cause problems with the correct functioning of the door. 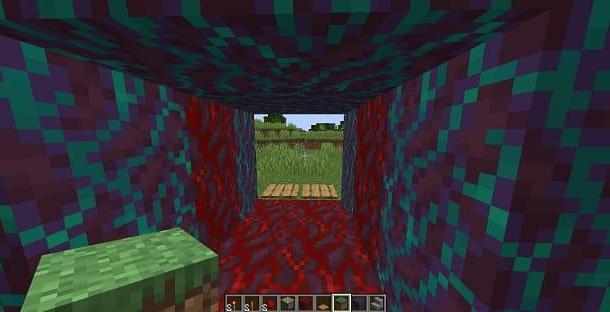 Now that the circuit is complete, all you have to do is close it all with gods blocks to your liking, being careful not to place them in places where they could interfere with the proper functioning of the redstone. This way, you will have one door with pistons fully operational and not bulky. Easy, right?

How to make a piston in Minecraft

add a comment from How to make a piston in Minecraft