How to update Minecraft 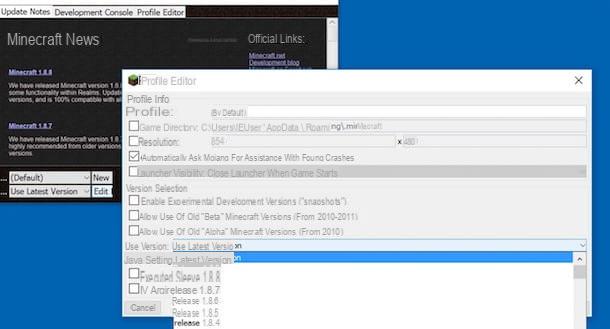 As you surely already know, Minecraft has an automatic update function that checks for updates every time the game is started and, if necessary, downloads them. If an older version of the game is running on your PC, something is preventing this function from doing its job. Thing? Let's try to find out together.

If you can't update Minecraft it is because, most likely, the right parameters are not set in the game launcher. To better understand what I'm referring to, start Minecraft using its icon on the desktop, type your username (if required) and click on Play.

Then wait for the game launcher to appear, expand the drop-down menu version which is located at the bottom left and set the option in the latter Use latest version: any other option will "fossilize" Minecraft on a single version and will not allow you to use the latest game updates. But be careful, it's not over yet.

Once the game has started, to verify that its latest version is in use, check the version number at the bottom left (eg. Minecraft 1.8.9). Then connect to this web page (the unofficial Minecraft Wiki) and check that the number corresponds to the latest version of Minecraft released by the developers.

Have you already downloaded the latest version of Minecraft but want to re-download it after trying unsuccessfully to apply a mod? There are no problems. Close Minecraft, go to the folder where the versions of the game downloaded on the PC are hosted (C: Users [your name] AppDataRoaming.minecraftversions on Windows and ~ / Library / Application Support / minecraft / on Mac OS X) and delete the relative folder to the version of Minecraft you want to re-download (eg. 1.8.9 for version 1.8.9 of the game).

To reach the folder C: Users [your name] AppDataRoaming.minecraftversions on Windows just open a window of the Explorer, type the path in the address bar and press the key Submit on the PC keyboard. To reach the ~ / Library / Application Support / minecraft / folder on Mac you need to right-click on the Finder icon, select the item Go to folder ... from the menu that appears, type the path of the folder in the window that opens and press the key Submit sulla tastiera of the computer.

At this point, start Minecraft again, choose the version of the game you want to re-download from the drop-down menu version and the launcher should automatically start downloading it. But I recommend, before deleting a version of Minecraft from your PC, make a safety backup of the folder that contains it and of the other game data.

Update Minecraft on smartphones and tablets 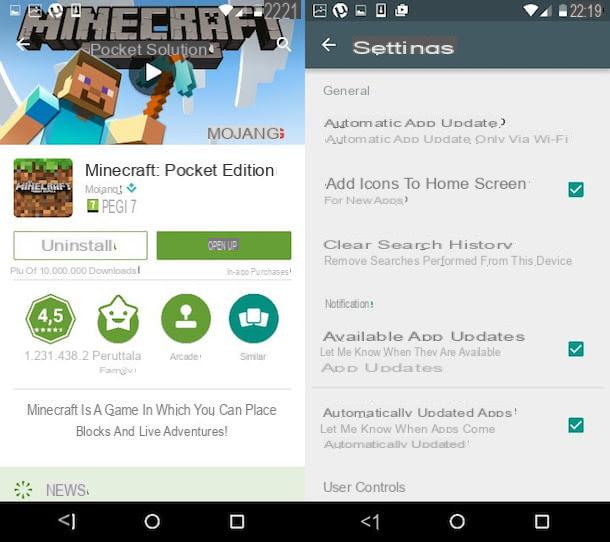 Would you like a hand to update Minecraft Pocket Edition on your smartphone or tablet? No problem, this is really a no-brainer.

A device was used Android, april il Google Play Store (the white bag icon with the "play" symbol in the center located on the screen with the list of all the apps installed on the terminal), presses the icon for hamburger collocata in alto a sinistra and selects the voice Le mie app ei miei giochi from the bar that compares di lato.

Next, locate the icon of Minecraft Pocket Edition, select it and “tap” the button first Update and then on the button Accept (in the screen that opens) to start downloading the latest version of the game.

To activate the automatic search and installation of updates for all the apps installed on your smartphone / tablet (which in any case should be active by default), open the Google Play Store, presses on the ad icon hamburger in alto a sinistra and selects the voice Settings from the left sidebar. Then go up Automatic app update and put the check mark on the item Automatic app update via Wi-Fi only. For more information on this feature, check out my tutorial on how to update Android apps.

Possiedi a iPhone? In this case, to update Minecraft, you need to open theApp Store (the icon of the "A" on a blue background) located on the home screen of the device. After that you have to select the tab Updates located at the bottom right and you have to press the button Update placed next to the Minecraft Pocket Edition icon.

To activate the automatic app update (which should still be active by default), go to the menu instead Settings> iTunes Store and App Store of iOS and move on ON the lever relative to Updates.

How to update Minecraft

96%
We have been able to provide in 96% of times, the solutions that users were looking for when consulting our page.