How to tame a panda in Minecraft

Who I am
Lluís Enric Mayans
@lluísenricmayans 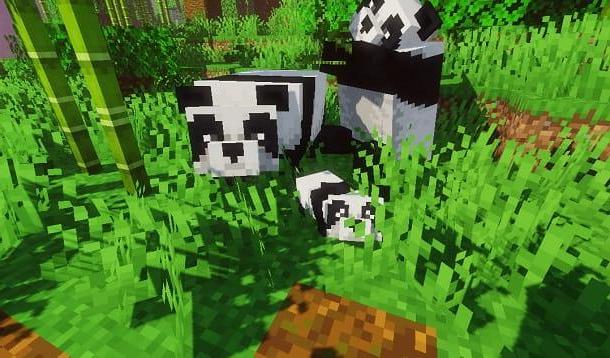 Before I talk to you about how to tame a panda in minecraft, I want to give you some information regarding this curious creature, introduced in the game starting from the version 1.8 (Bedrock Edition) e 1.14 (Java Edition).

You need to know that pandas can only be found in jungle biome, close to Bamboo, of which they are greedy. They are not easy to find and can be "spotted" individually or in pairs. Generally speaking, they are passive animals, so if you get close to them they won't attack your avatar. However, they can have different personalities.

Pandas can be found lazy, which do not interact in any way with the avatar; those aggressive, who defend themselves in the event of an attack; those worried, which avoid the player and any hostile creatures; those bright, rolling on the ground, and those weak, who sneeze all the time. You can easily recognize a panda's personality by the expression it has on its face.

A feature introduced with pandas is that which concerns the genetic traits that can be transmitted to cubs: each panda has "genes" that carry the characteristics of the personality that I have indicated in the previous lines. When two pandas mate, the predominant gene is passed on to the cub, with the possibility that it can mutate, creating a different personality.

Now that you have all the basic information on Minecraft pandas, it's time to see how to find one in the game world, feed it and have it follow you to your shelter: you will find everything explained in the next chapters of the guide.

How to train a panda in Minecraft 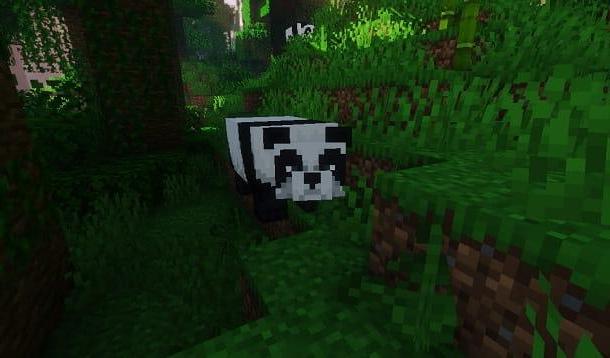 If you want to know how to train a panda in minecraftUnfortunately, I must warn you that these creatures cannot be ridden or tamed, but they will still be happy to follow you if you give them food.

Before delving into the subject, however, you need to identify one bamboo jungle: a biome not very common in the world of Minecraft and therefore difficult to find. Generally, the jungle is spawned alongside the desert or to savana, so if you ever find yourself in one of these biomes you may have a chance to stumble upon it.

If you want to make it easier for you, you can use the command /locate Jungle_Pyramid in the chat, which will allow you to easily locate the coordinates of the Jungle Temple closer to your location. Therefore, you just need to use the command /teleport [coordinate], to immediately reach the jungle. 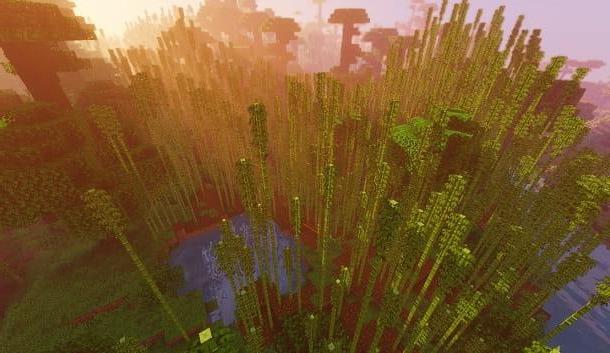 If you want to know more about how to enable the tricks in Minecraft and how to use the commands I have indicated, you can refer to this guide of mine, taking care to replace the strings shown with those I suggested in the previous lines.

When you reach the jungle, pay attention to the vegetation around you, as you have to identify the bamboo sticks. In fact, it is among the bamboo that you will have the best chance of spotting the panda. If luck turns in your favor, you will find some.

What you need to do now is collect some Bamboo, using your bare hands, and equip it in a quick slot. Bamboo in hand, approach a panda, hoping you haven't found one with a lazy personality. If not, the panda will approach your avatar, waiting for you to feed him. 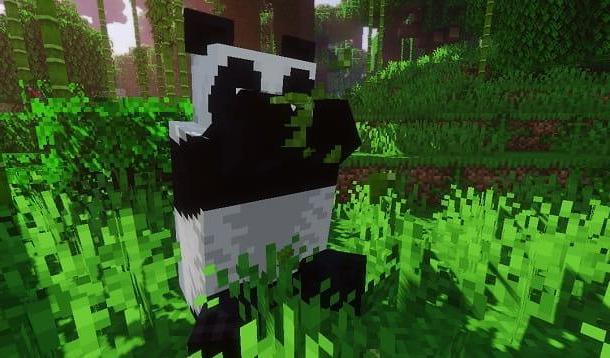 To feed him, interact on the panda with the Bamboo equipped and that's it: you'll see hearts circling the creature, indicating that the panda is happy that you fed it. As already mentioned, you cannot put a leash on the panda or even a saddle on its back to ride it. The panda will continue to follow you if you have bamboo equipped or will remain around, regardless of your presence.

If you have found a pair of pandas, you can find them mating. First, however, you must make sure that there are at least eight bamboo blocks around them: if this condition is met, just feed them and wait a few moments. A panda cub will be available alongside the parents.


How to lead a panda to the shelter 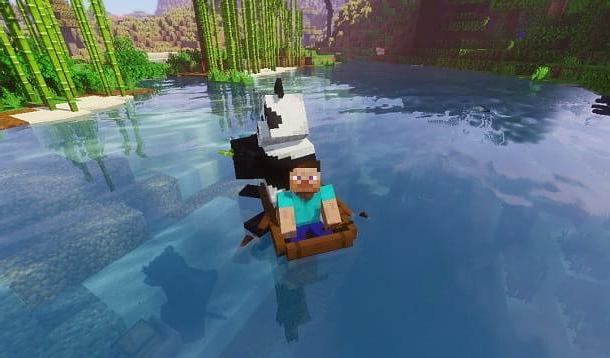 Since the jungle biome can be very far from your shelter, being followed by a panda could be a very long and tedious operation, with the risk of encountering many dangers along the way. In fact, since you can neither ride it nor take it on a leash, a plausible solution would be to lure the creature to you with some Bamboo.

You can understand that this can take a long time if you are several thousand blocks away from your shelter. For this reason, what I can recommend is to carry the panda with one boat to your shelter. Not sure how to build one? In this case, I can come to your aid, recommending my guide on how to build a boat in Minecraft.

In case the jungle is not connected to your shelter with a stream, you can build channels simply by digging the ground (even a single block of depth is enough) and then pouring water into it with a bucket, in so that you can then navigate it with the boat. If, in the meantime, you are worried that the panda may get away or, worse, be killed by hostile animals, you can build a small enclosure or shed to protect them.

Once this is done, you have to place the boat under the panda's feet, in order to force it to climb. The boat does not necessarily work only on the surface of the water, but you can also use it on land. Obviously, on the latter you will notice that the speed of movement is very low, but at least you can head to the stream without necessarily having to be followed by the panda.

If everything went according to plan, the panda will be on the boat and you will then have to sail along the waterway until you reach your shelter. When you have reached your destination, to get him down, you simply have to break the boat: my advice is to use your bare hands, because with the tools you would risk hitting the panda as well. Now all you have to do is let him follow you with bamboo in hand, up to his enclosure.

You can also do this with other pandas, leading them to your shelter, in the enclosure you have set up for them. Make sure you plant some bamboo inside the enclosure so these creatures can reproduce as well, as I explained to you in the previous chapter.

How to tame a panda in Minecraft

add a comment from How to tame a panda in Minecraft

96%
We have been able to provide in 96% of times, the solutions that users were looking for when consulting our page.