How to take a shower in Minecraft 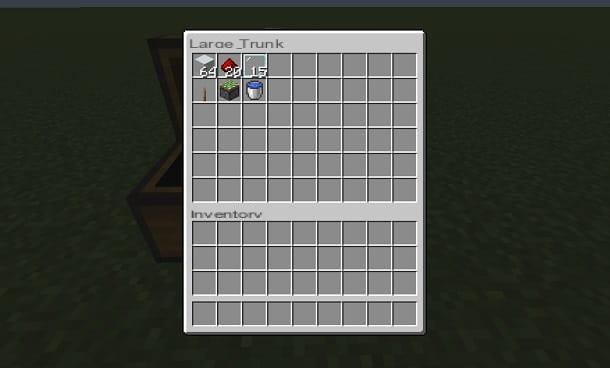 Before we start talking to you about how to take a shower in minecraft, it seems only right to explain what the materials that you will need to use for the realization of this project.

First, you will need gods blocks of any material: you can choose those in Stone, those in colored concrete or any other material that may satisfy your interest. Since a block will serve as an opening and closing valve for the shower, I advise against using obsidian.

Plus, you'll need the Redstone, essential in order to create a circuit for opening and closing the water flow. You can find the redstone in the blocks scattered underground in the Minecraft world.

To this circuit, you will need to associate a appiccicoso piston, which will act as an essential component for the shower water flow valve. To create a appiccicoso piston, you will first need to create a normal one in a bank gives lavoro, using 3 wooden planks, 4 blocks of crushed stone, 1 unit of redstone e 1 iron ingot. You will then need to add to the piston 1 unit of slime ball, obtainable from creatures Slime.

Finally, you will need one leads, obtainable by joining 1 cane e 1 units of crushed stone, and panels of glass, which I told you about in this guide of mine. Don't forget also a bucket, which you can get through 3 iron ingots, to be filled withwater through any source.


Take a shower on Minecraft 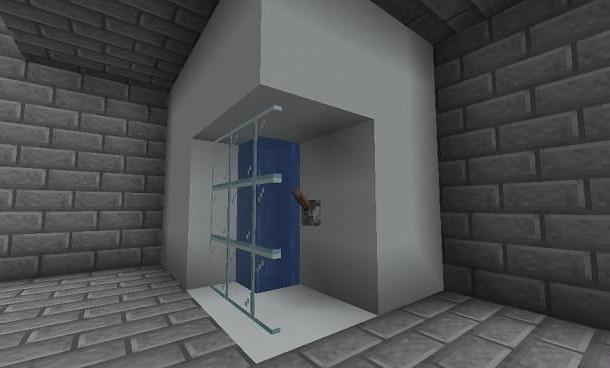 Now that you are aware of all the materials needed for build a shower on minecraft, it's time to roll up your sleeves and start seeing all the steps necessary for the realization of this project.

First, delimit an area of ​​your shelter room that has a size of 6 × 4. For the choice of the area, prefer the corner of the room, which I will use as an example in this guide. Then place the blocks you have chosen to create the flooring for the shower. 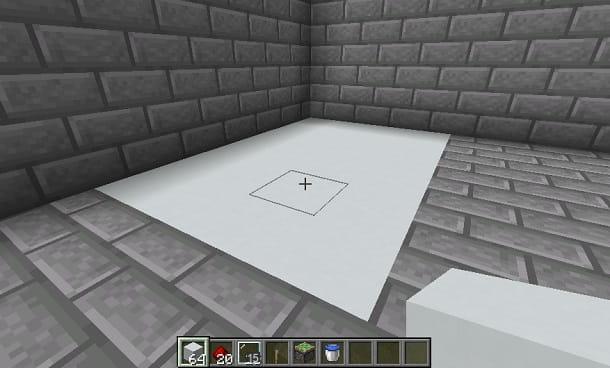 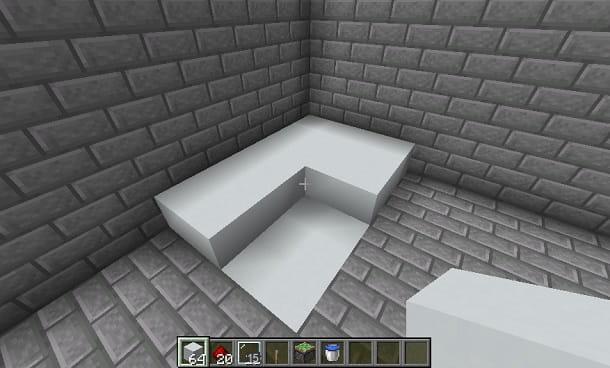 Now, on the long line of blocks you placed, add on top 5 unit of redstone and then place others 2 blocks on the short side, perpendicular to the wall. On these two blocks, you need to place more 2 unit of redstone. 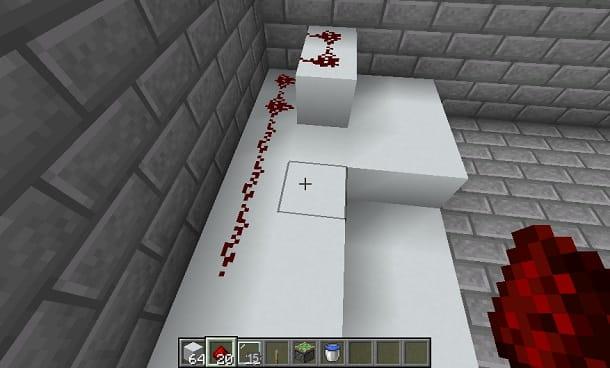 Once this is done, leaving the space of one block from the corner and the base, create a line of 3 blocks on the long wall. On the latter, place 2 unit of redstone and appiccicoso piston horizontally, on whose platform you will need to add 1 block (not obsidian), which will act as a valve. 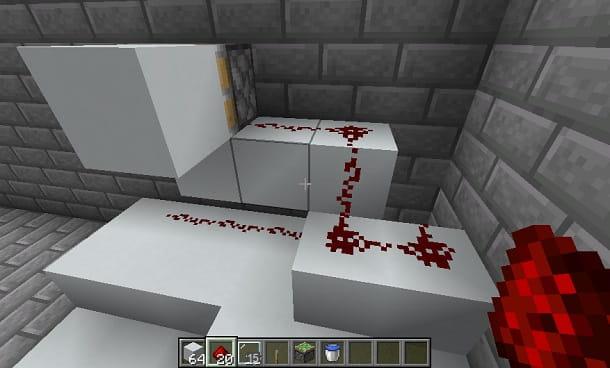 Well: we're almost there! Use i blocks in your possession to create the walls of the shower, which will isolate the newly built mechanism. All you have to do now is create the water tank, which will start flowing as soon as you open the valve. 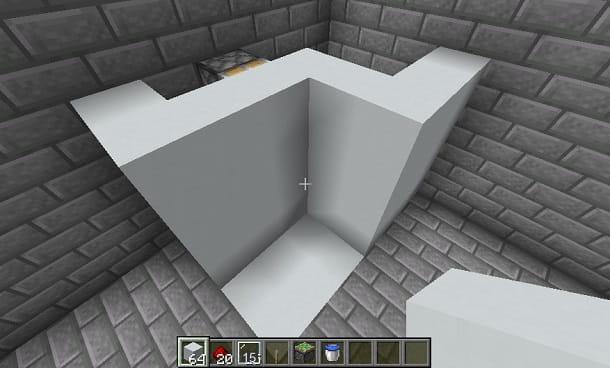 Starting from the height of the sticky piston, create a base 3 × 2, taking care not to position the block next to the one attached to the piston. 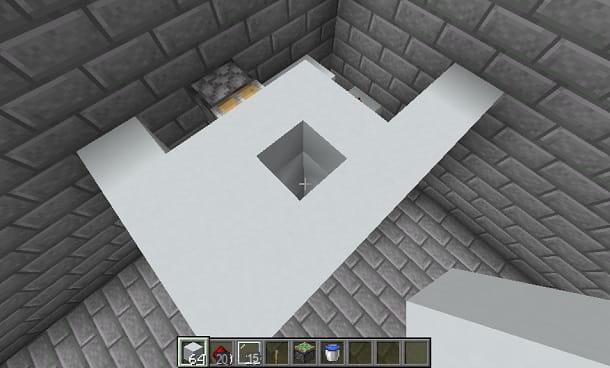 Once this is done, place the i blocks along the entire surface of the shower, so as to close it completely at the top. Then add one leads in the center of the 3 × 3 wall of the shower and interact on it in order to activate the piston, which will close the valve of the tank. 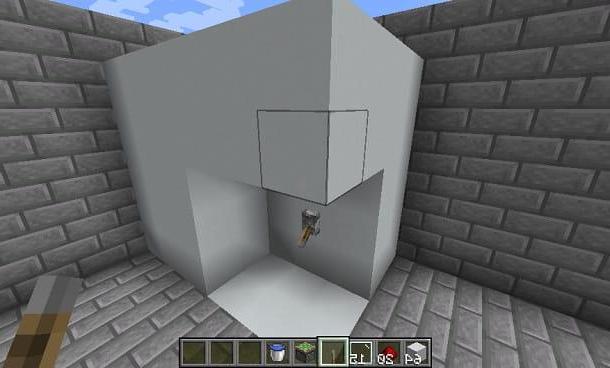 Now that the valve is closed, use the bucket to pay thewater in the tank. 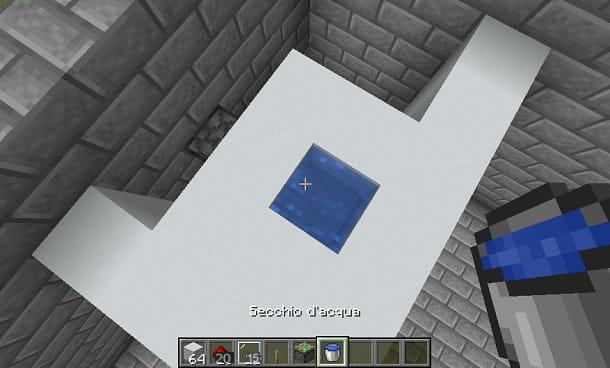 Great: you just finished the shower project!
You just have to decorate it using gods glass panels and remove the block on the base at the valve, so as not to allow water to escape from the shower.

Interacting on the leads, the valve will operate and will open or close the water flow. Convenient, right?

Mod to take a shower on Minecraft 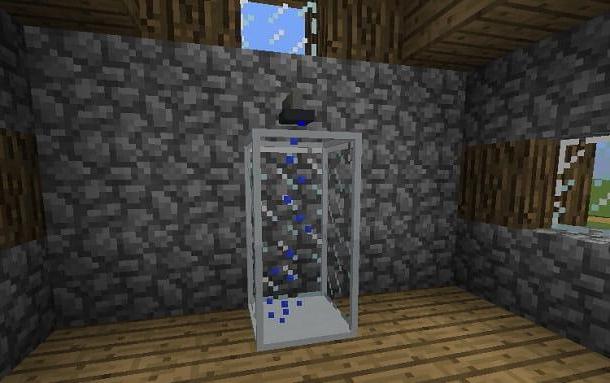 If your intent is to take a shower on Minecraft in a few simple steps, I can recommend the use of the mods. Among the thousands of mods available, I recommend that you use MrCrayfish's Furniture Mod, which allows you to add any decorative element to your shelter, including a functioning shower.

If you want to use this mod on Minecraft, you need to install first Minecraft forge, a program that can be downloaded for free from this website. After reaching the link I provided, go to the left section and click on the version of Minecraft Forge compatible with the mod and press the button Windows Installer, to start the download. Next, double click on the downloaded file and press OK in the box that is shown to you, to install Minecraft forge.

The latter, at the end of the download, must be moved to the folder against that you find in in C: Users [name] AppDataRoaming.minecraft. Can't find it? Don't worry: create it manually within the path in question.

Very well! Almost there: now, start Minecraft and click the icon ▲ che trovi to fianco del tasto Play. Once this is done, choose the profile Forge and premium tasto Play, to start the game with mod support.

Once this is done, to use the mod you installed and create a shower in your shelter, if you are in the mode Creative, open the inventory and go to the tab MrCrayfish's Furniture Mod. Therefore, identify the objects Shower e S and equip it, to immediately place them in your shelter.

If you are in a session in mode Survivalinstead, you can create the object Shower us 6 quartz blocks e 3 glass blocks, in a bank gives lavoro. As for, however, it S, uses 3 iron ingots e 3 stone blocks.

To make the shower work, all you have to do is enter the shower cubicle (Shower) and interact on the shower head (S) to activate it. Easy, right?

Other solution to take a shower on Minecraft 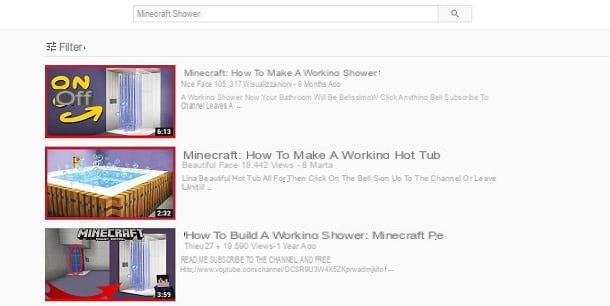 In addition to the advice I gave you in the previous chapters, if you want to know other methods for take a shower on Minecraft, I suggest you use the famous video sharing platform YouTube, where you can find tons of videos made by many Minecraft fans, like you.

To refine your search, after reaching the official YouTube site or launching its app for Android or iOS, use the bar at the top to type the terms "Minecraft shower" or “Minecraft shower”, in English: by doing so, you will be shown all the videos relevant to your research, from which you can take inspiration to create your personal shower project.

How to take a shower in Minecraft

add a comment of How to take a shower in Minecraft