How to ride a llama in Minecraft

I lama on Minecraft they are neutral creatures that do not attack the player: they turn out to be aggressive only if hit voluntarily. Their main attack is it spit: the latter is a very slow and easily dodged projectile that, if it hits the player's avatar, reduces the health bar by 1 life point.

In reality, a llama cannot be ridden like a horse and used to guide the player wherever he pleases. It is only possible to climb onto the back of a llama, but the llama will not respond to any player commands. The only thing that can be done is to drive a llama with a leash.

If it is not possible to ride a llama, then you may be wondering what the use is in taming it. The answer is simple! First, you need to know that, in case there are aggressive wolves, the llama will disperse them, so that they cannot attack.

Secondly, a llama can be equipped with a trunk: Depending on the creature's strength, it is possible to have between 3 and 15 inventory slots available. You have to consider that in case he is carrying a llama with a leash with you, the other llamas will follow him, so that he can form a caravan.

You can understand what I am saying even better: if you have tamed several llamas on which you have installed a chest, driving only one llama, you will be able to have a caravan in tow that is capable of carrying many objects. It can be an excellent solution if you need to transport a large amount of items from one place to another.


How to ride a llama in Minecraft

With this brief introduction to Minecraft llamas, it's time to see how to ride them. Although this action is not useful for taking this animal wherever you want, it is indispensable in the taming process. 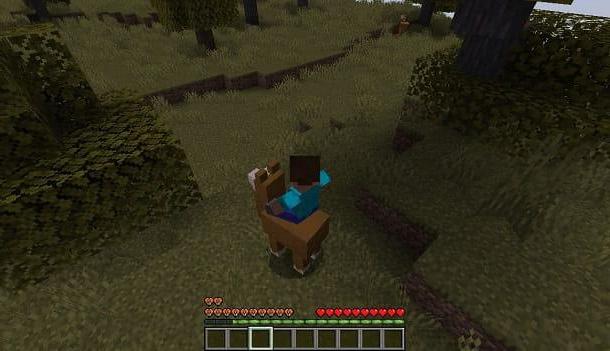 tame a llama in minecraft, you don't need any items. Of course, bringing a specific food can facilitate this process, but it is not essential. Let's see, therefore, in detail how to proceed to be able to tame this creature.

First, you need to know that if you use del wheat, which you can easily obtain thanks to the advice I have given you in this guide of mine, you can make the lama more likely to be tamed.

That said, what you need to do is find a llama: in the biomes of the savana or at the montagne you can find groups of llamas grazing. If you don't know how to find the savannah closest to where you are, using the command console, type the string /locatebiome minecraft:savanna, so as to retrieve the coordinates and reach them, or teleport to them.

Once this is done, approach a llama and, after having equipped at least one ten units of grain in the quick slot, interact on it to feed it. As I mentioned earlier, it is not essential to feed him and you can still proceed with the taming process.

What you need to do is get close to the llama and interact on it, in order to get on its back. In this way, you will be able to ride a llama in minecraft, but without you having any control over the creature's movements.

I warn you that the lama, in case you have not fed him first, will try to unseat you, thus making your attempt to tame him fail. Only by making more attempts will you be able to finally succeed in your intent: to confirm this, gods will appear little hearts sul lama. 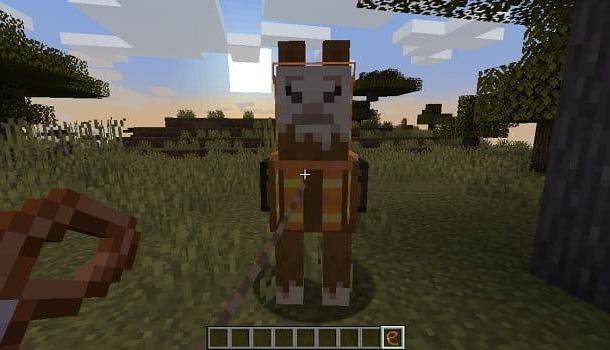 Once you tame a llama, it won't follow you until you use a leash, as I have already explained to you in the introductory chapter of this guide. During your adventures, however, you must be careful that the llama is not attacked by aggressive creatures, as this will inevitably cause it to lose its health points.

In this regard, to restore the llama's health, the only food you can offer to the llama is wheat or hay bale, which you can get by putting 9 units of Wheat in a workbench. The hay bale is the only food that allows the lama to recover 10 health points and, in addition, allows you to activate the coupling mode: if you feed the hay bales to two adult blades, they will produce, after a few moments, a llama cub.

Finally, you need to know that you can embellish a llama by placing one colorful decoration on its back: to do this, you simply need to create a carpet using 2 units of Wool in a workbench. Next, place the rug in the decoration slot present in the llama's inventory.

How to ride a llama in Minecraft

add a comment of How to ride a llama in Minecraft