How to make flashlights in Minecraft

How to build a flashlight in Minecraft 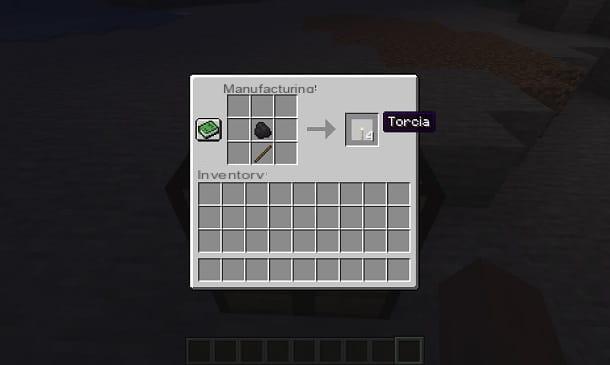 If you want build a flashlight on minecraft, in order to illuminate the rooms of your refuge, the spaces outside or the caves you explore, what you have to do is carefully follow the suggestions that I will indicate in the next paragraphs.

First, to make a flashlight, you will need a Bastone and Coal. Instead of the latter, you can also use the Charcoal. For what concern Bastone, you can easily get it by processing 2 units of Wooden Planks in a workbench. If you don't know how to get the planks, you just need to knit some Logs of Wood in a workbench or section Manufacturing inventory.

Once this is done, you need to get the Coal or Charcoal. The Coal it can be collected by digging underground. As for the Charcoal, you can easily get it by entering del Wood inside a furnace.

After you have obtained all the necessary materials that I told you about in the previous paragraphs, it is time to proceed with the manufacture of a flashlight. Therefore, interact on the workbench, in order to open its interface. At this point, enter 1 unit of Coal (you hate Charcoal) is 1 units of Staff. By doing so, you will be able to withdraw from the slot alongside 4 units of Torches.


How to make torches in Minecraft without coal 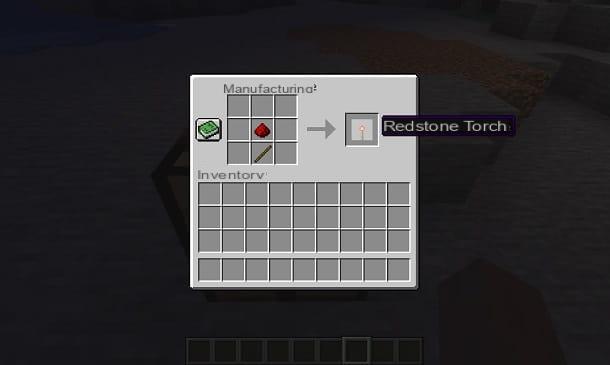 If at the moment you don't have coal or charcoal available to make torches, you can also create a different type: the Redstone Torch.

Compared to the normal flashlight, which I told you about in the previous chapter, the Redstone Torch in comparison it is a bit weaker: you must know, in fact, that this type of flashlight has a brightness power that is halved compared to that of a normal one.

However, you can still light a place with a Redstone Torch, but you will need to use a few more to be able to achieve a level of brightness similar to that of carbon torches. Also, I warn you that the Redstone Torches are mainly used as activators of Redstone circuits and, in case you have some mechanism near the block where you have placed them, you could compromise their functioning.

That said, to make one Redstone Torch, all you need is a Bastone and Redstone dust. For what concern Bastone, you should already know how to make one, as I told you about it during the process of creating a normal flashlight. For the Redstone dustInstead, all you have to do is dig underground until you find the blocks related to this resource.

With that done, open the workbench interface and enter 1 unit of Redstone Dust e 1 units of Staff. If you have followed the instructions I have given you to the letter, you will be able to collect in the slot next to it 1 units of Redstone Torch.


How to build other types of torches in Minecraft 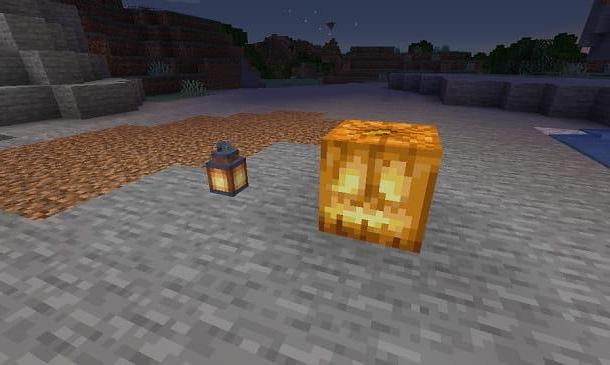 In addition to the torches I told you about in the previous chapters, there are other types of these objects that you can make to light up dark places. For example, you can build one Lantern or a Pumpkin Lantern: These two objects have just a little more lighting power than a normal flashlight.

If you want to make one Pumpkin Lantern, all you have to do is build one first Torch, following the advice I gave you in this chapter, and get yourself one too Carved Pumpkin, which you can easily achieve using Shears on a normal one Pumpkin.

After you have obtained this resource, all you have to do is place 1 unit of Carved Pumpkin in the workbench interface, along with 1 unit of Torch. By doing so, it will be generated 1 unit of Pumpkin Lantern in the slot alongside.

If you want to create a normal one instead Lantern, you need to get some Iron nuggets. To do this, place 1 unit of Iron Bar in a workbench, in order to decompose this object into 9 units of Iron Nuggets. 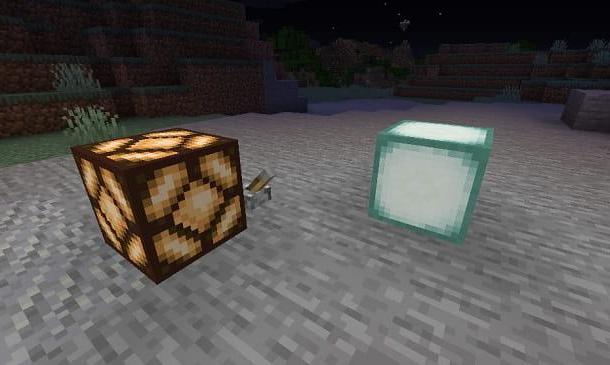 Finally, there are other types of lanterns that you can create, but which do not use torches as a starting point. I am referring to Marine Lantern and Redstone lanterns. While the former can be used to illuminate water-covered areas, Redstone Lanterns require a redstone circuit or switch to activate.

You can make the Marine Lantern joining in a workbench 4 units of Prismarin Crystals e 4 units of Shards of Prismarin. Both of these items can be obtained by defeating the guardians who defend the massive underwater structures.

With regard to the Redstone lantern, you must first get yourself a block of Brightness. You can craft this item in a workbench by combining 4 units of Luminite Powder (which can be obtained by defeating witches or exchanging them for emeralds from village NPCs).

When you've gotten a block of Brightness, place it on a workbench, along with 4 unit of Redstone Dust. You just have to place the Redstone lantern anywhere on the ground or on a wall and place one Leva right next to it.

If you don't know how to build the latter, simply combine 1 units of Staff e 1 units of Crushed Stone in a workbench or section Manufacturing inventory. You can also create circuits with the Redstone dust to connect all the Redstone Lanterns and activate them with a single switch.

How to make flashlights in Minecraft

add a comment from How to make flashlights in Minecraft