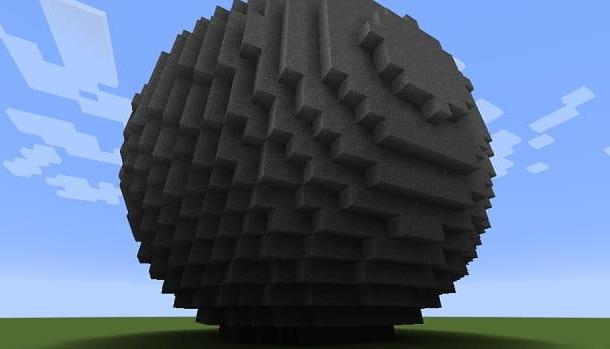 If you want create a sphere in Minecraft, what I recommend you do is consider using a online tool to discover, step by step, all the procedures that allow you to carry out this project.

You must know, in fact, that building a sphere in Minecraft is not a difficult procedure, but it is long and requires a lot of concentration. Considering that Minecraft is a video game made up of square blocks, being able to build a small sphere is not possible, as it will only resemble a square structure.

Therefore, if you want the project you intend to create visually to be a real sphere, you will have to do it large, so that you can eliminate the squaring effect. To do this, the online tool available on the Plotz.co.uk website can help.

After opening the link I just provided you will be shown a section with the 3D model of a sphere. Through the bar at the bottom, called Size, you can change the diameter of the sphere, which by default is set to 32 but you can reduce or increase it using the appropriate icons next to it. 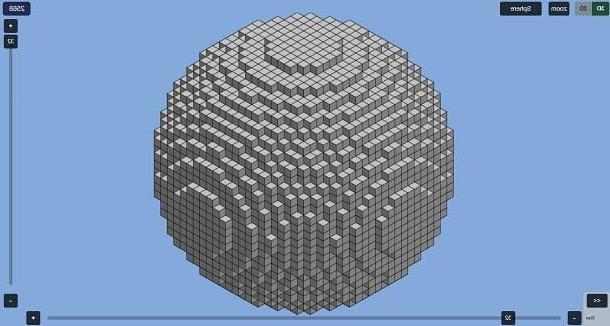 Obviously, trying to build a sphere with a very large diameter value will take a lot of time and a lot of resources, but it all depends on the time you have available and the type of project you want to carry out. 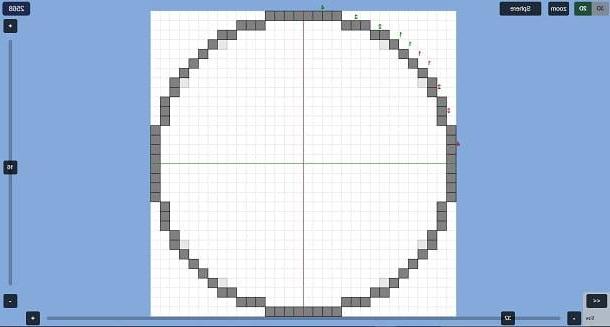 Having said that, to start building the sphere according to the diameter you set in the online tool, you need to move the parameter present in the vertical axis on the right to 1, that is, on the first level of construction. By doing so, you can see the blocks and their arrangement in 3D view.

If something is not clear to you, by pressing the button 2D (top left) you will see the project in detail and you will also be shown the amount of blocks to use in the various sections. 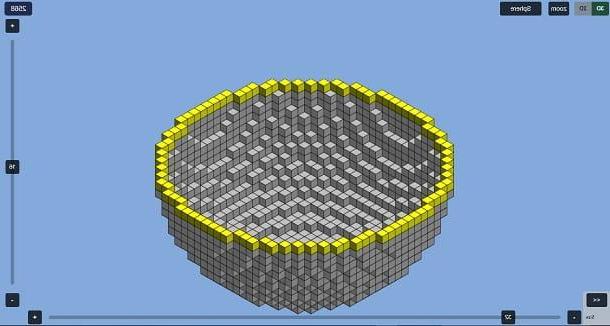 After building the first level, move on to the second and follow the subsequent instructions, as I explained to you in the previous paragraph. As you complete a level, you have to move on to the next one, until you get to the last one, in order to complete the project. Easy, right?

Mod to make a sphere in Minecraft 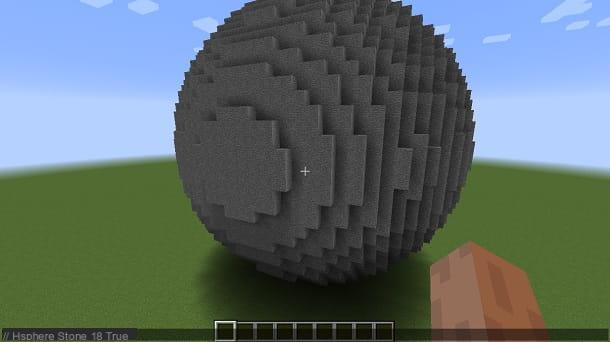 If you want to build a sphere in Minecraft in the blink of an eye, I recommend using one against. Specifically, you can easily make a sphere by using a command string using the mod Worldedit.

The latter allows you to change the world on Minecraft Java Edition for PC to your liking, easily creating structures thanks to the use of command strings. For its use it is necessary to install Minecraft forge, a tool that enables mods to run on Minecraft.

To download this tool, go to the official website and click the button Installer, in the box Download Latest that you find in the center of the page. I remind you that, for everything to work correctly, the Minecraft client version must be the same as that of Minecraft forge and Worldedit. After downloading the . JAR of Forge, double-click on it and then press the button OK to install.


After that, you need to download the mod Worldedit: you can proceed via the official developer website by pressing the button Stable builds for Forge, for the stable version of the mod, or on the button Experimental builds for Forge, to download the version of the mod under development (therefore with potential bugs) which is compatible with the most recent versions of Minecraft Forge.

After that, move the file .JAR just downloaded in the folder mods, which you find in the path C: Users [your name] AppDataRoaming.minecraft. If you don't find the aforementioned folder, you can create it manually.

Now, start Minecraft and click the icon ▼ located next to the button Play of the launcher. At this point, select the profile Forge and then press the button Play. By doing so, Minecraft will run with support for mods, including also Worldedit.

Now, to create a sphere with Worldedit, open the chat by pressing the key T keyboard. The command you will need to use to achieve your goal is // hsphere [material] [radius]. Also, if you enter the term true at the end of the string, the base of the sphere will be generated on the same level as your avatar. By omitting this term, the center of the sphere will coincide with that of the avatar's visual plane.

As for the command parameters, you will need to substitute the value [material] with the appropriate one: stone to create a stone sphere, wood for wood or glass for glass, just to give you some examples. As for the value [radius], you must set any integer value greater than or equal to 1. I advise you not to set too large values, so as not to risk making the game wrong.

For example, if you want to create a sphere of Stone with a radius equal to 18 and that it is positioned exactly on the same ground level where your avatar is, in the command console type the string // hsphere stone 18 true.

How to make a TNT sphere in Minecraft 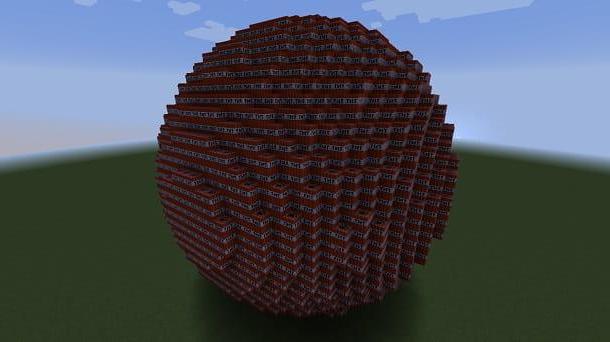 Do you want create a sphere of TNT in Minecraft? In this case, know that you can follow the same procedures that I indicated to you in the previous chapters. Therefore, if you want to build a sphere of TNT manually, you must carefully follow the instructions I gave you before.

Be aware, though, that you will also need to source large quantities of TNT. You can craft this item in a workbench, using 4 units of Sand, commonly found in the world of Minecraft, and 5 units of Gunpowder. The latter is easily obtained by defeating the Creeper, the Ghast or Witch.

If you want to make the task easier by using the mod Worldedit, which I told you about in this other chapter, you will need to set the value TNT as a material. Therefore, using the appropriate sphere generation command, you will have to type the string // hsphere tnt 18 true, to build a TNT sphere with radius 18 positioned at the level of the avatar.

add a comment from How to make a sphere in Minecraft