How to make a plane in Minecraft

Advice on materials to use 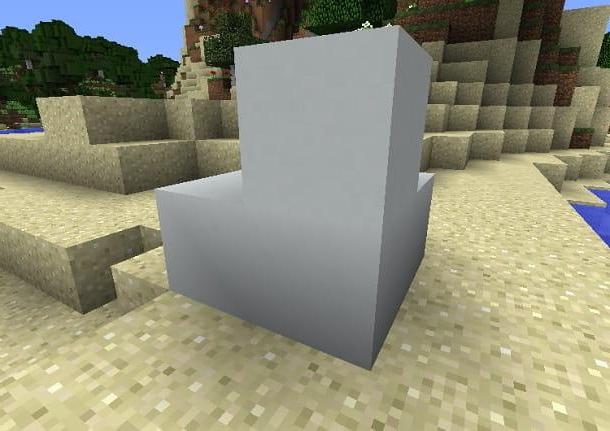 Before we start talking to you about how to make a plane in minecraft, I want to recommend the materials you could use for the realization of your project.

Among the many blocks you can use to create a plane, I recommend using the concrete. This material is interesting, because it allows you to apply many colors, in order to decorate the plane with the colors you want.

To manufacture this resource, in a bank gives lavoro, add 4 units of gravel, 4 sand units e 1 of dye. For example, if you want to get the color White, you have to put the bone meal, while in the case of black ink bag. From this processing, you will get gods concrete dust blocks which, after having placed them and pouredwater above them, you will convert them to concrete blocks.

You can also add different decorations, such as stained glass, using the glass. In this regard, I recommend that you consult my guide on how to make glass in Minecraft.

In addition to the materials listed above, in case you want to make the plane work, you will have to use some specific blocks that you can only obtain through the use of specific mods. I'll tell you in detail about how to operate your airplane in a later chapter of this guide.

Build a plane in Minecraft 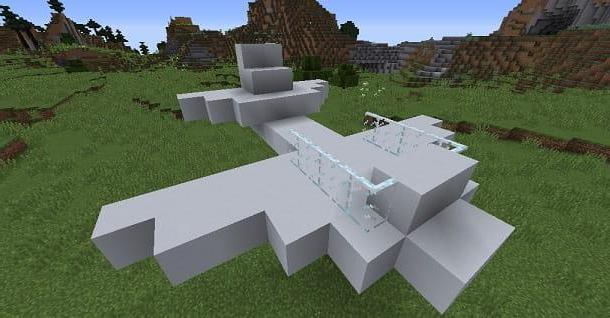 Now that you know what you need to make a plane in Minecraft, it's time to proceed with building it. First, you need to create the project so that it hangs in the air. Therefore, place blocks of any material on top of each other, making a vertical stack of at least 4 blocks in height. 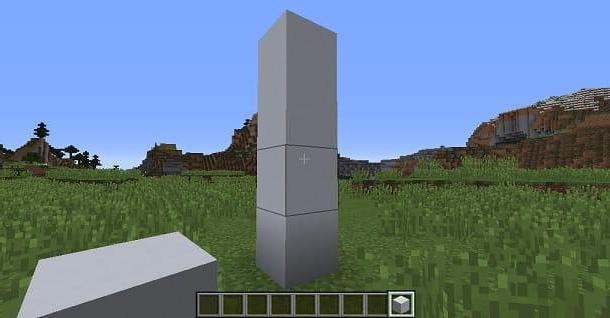 At this point, build the fuselage, starting from the last block of the vertical stack. Create a base of at least 11 x 2 blocks. 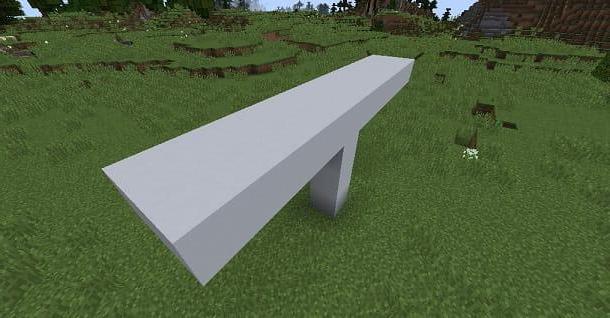 Once this is done, build big ones ali on both sides, leaving two blocks of space from the front area of ​​the aircraft. There is no rule to follow to make the wings: what matters is that they are proportionate to the size of the plane. I recommend at least one large area 3 x 5. 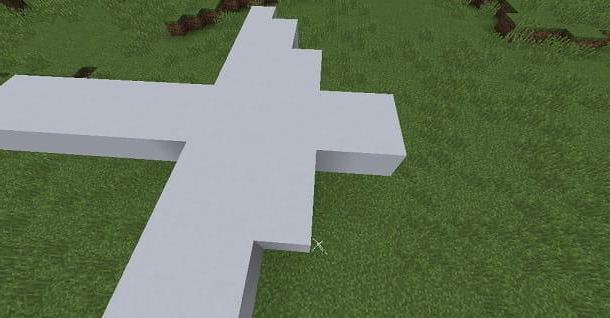 Now you have to build the tail of the aircraft: leave the space of a block from the rear of the fuselage and place blocks in an area 2 x 2.

Once this is done, place other blocks in an area 2 x 2 above them, shifting one block outwards. Finally, add another line of 2 blocks to complete this stage. 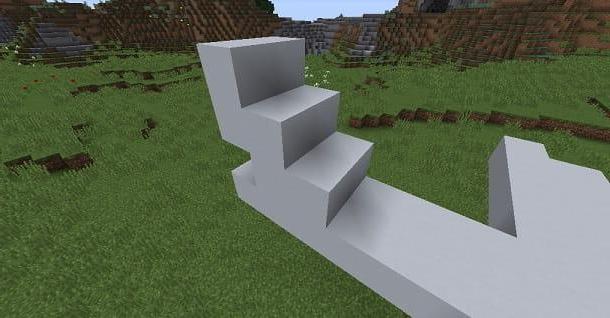 Starting from the base of this structure you made, place a row of 3 blocks and then, next to it, another from 2 blocks, until closing with a single block positioned. Do the same thing with the opposite side, so that you have achieved the queue dell'areo. 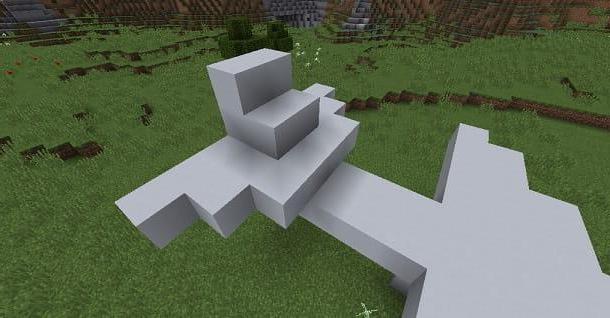 If you want, you can embellish the plane by adding some windows on the sides or any other decorative element. You can also use colored concrete blocks during the different steps described in the paragraphs above, in order to beautify the airplane.

Don't forget to remove the series of vertical blocks that hold the aircraft anchored to the ground.

Create a working plane in Minecraft 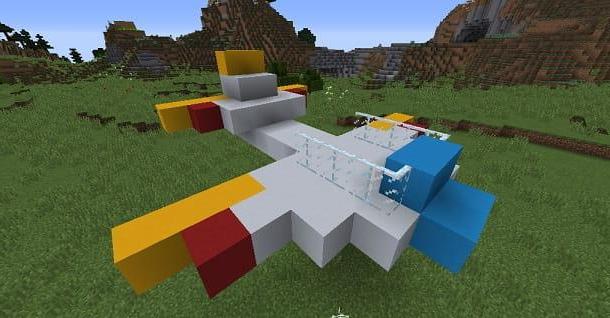 With the procedures you followed in the previous chapter, you built a plane that is not functional. In order for it to truly fly into the world of Minecraft, you need some components that are only available via mods.

In this regard, I recommend that you use the mod Davinci’s Vessels, which allows you to animate your aircraft and boat projects, quickly and easily. To use mods in Minecraft, however, you need Minecraft forge, a software available for free on this website. To download the program installation file, go to the link I provided and click on the item Windows Installer. When the file has finished downloading, double-click on it and, in the box that appears, press the button OK, in order to install it.

Now, join the path C: Users [name] AppDataRoaming.minecraft, using File Explorer, and open the folder mods. If you don't find it, create it manually. In the folder mods, you will need to place the files JAR related to the mods you will download shortly. 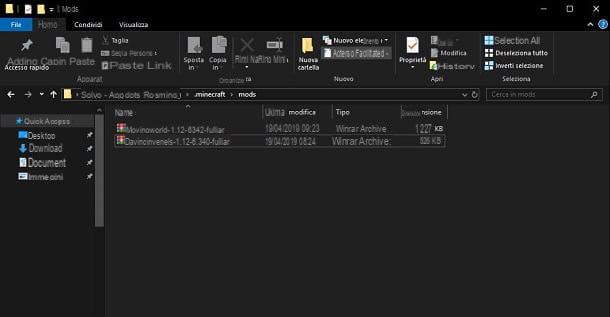 To grab the mods you need to fly the plane, from CurseForge.org, download Davinci’s Vessels e Movingworld, an essential component without which the mod Davinci’s Vessels can not run. The files JAR picked must be placed in the folder mods, which I told you about in the previous paragraph.

At this point, start Minecraft and press the ▲ icon, located next to the button Play. Then select the profile Forge and click Play. Then access the previously created world, where you built the plane, to complete the project.

In the mode Creative, you can find the objects you need to fly your plane: open the inventory using the button I and go to the second page of the inventory menu by clicking on the tab Davinci’s Vessels.

The first item you need is the Ship’s Helm, i.e. the rudder to maneuver the aircraft. Place it on the fuselage, in the front, which will be the cabin. On the tail, instead, in the two remaining empty spaces, place the Steam Engine, which will allow the plane to fly faster, powered with the carbon. 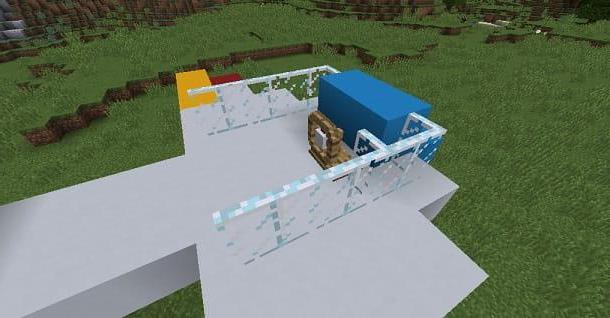 Finally, under the fuselage and wings, add an additional layer of blocks, using the Air Balloon, essential to allow the aircraft to fly.

I advise you to put a quantity of these blocks equal to about 40% of the total blocks used for the project. 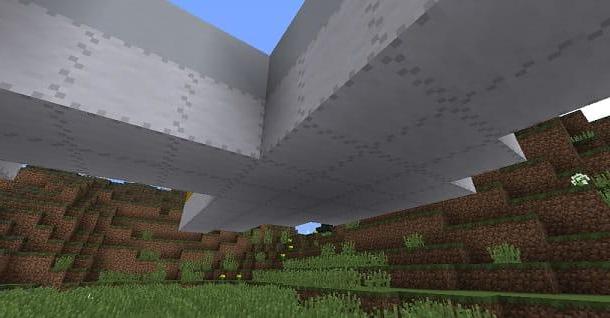 Well, we're almost there! Now all you have to do is interact on the helm and press the button Assemble Ship. Prize for your Mount Ship to start flying the plane.

To raise and lower the plane, use the keys Z e X on the keyboard. Before getting off your airplane, I recommend that you press the button K and to choose the voice Disassemble.

How to make a working plane in Minecraft via mod 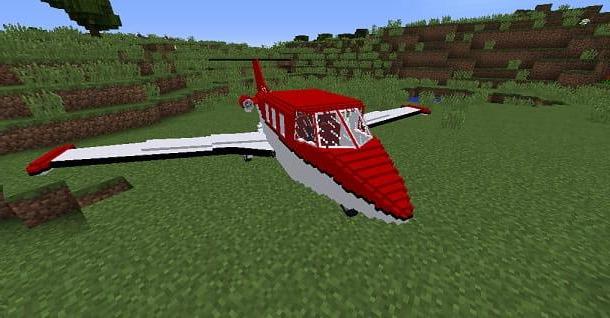 In case you do not have the desire or time to build a plane, you can think of using special mods that allow you to place pre-built aircraft, to be used to fly in the world of Minecraft.

One of those I recommend is Immersive Vehicles in addition to Transport Simulator Official Vehicle Set. To install these mods, you will need to use the add-on Minecraft forge and, subsequently, place the respective files JAR in the folder mods, present in the root path of Minecraft.

In this regard, I suggest you read what I have already described to you in the previous chapter of the guide, to follow the procedures on how to install Minecraft forge and make mods work on Minecraft.

How to make a plane in Minecraft

add a comment of How to make a plane in Minecraft