How to make a helicopter in Minecraft

How to build a helicopter in Minecraft 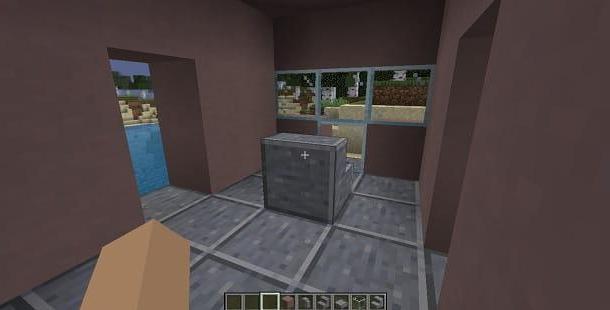 Strange as it may sound, build a helicopter in minecraft with your own hands it is simpler than you might think. Also, since a helicopter is not that big, there is no need to use a large amount of materials.

Obviously, keep in mind that at the moment it is not possible to create a functioning helicopter, except with the use of external mods. For this reason, if you want to build a helicopter in Minecraft without resorting to the use of against (which I will tell you about later), this can only have an aesthetic function. Know, however, that the use of mods is intended, for the most part, only for Java version of Minecraft per PC, so you won't be able to use them in the Bedrock version for Windows 10, consoles and mobile devices. 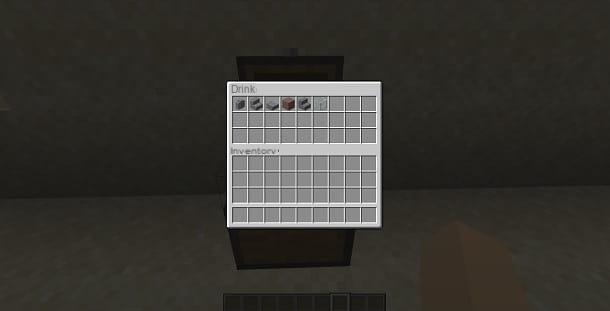 Before explaining to you how to build a helicopter in minecraft, of course, it is good that you are aware of the materials you need to be able to create it.

Well, know that for most of the components of the aircraft there are no specific materials to use: you almost have carte blanche on this. There are, however, some recommended blocks for making a helicopter that you can choose from.

For example, to make the shoes and propellers of the aircraft it is recommended to use the Polished andesite slabs.

To get the Andesite Slabs, you need to find theAndesite, located underground. Once found and collected with a Pickaxe, place three blocks in Work station to create the Polished andesite slabs.


As regards the body helicopter, however, even here you have carte blanche. In any case, I recommend that you use blocks of Colored terracotta of the color you prefer.

for front of the structure, you will obviously need some blocks of Glass. Again, it's up to you to choose the color of the latter.

Finally, there are other additional materials you need to make the details of the helicopter, namely the Polished andesite steps it's a Andesite wall. 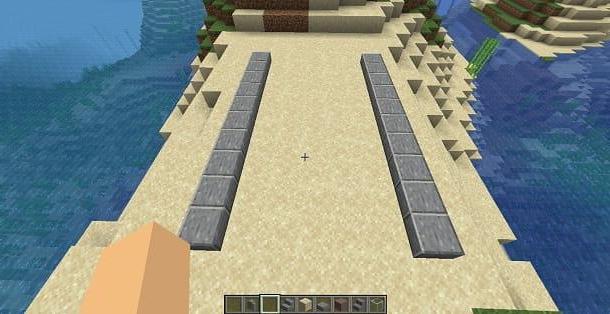 Now that you have all the materials you need, it's time to build the helicopter.

First, I'll start by showing you how to make the shoes. Grab yours, then Polished andesite slabs and create two lines of 10 blocks using the same material. These must be distant seven blocks from each other, so that you have a space of five blocks between the two lines. 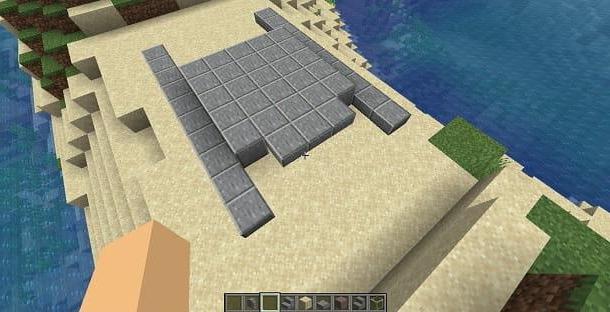 At this point, it's time to build the basis, which will also act as a floor for the helicopter. Then create one 5 × 5 layer of polished andesite slabs, which you have to place between the two previously built lines. Precisely, you have to position them a half block higher than the lines, starting from the third block of the latter.

With that done, you should find yourself with six uncovered blocks on one side and nine more uncovered blocks on the other. Keep in mind that the first mentioned will act as the nose of the helicopter, so decide well how to develop the structure according to the perspective you prefer.

Later, place others ten Slabs of polished andesite under the two sides of the blocks you just placed, five on each side. Finally, place three plates in front of the center of the muzzle, making them protrude. By doing so, you will have finished the helicopter base. 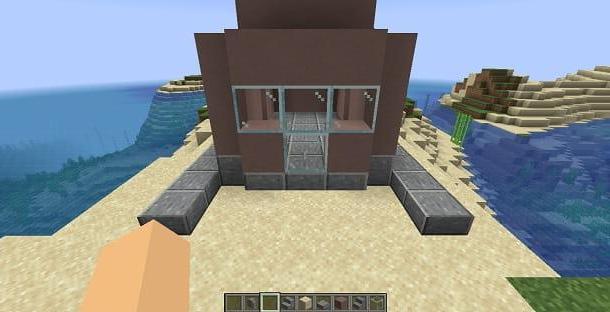 Once you've built your skates, it's time to move on to central body. As mentioned above, you can use any color of Terracotta to make it happen.

for front, you need five terracotta blocks, to be placed over the three protruding slabs. You should find yourself with four empty blocks, which you need to enter four glass blocks. 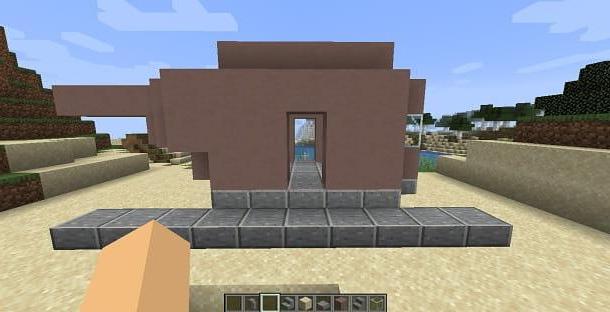 I sides of the helicopter, on the other hand, must be built taking into account the entrance. For each side, then, place thirteen terracotta blocks above the base you built earlier, leaving two blocks in the center empty.

You can decide how to build the entrance as you see fit. You could leave it blank, or you can even place one on it Port. The choice is up to you! 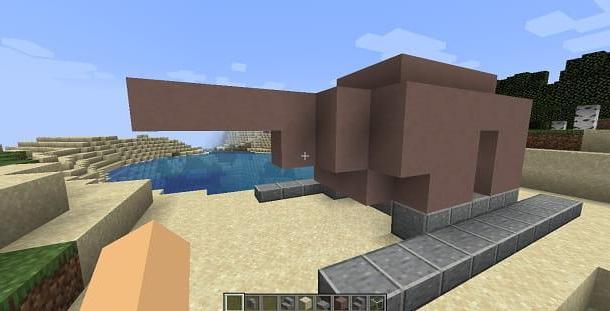 La rear, on the other hand, it is slightly more complicated. Start by creating a layer of thirteen terracotta blocks, closing the inside of the helicopter from behind. You should find yourself with two empty blocks at the bottom, one on the right and one on the left.

At this point, create another layer of 3 × 2 of Terracotta blocks starting from the upper central part. Again, you should find yourself with seven empty blocks on either side. 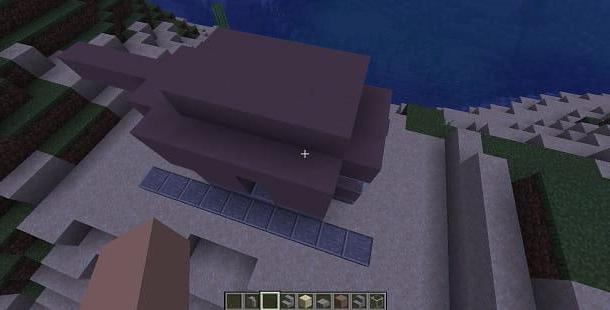 To finish the body, you need to do the roof. So build one 5 × 3 layer of Terracotta blocks, starting one block ahead of the front of the helicopter. 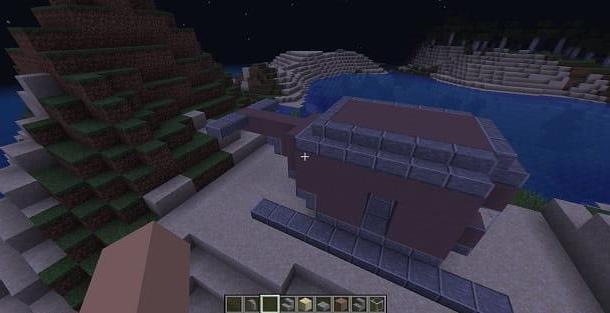 Now that the main body is finished, it's time to add some detail.

Take, therefore, the Polished andesite steps and place them in the uncovered corners of the helicopter as you see fit. You can, for example, place them around the roof, or under the rear of the structure.

Also, you can build a torque reaction rotor on the back. To do this, simply create two horizontal lines from two blocks of polished andesite slabs and place them to the right and left of the last block of the helicopter's tail.

Finally, always using the Polished andesite steps, you can create one or more chairs inside the helicopter. If you are interested in building some more detailed chairs, however, then I refer you to my guide dedicated to the subject, where I explain how to make a chair in Minecraft. 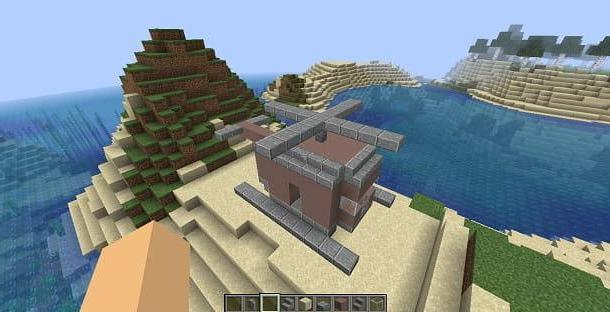 The helicopter is almost complete! You just have to build the last part of the aircraft, which is thepropeller.

Start by placing a Andesite wall in the center of the helicopter roof. This will act as a link between the propeller and the main structure of the aircraft.

At this point, create a + symbol using the Polished andesite slabs. Each blade should be long five blocks, including the one in the center.

That's all: the helicopter is done! As I mentioned earlier, this can only serve as a decoration to your world. If, on the other hand, you would like to build a working helicopter on Minecraft, continue reading this guide.

How to make a working helicopter in Minecraft (mod) 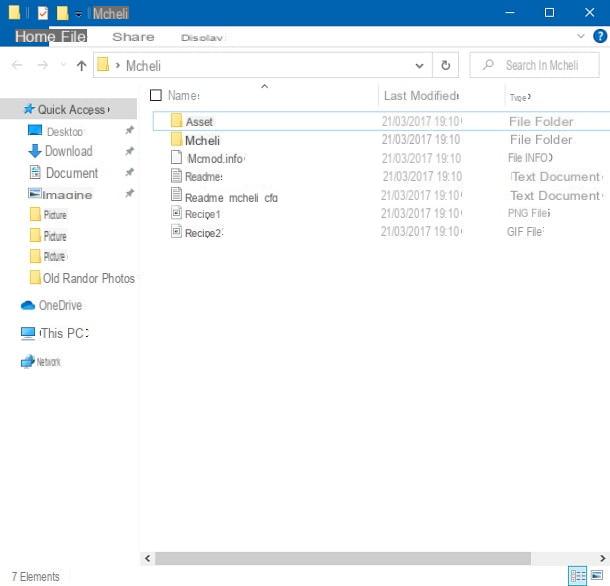 make a working helicopter on minecraft, you can rely on the use of some against.

Before continuing, however, I invite you to pay attention to the unofficial files you download, as they could cause damage to your computer. Therefore, make sure that the download sources are always reliable.

Also, as I mentioned in previous chapters, keep in mind that most mods are only compatible with the version Java of Minecraft, which is only available on PC.

That said, we can start with the explanation. First, you need download Forge, that is a program that is used to load and read the mods created by users. In case you don't know how, I refer you to my guide, in which I explain how to install Minecraft Forge.

After you've done that, it's time to download the MCHeli mod. This will add a huge variety of aircraft to the game, including helicopters.

You can delete the folder META-INF that was generated by the extraction, as it could give problems to the functioning of the mod, and is therefore superfluous. 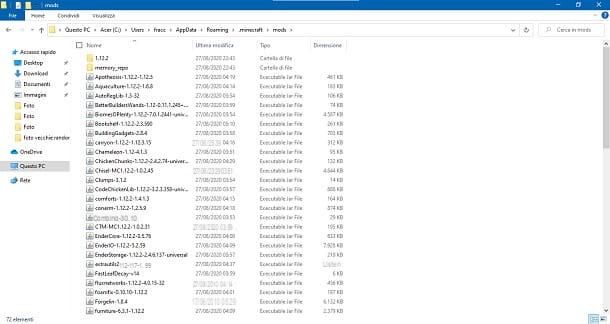 At this point, you need to move the folder you just extracted into the main Minecraft files. To do this, call up the menu Run pressing Win + R, type the command % Appdata% and by Submit. By doing so, you should open the folder roaming.

Now, head to the folder .minecraft > mods. Once here, all you have to do is drag the folder you extracted from the .zip file into the folder mods.

If you are using a Mac, the mod folder is ~ / Library / Application Support / minecraft / mods. In case you can't see the paths just mentioned, turn on the display of hidden folders. 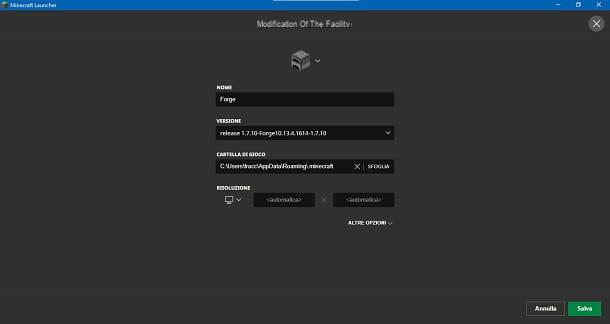 To change the Forge version, start Minecraft and hit the tab installations. At this point, locate the version of the game named Forge, quindi premi sull 'three dots icon and then on the button Modification.

All you have to do is start a Minecraft world to your liking by clicking on the button Single player and selecting the world you prefer. Alternatively, you might as well think of create a new worldby pressing the button Create a new world.

In any case, I recommend that you start a world in Creative mode, as most of the mod content cannot be obtained in Survival mode. 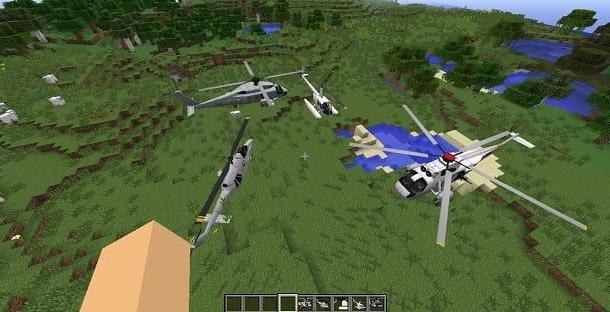 If you have followed my instructions correctly, just open theInventory in Creative mode and then press onicon>, to view all the contents added by the mod. Specifically, this adds about fifty aircraft including planes, helicopters, airplanes and more.

Start, then, placing a helicopter to the ground. To do this, simply select it from the inventory and wield it. At this point, right click on the Plot to bring up the helicopter.

get inside the helicopterInstead, just right-click on it, pointing at it with the mouse. At this point, you can start the engines by pressing Spazio (o W, depending on the aircraft).

Some helicopters are also equipped with Weapons. To use them, just press the left mouse button. Also, you can move the latter to adjust your aim. 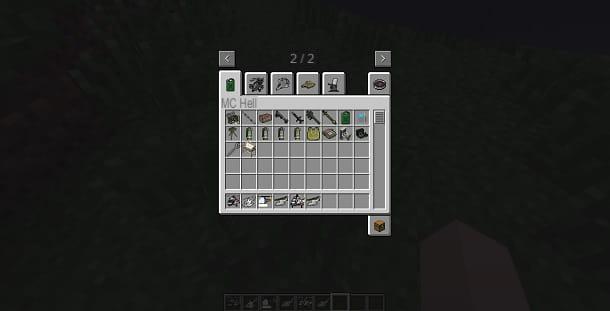 The mod also includes some objects that make it even more complete, which can be built with the materials already present in the normal version of Minecraft.

You will have, therefore, got to see with your own eyes that the MCHeli mod adds a huge amount of content to Minecraft, especially designed for users looking for a game mode that also expands to the skies of the game. Thanks to this mod, in fact, it is possible to have a very immersive experience, also thanks to details such as theinterface of each aircraft, treated differently for each of them.

How to make a helicopter in Minecraft

add a comment of How to make a helicopter in Minecraft