How to make a cannon in Minecraft 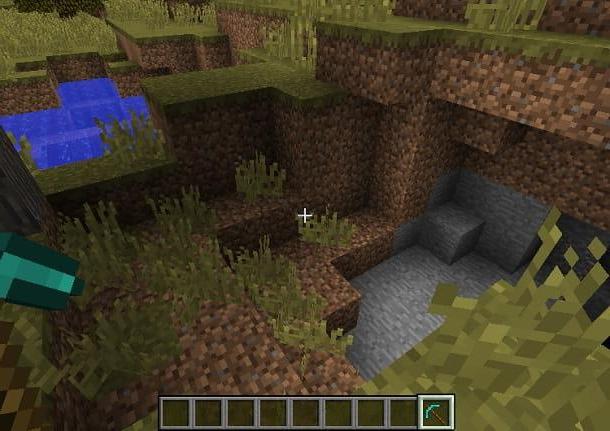 Before explaining to you how to make a cannon in minecraft, it seems only right to show you the necessary resources and useful tools to complete this project.

First, you need a building material like Stone or even theobsidian, to build the gun frame. L'obsidian it is the material I recommend you use due to the fact that it is not destroyed in the event of an explosion (and considering that the cannon contains explosive elements, if something were to go wrong, the entire structure would not be destroyed).

If you want to use obsidian, build a diamond pickaxe and get several buckets of water. Then reach a place with del magma and pour us thewater above, so as to cool the lava, turning it into obsidian. Through diamond pickaxe, you can then collect this resource. 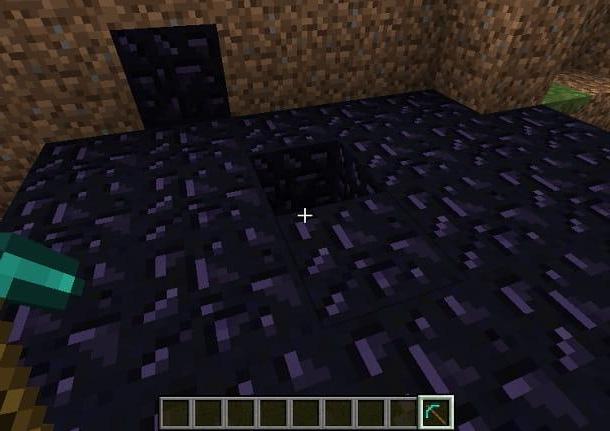 Another material you need is the redstone, which is useful for starting remote mechanisms. There redstone it can be found in the mines, using a pickaxe to collect this resource from the appropriate blocks (the ones with red elements on each face of the block).

In addition to the redstone, you will need the redstone repeaters: these objects have the purpose of delaying the sending of a signal that runs along a line of redstone, useful for triggering the explosion of the bullet at the last moment.

To build this item, you first need two redstone torches, which are obtained from the union of a stick it's a'redstone dust unit. Once you have these torches, combine them into one bank gives lavoro along with a unit of redstone dust and three stone blocks, to get a redstone repeater. 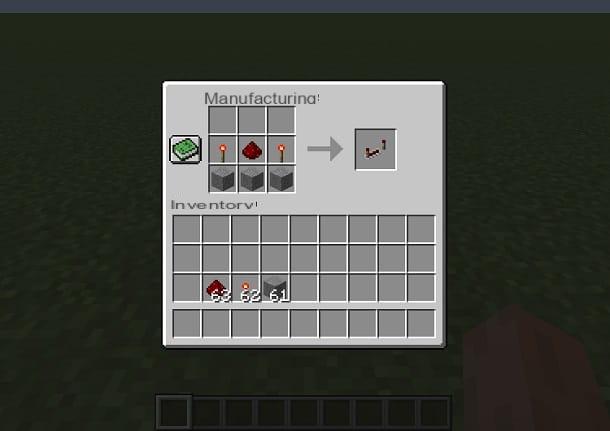 You will also need a unit of sheet of the same material you used for the construction of the gun frame. A sheet is obtained by inserting, in a bank gives lavoro, three units of a material, such as theobsidian or the Stone, in Horizon.

A mechanism that you will have to use in the cannon to automatically load the shots to be fired is the distributor: the latter is obtained by combining in a workbench of seven units of pietrisk, an arc and a unit of redstone dust. 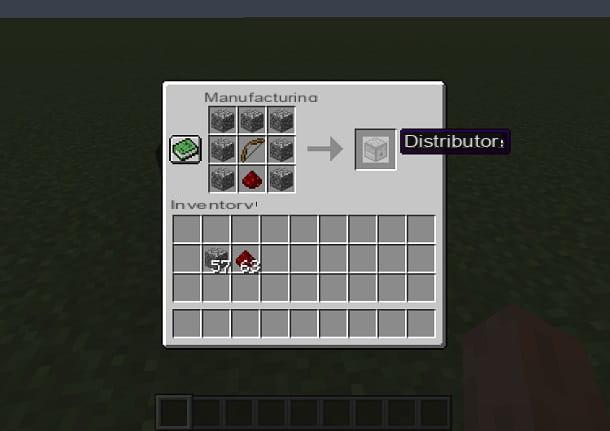 Finally, you need a secchio d'acqua it's a button. The latter can be created in a workbench, simply using a block of any material.

Don't forget the most important material: the TNT. You can create it using five units of gunpowder and four of sandin bank gives lavoro. The sand you can find it in desert biomes or near waterways, while the gunpowder it is obtained by defeating creepers or witches or inside the trunks scattered in the world of Minecraft.


Build a cannon in Minecraft 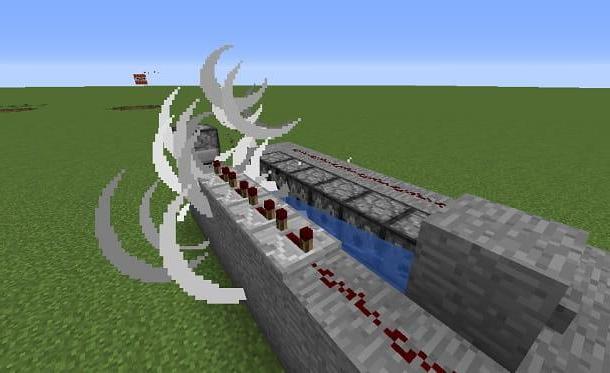 Now that you know the materials and objects you need to build a cannon, it's time to get to the heart of this guide. 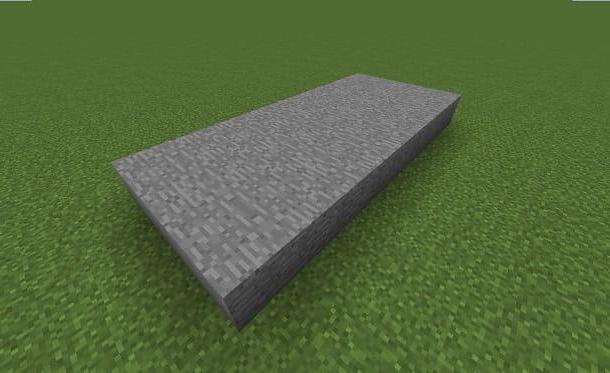 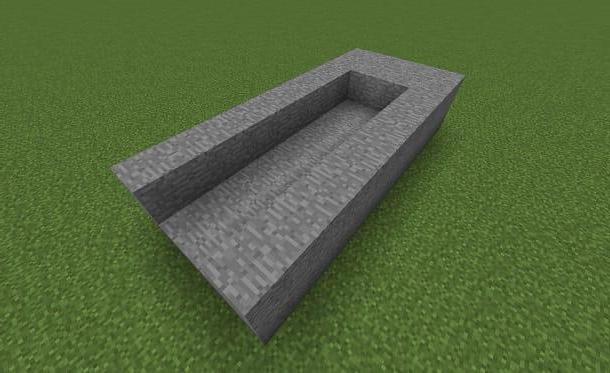 At this point, it's time to place the manager: insert them a row of 6 units in the middle section and then one on the lower corner, as you can see in the image below. I recommend: the dispensers must have the outlet holes facing inwards. 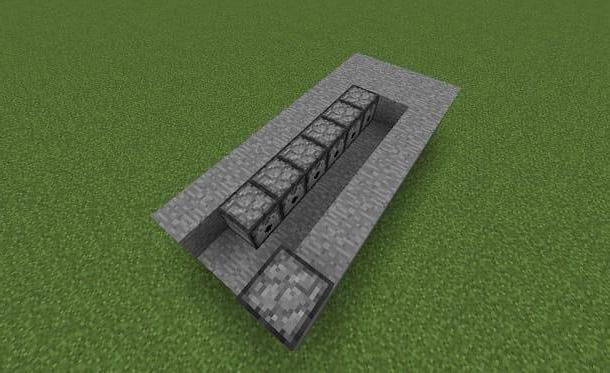 Once this is done, place the redstone dust along the side where the 6 dispensers are positioned. On the other side, however, you will need to apply a unit of powder di redstone close to dispenser, then followed by 4 redstone repeaters, on which you will have to set the maximum delay. Then add 2 unit of redstone on both sides. 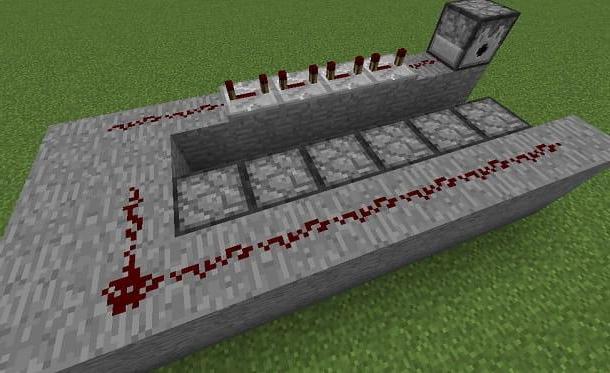 Almost there - place a stone block between the two redstone lines, so as to merge them, and add a button on the latter. On the other short side, instead, insert a stone block alongside the dispensers and one sheet, in order to complete the frame of the gun. 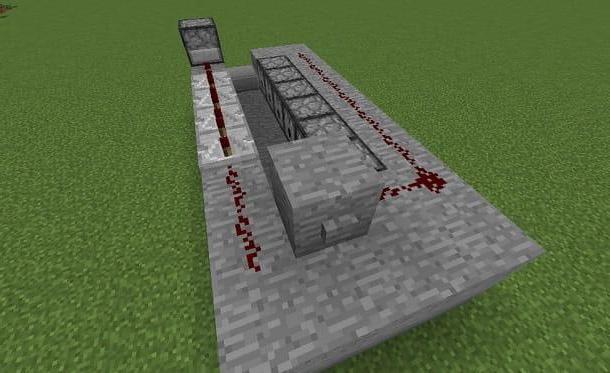 After performing these operations, place the avatar inside the cannon, between the blocks and dispensers, and destroy the stone unit in front of you, the very one that is under the block with the button. At this point, use the secchio d'acqua to fill the hole with water and slide it into the cannon frame. 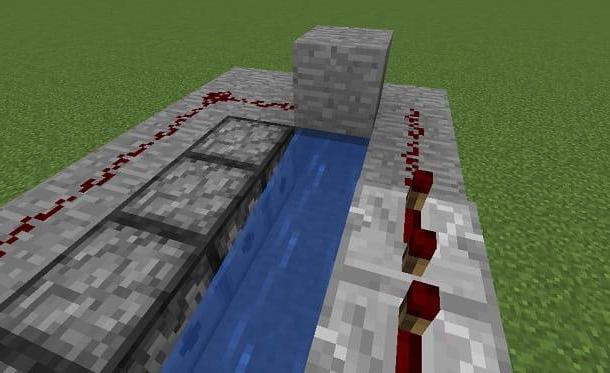 Very good. If you have followed the procedure I indicated in the previous lines to the letter, the cannon will be ready. You will just have to stock all dispensers with some TNT And that's it. 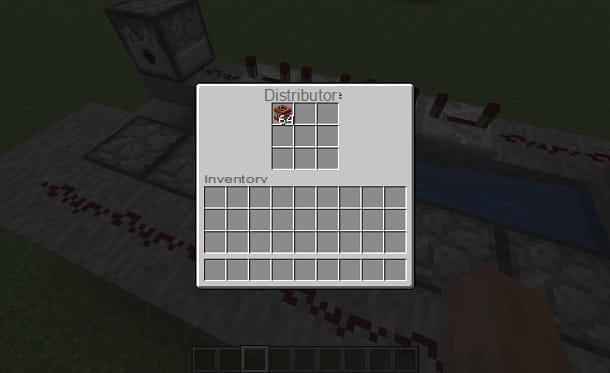 When the 6 units of TNT have exploded, the last TNT already triggered will fly away forward, destroying anything it finds along its flight. 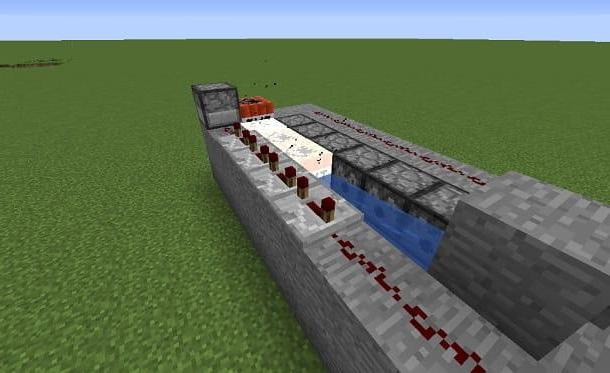 The cannon I showed you has high firepower and fires shots at long distances. In case you want to adjust the shot, I advise you to empty some dispensers, reducing the power from 6 units of TNT to 5 or less. A smaller amount of TNT will allow the shot to travel less distance and reach closer targets.


Mod to get a cannon on Minecraft 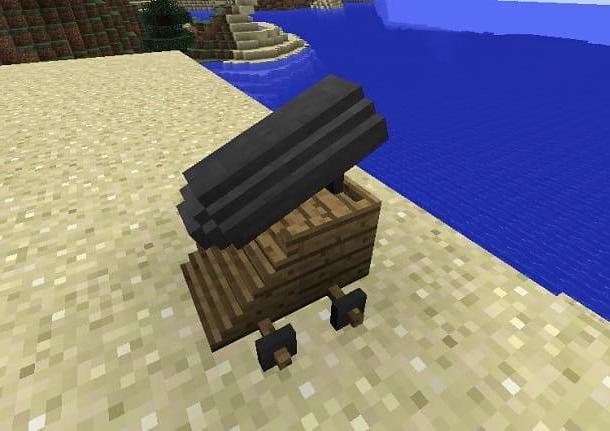 In addition to the solution that I proposed to you in the previous chapters, you can decide to install mods for Minecraft that add cannons in this video game. An example is Myles’ Cannon Mod, available for free at CurseForge.com.

To use this mod, you need to install Minecraft forge, a tool for managing these additional third-party content. Then go to its official website and click on version number that you find in the sidebar, which is compatible with the mod. Once this is done, download the file .exe using the key Windows Installer.

After downloading it, double-click on it and hit OK, in the box that is shown to you, to confirm the installation. At this point, reach the path C: Users [name] AppDataRoaming.minecraft means File Explorer Windows and navigate to the folder mods. If you don't find it, create it manually.

What you need to do now is create a new game or access an already created one and open the avatar's inventory in mode Creative. By clicking on the tab Research, you will find the cannons by searching for the term "cannon".

How to make a cannon in Minecraft

add a comment of How to make a cannon in Minecraft