How to install mods on Minecraft 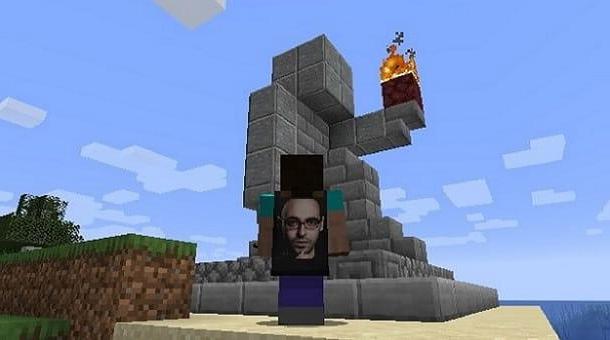 Before going into the details of the procedure on how to install mods on minecraft, I think it might interest you to know more about this possibility.

Well, mods represent gods community-created content, that is, by fans of the game, just like you. In fact, the latter wish to expand the basic experience of the Mojang title, introducing the most varied elements within it.

There is even some content capable of completely transform the game, introducing new modes, as well as mechanics that would not originally be present. On the other hand, Minecraft is based on "cubes" and this means that fantasy plays a central role in the virtual world created by Mojang.

In short, the community's creations are boundless and can make you “experience” Minecraft in a totally different way. You must know, in fact, that there are contents that can completely rewrite the gaming experience, perhaps by making changes to the weapons or to the graphic impact, as well as to practically everything related to the game. map. 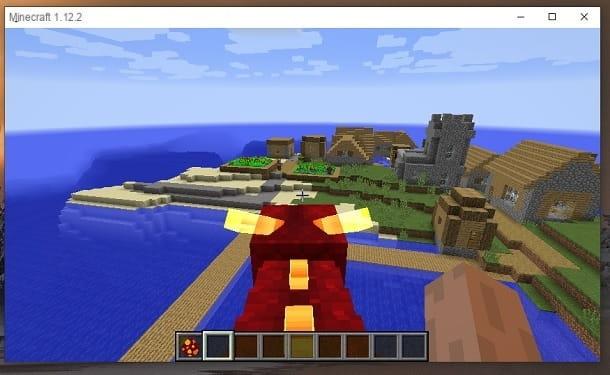 I understand, therefore, the reason why you intend to enter this world and I am here to make you move the first steps in this sense, leading you to discover how to use the mods.

Obviously, Minecraft is a title that is distributed for various platforms, so I'll make a necessary distinction from that point of view. L'Java edition for PC is the one that offers the greatest possibilities in terms of content created by the community, but in reality also the Bedrock version is able to guarantee excellent satisfaction. For all the details, read on.


How to install mods on Minecraft Java 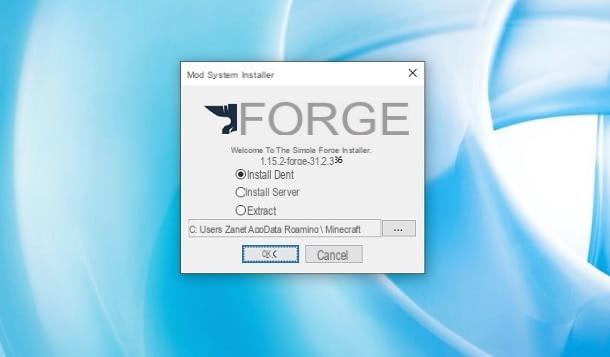 The version of Minecraft most appreciated by mod lovers is definitely that Java by PC. In fact, the latter has an unlimited amount of content created by the community.

Before starting with the procedure, I would like to introduce you to the main "channel" where users generally find the mods. I'm referring to the CurseForge portal, which until June 2020 was owned by Amazon's Twitch platform. Today, however, following an acquisition, the website has become the property of Overwolf.

In any case, it is from this portal that PC users typically download mods for the Java version of Mojang's title. However, you should know that there are also many other companies that make available content created by the community. Just to give you a concrete example, you might be interested in checking out the 9Minecraft website which also offers a wide range of community-made content for Minecraft.

For the rest, the most popular method to install mods, as far as the Java edition of Minecraft is concerned, is to go through the tool Forge, designed for this very purpose. Downloading and installing the latter is particularly simple: just reach the official Forge portal, choose the correct version, compatible with the mod, from the list on the left and press the button Installer. 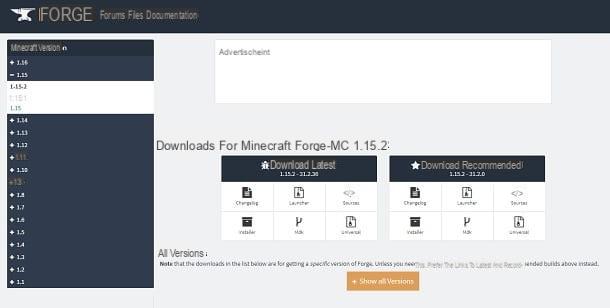 You may be asked to skip some advertisements, perhaps by pressing the button Skip present at the top right, but then you will get the file forge- [versione] -installer.jar. Once the latter is open, all you have to do is check the box Install client and click the button OK.

Perfect, now you have a profile intended for mod. If you want to verify that everything has been done correctly, you can start the Minecraft launcher and take a look at the profiles available through the appropriate box at the bottom left, next to the button PLAYS.

Typically, mods downloaded from one of the aforementioned portals have .jar extension and they simply go moved / copied to the appropriate folder dedicated to content created by the community. Up Windows the path to follow is C: Users [username] AppDataRoaming.minecraftmods, while on MacOS is ~ / Library / Application Support / minecraft / mods.

If you can't reach the appropriate path on Windows, I recommend that you follow my tutorial on how to view hidden folders, as that could be the problem. Either way, you shouldn't find it particularly difficult to place the mod files in the correct place. 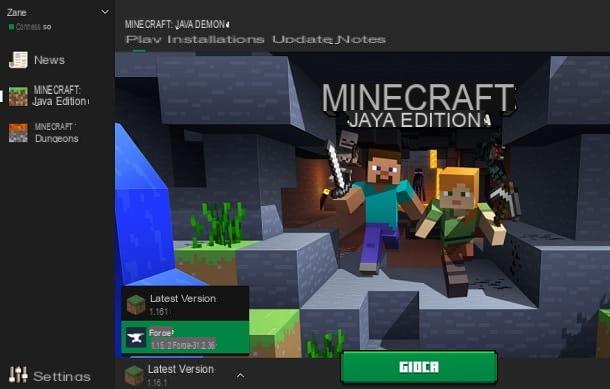 Once this is done, everything is ready: just start the Minecraft launcher, select the profile forge using the box that I showed you previously and press the button PLAYS. After that, you just have to join any game, maybe in Creative mode, and use the mods chosen.

Obviously, the procedure for accessing the contents depends on what you have chosen to install, but generally for many mods just press, in Creative mode, the button E on the keyboard, select theright arrow icon and click on box of mod, which is usually found in the upper left.

By doing so, you should find theinventory of added items from the content you have installed. In short, in the end, using mods is quite simple. If in doubt, however, you can refer to my tutorial on how to install Forge. 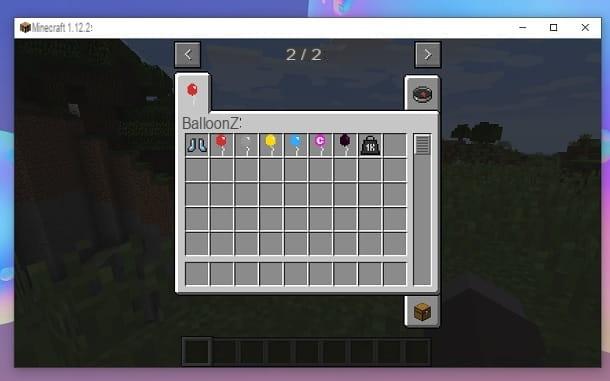 For the rest, to learn more about the subject, you may also be interested in taking a look at my guides on the best mods for Minecraft and on how to change version on Minecraft (in case you download mods for specific versions of Minecraft other than the one you you currently use). Furthermore, for the sake of completeness of information, you should know that there are also some "independent" mods that go beyond Forge.

For example, you might consider checking out my tutorial on how to install shaders on Minecraft, in which I went into detail about other possibilities offered by this boundless world (who said Optifine?).

How to install mods on Minecraft Bedrock

If you usually play Minecraft using the Bedrock version of the game, available for Windows 10, mobile devices e consul, below you can find all the details of the case about the installation of the mods.

How to put mods on Minecraft PE or Windows 10

There are not a few who still refer to the mobile version of Minecraft with the name Minecraft PE (Pocket Edition), but that's a mistake. For a good while, the edition of the game for smartphones and tablets was actually called that, but today it is simply called Minecraft, as it is the Bedrock version of the game also available for Windows 10 and consoles.

This means that the procedure for installing mods, at least using the in-game digital store, it is practically the same on all the platforms just mentioned. In this part of the guide I will therefore use the version of the game for mobile devices to give you a concrete example, but in reality the indications are also valid for what concerns Minecraft Bedrock per Windows 10 e console.

To proceed, just start the game and press the button Marketplace. By doing so, you will access the internal Mojang title store, which allows you to download several additional content, both free and paid.

It is essentially about against, as these contents are also made by third parties and not only by the game developers. There really is everything: give it on skin ai worlds, passing by texture and for the so-called mash-up packages, which combine various elements.

In any case, to look for gods free content, just press onicona della lens d'ingrandimento and activate the appropriate filter Related to monete. There are several interesting free mods for the Bedrock version of Minecraft.

Obviously I advise you to follow your preferences, but if you want specific indications I can only direct you to the mods called The legendary phoenix e Marine Biologist - Role play: Two free content that can significantly expand the gaming experience.

If you find something interesting instead paid, you can buy it by clicking on the appropriate box of mod and selecting il price button. Alternatively, you can go through the internal currency, consisting of monete. Generally 320 coins they cost 2,29 €, while 8.000 coins arrive to request a disbursement of 49,99 €.

In short, everything works like a common digital store and in the end the payment obviously depends on the platform (but generally making the transaction is not anything complicated). In any case, once you have downloaded the mod involved, you just need to simply apply it.

The procedure varies depending on the content chosen, but generally everything is very simple. For example, for the skin just press the button Equip skins, While the texture they must almost always be activated following the path Activate Texture Pack> MY PACKAGES> Activate. Finally, for the worlds just access the appropriate tab and press the button Create this world.

In any case, I advise you to avoid, for safety reasons, mods that can be installed from external sources. Of course, in some cases (as I also explained in my guide on how to ride a dolphin in Minecraft PE), it is also possible to proceed in this way. However, if you want some advice, it is good to leave it alone, as the game may not be worth the candle as regards the Bedrock variant of Minecraft, which the latter already has a large internal store.

There are, in fact, some unofficial apps dedicated to Minecraft, which are referred to as fleeceware, who were able to steal money from unsuspecting users. Some of them promised to install mods for the mobile version of the Mojang title.

In short, be careful and, if possible, go directly to the in-game store, in order to use only "controlled" content.

For the rest, if you want to deepen the matter, you can refer to my guide on how to put mods on Minecraft PE.

How to put mods on Minecraft Xbox 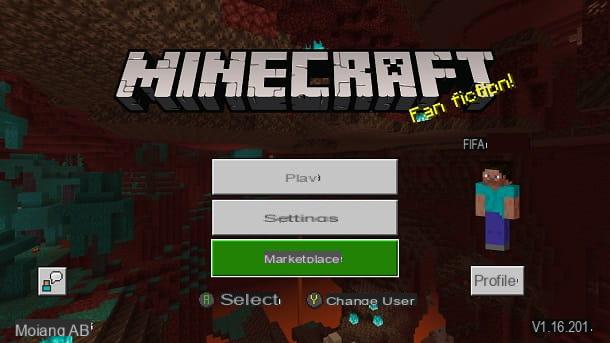 Well, you must know that in reality the procedure is essentially identical to the one I illustrated in the chapter dedicated to Minecraft PE and Windows 10. In fact, we are always talking about Bedrock version of the game and this means that you need to go through the Internal Marketplace.

You can therefore safely follow what I have illustrated above to be able to use the mods from this platform. However, obviously there are some differences to consider. In fact, in this case it is necessary to pay for the contents through the system provided by the console. 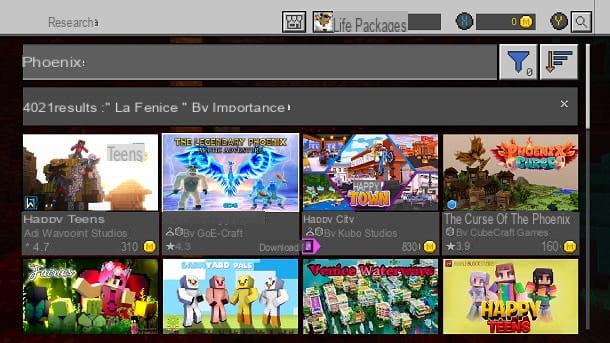 For example, if you are using PlayStation 4, I recommend that you follow my tutorial on how to pay on the PlayStation Store, in which I went into detail of all the supported payment methods. Obviously, everything is very similar also as regards Xbox, only in that case you go to the Microsoft Store.

In short, now you know a little bit of everything there is to know about the possibility of install mod on minecraft. Since you are a fan of the Mojang title, I would like to conclude this guide by recommending you to take a look at the page of my site dedicated to Minecraft. In fact, in the latter you can find many other tutorials that could be for you.

How to install mods on Minecraft

add a comment of How to install mods on Minecraft