Before going into the detail of the guide and therefore providing you with advice on how to improve in PvP on Minecraft, I think it might interest you to know more about this possibility.

Well, the term PvP indicates those ways in which i players compete against other users, rather than against AI-controlled enemies (that's PvE). This means that we are not referring to the classic Survival mode, but to online games made available by certain server.

To give you a concrete example, in the BedWars mode, one of the most played, usually you play against other users. Obviously Minecraft is a title that features a large number of content created directly by the community, therefore it is difficult for me to go into detail about all the possibilities offered by the servers.

Despite this, there are base meccaniche of the game which, if mastered well, can allow Minecraft users to improve your overall PvP performance.

In this tutorial I will therefore focus on some important aspects that you should take into consideration if you want to be able to excel within servers, trying to compete even with the most skilled users.

After explaining the situation to you in general, I would say that it is time to take action and see what are the main aspects to take into account for the best in Minecraft PvP.

Train on the right servers 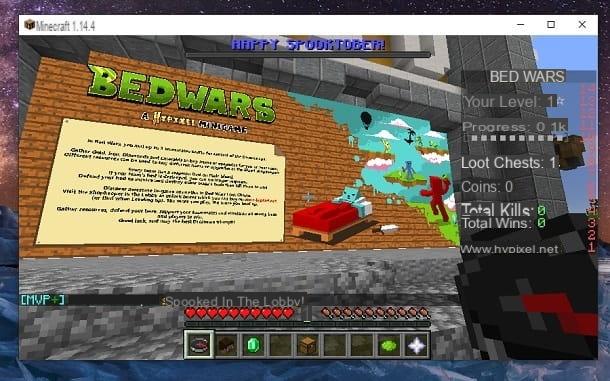 It may seem like the most mundane advice in the world, but in reality it is also the most effective. In fact, since PvP modes are widespread on various servers, the first thing you need to do is look for a room in which they are all a bit al your own level.

This means that joining popular servers may not exactly turn out to be a wise idea, as probably among the users present in these rooms there will be several already very skilled in PvP.

To give you a practical example, there are not a few who immediately enter, for example, the server of HyPixel to play a game BedWars, then finding themselves a bit "bewildered" by the skill of other users.

On the other hand, in these large rooms it is generally difficult to find someone who actually teaches you how to play such games while in "smaller" servers there are fewer people and therefore sometimes you can even ask questions directly to the managers, who may be more prepared than you in this regard.

In other words, the advice is to investigate even the less popular rooms, trying to log in and see if there is someone available to teach you the "tricks ”of PvP. However, training in these rooms may also allow you to find others users at your level and therefore to play games in a more fun way.

Obviously the variables involved are many, but I'm sure that, perhaps by following my tutorial on the list of available servers, you will be able with a little patience to find your ideal "virtual place".

Get the right weapons 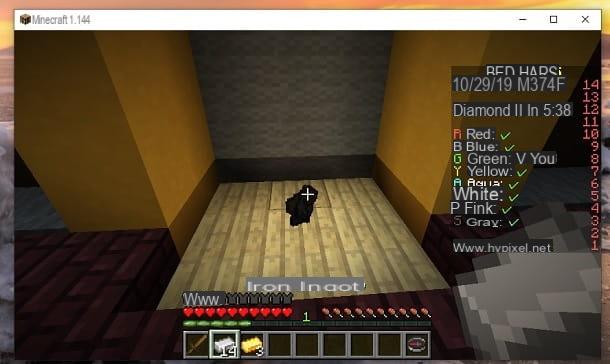 In some PvP modes, the game allows you to obtain, through the appropriate generators, of the units that then act as currency for buy weapons for use in battle.

The mistake that a good number of players make is to not delve into this mechanic properly, obtaining the first available weapon and immediately throwing themselves into battle. In reality, you shouldn't be in too much of a hurry to take on enemies, as without the right weapons you might have a hard time.

The advice is therefore to investigate thoroughly i times of generators, as well as how many units you need to get a particular weapon. After that, you can make the right calculations to be able to face opponents with thecorrect equipment.

Obviously, the variables involved are many here too and everything varies according to the server chosen; however I think you understand what I mean, since doing PvP without the right equipment is like wanting to continue in a title like Valheim without doing a bit of farming and creating the right items.

Use the food with the right timing

On some servers PvP is allowed use food for healing. This means that, with a bit of cunning, you can potentially be able to keep your life high without too much trouble.

In this case, it is difficult to provide you with precise indications, given the number of modes available. However, always carry an excellent one stock up on food it is never a bad idea, as it may allow you to regain life.

In fact, there are not a few users who, considering "boring" the use of food in these ways, as well as wanting to face the enemy immediately, immediately throw themselves into battle, making the mistake of not being able to recover life.

In these cases, that's enough hide for a moment and use the food: If you manage to do this, you will surely have a good competitive advantage in certain modes. I am thinking, for example, of those games in which you have to go from one island to another by means of blocks created by players.

Well, by letting your partner fight with the other user for a few seconds, it is possible to recover life and return to battle in a relatively short time to give him a hand and potentially shift the balance of the game. 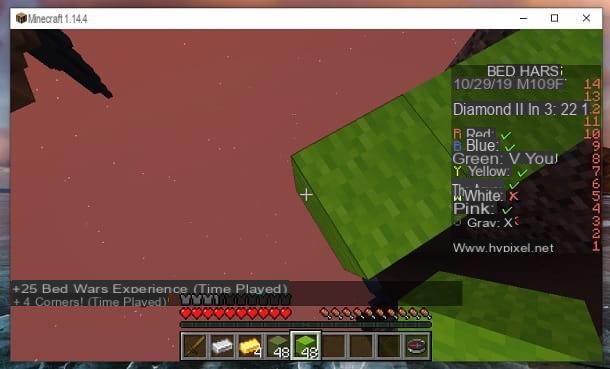 There are many players who, taken from the game, decide to throw themselves into the center of the action, attacking all the users they find repeatedly.

In this case, even if only skip a little here and there, as well as move in "zig zag" with the character, he can disorient the enemy, making his life more difficult. Also, if you're playing in a squad mode, this simple technique could allow a teammate to catch the enemy off guard, perhaps from behind.

As regards, for example, the ways in which it is necessary to reach other islands, a jump from one “suspended” block to another could give a hard time to less experienced users, who may perhaps miss the jump.

Also, build a way out of blocks in one direction and then suddenly change it it could allow you to "break" the predictions of your opponents, giving you a significant competitive advantage.

In short, doing what others do not expect is always a good way to try to shift the balance of a PvP game. This doesn't just apply to Minecraft, but it's general advice.

Learn the "tricks" of others 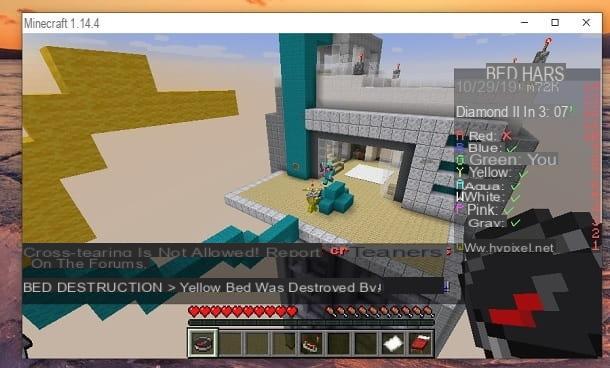 What is probably the most valid advice to be able to improve in PvP on Minecraft is "Take a cue" from other users. In fact, it is often possible to find particularly skilled players on the servers.

The latter probably won't reveal their techniques to you, but observing them closely could lead to some interesting discoveries. As I mentioned in a previous chapter, get into rooms with few players it might also help you dialogue with them and maybe learn something.

For the rest, obviously the world of the Web is teeming with interesting content made by streamer e Content Creator various who are used to playing Minecraft in PvP. To give you concrete indications, the advice is to start browsing the live streams available from the Twitch page dedicated to the Mojang title.

Here you will find content, both in cittàn and in other languages, in abundance. If you are looking for something specific related to PvP, in order to see how other people play, I also recommend that you use the search bar and type “minecraft pvp”. In fact, I remind you that, in case they are not there directed of your interest, you can always take a look at replicas.

Another great source of Mojang title-related material is YouTube's dedicated Minecraft page. Here, tra live streaming e video, you can surely find bread for your teeth, especially by using search keywords such as “minecraft pvp training” and the like. 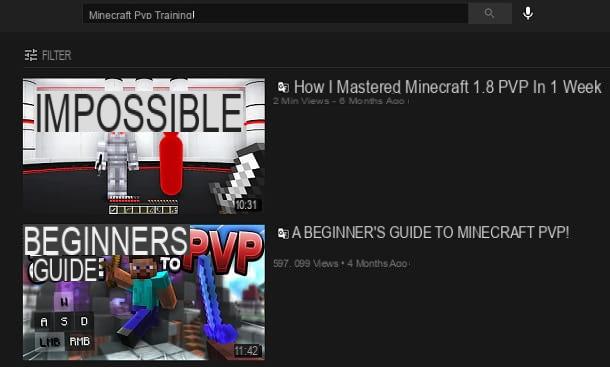 In short, in addition to training and putting into practice the main basic techniques, which everyone should know but which many often "forget", it is always good to deepen the methods used by the most skilled players, since there is so much good content online. It is enough simply to want to deepen the subject.

Obviously, you must also be patient, as improving in Minecraft PvP matches is not exactly something you do overnight, but rather playing several games within the right servers.

For the rest, since you are a fan of the Mojang title, I would like to advise you to deepen the page of my site dedicated to Minecraft, since in the latter you can find many other tutorials related to the game, which also go beyond the world of PvP.

add a comment of How to improve in PvP Minecraft