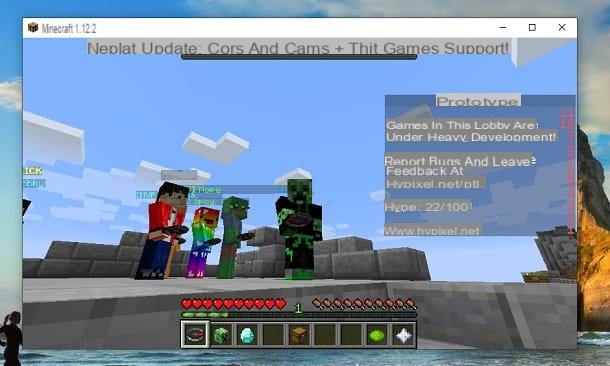 Before going into the details of the procedure on how to hide name on minecraft, I think it might interest you to know more about this possibility.

Well, you must know that, by default, Minecraft does not allow you to hide your nickname when playing online, if not through "tricks" which, however, often prove to be of little use to your purpose. I know: it is a lack that you might consider a bit "strange", given the enormous popularity achieved by the title of Mojang, but the situation is this.

It should also be noted that developers probably have their own valid reasons for not implementing a feature that allows you to hide your username online. You can only make "speculations" about it, but the motivation could be linked to cheater.

In fact, leaving the nickname clearly visible, users can potentially identify who is cheating and therefore to take the due measures To whom it may concern. In short, you understand that there are valid reasons not to allow the user to hide their name.

In any case, I also understand that in some contexts you may want a little more "privacy", since unfortunately it is known that in online communities, as well as in the real world, there are also people from whom it is better to stay wide. 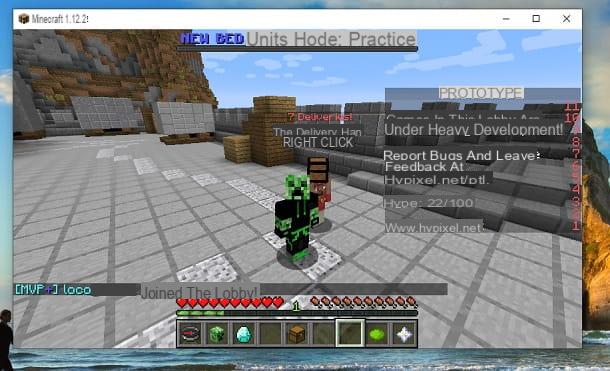 For this reason, over the years game enthusiasts have looked for ways to hide their nickname when playing online, finding the solution in some against, that is, in contents created directly by the community, which modify the original game and go beyond what is foreseen by the developers of the latter.


Here, however, we must analyze the question well. In fact, generally the use of mods in Minecraft is done offline, since in this way it does not cause any kind of "annoyance" to other users. That kind of use of mods is usually well received by the community.

However, in this case we refer to the use of third party content in online mode, and this not well seen by everyone. In fact, you may not be exactly welcomed by other users, as well as make the developers turn up their noses.

In fact, if you remove your nickname while playing online, some might think you are a cheater, or someone who wants to "cheat", or a player who wants to create havoc within the virtual room. On the other hand, if you think about it, removing the username could potentially perform various operations and not allow other users to report you.

To be clear, on some servers it is possible to let those in charge know that someone is not behaving appropriately by means of a specific command (/ report [username] [motivation]).

The latter is only an example and obviously does not work on all servers, but it is right to make you understand that, clearly, to report a player you need to know his nickname, otherwise it is essentially not possible to proceed.

In this context, you understand well that the situation is getting tangled. First of all, on console it is not possible in any way to hide your nickname, given that mods external to the game cannot be used and that obviously neither the internal Marketplace nor the default functions help in this regard.

Also, you need to know that the against to do this usually they only work with specific versions of Minecraft. In fact, since these are contents made by fans, even a small update is enough to make them no longer functional.

Finally, I remind you that you are using a third party content in some rooms online: this could easily get caught measures to server managers or potentially even to developers.

It is clearly difficult for me to let you know what the potential risks, given the myriad of variables involved, but I warn you that there are also conditions for the ban in some contexts (you may be seen as a cheater, as I explained earlier). 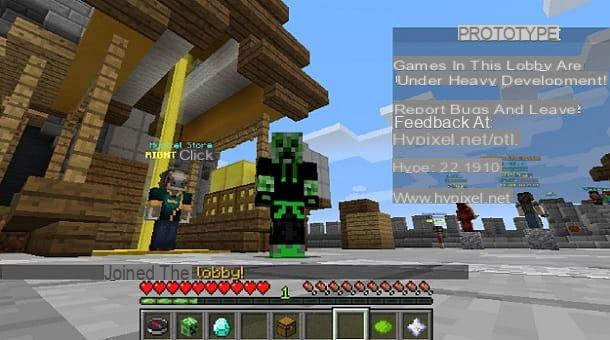 Put simply, there are several reasons why it's probably best to leave it alone. In any case, now you know how the situation should be. Having made these necessary premises and reminding you that I do not take any responsibility in case of problems with your account, if you are still interested, you can continue reading the guide.

In fact, I am going to show you the possibilities unearthed by the community over the years to hide the nickname within the servers and get a bit of "privacy" in Minecraft. 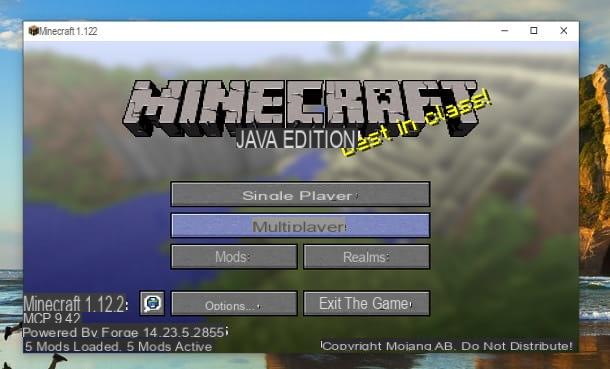 Having explained the overall situation to you, I would say that it is time to take action. In this chapter I will illustrate, for informational purposes only, how the Hide Names mod works, among the most popular for this type of use.

The Hide Names mod can be downloaded from the CurseForge portal and installed using the classic procedure (via Forge). If you have previously installed community-made content you probably already know how to do it, but I won't repeat the process here, as, as I said earlier, I do not recommend using this type of online content.

In any case, once the mod is installed, the latter does everything by itself. In fact, after entering any server, the user simply will not have the visible name. In simple terms, the nickname will not appear above the character's head. 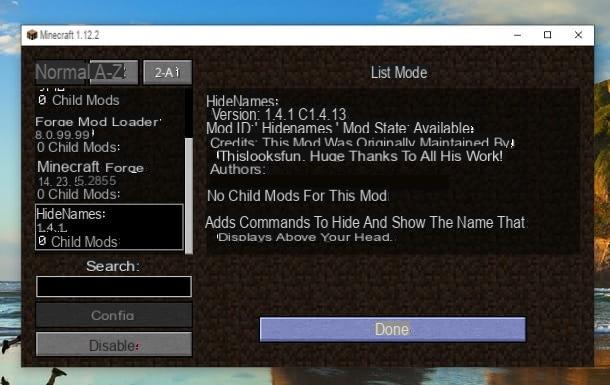 However, the user might be still able to display the names of other players, as the latter are most likely not using the Hide Names mod. On the other hand, as already explained above, the content created by the community is accessible only from certain versions of the game and there are relatively few who use this method.

In any case, the mod does exactly what it promises and therefore is actually possible hide your nickname in Minecraft, albeit with several limitations and bearing in mind the fact that there could be problems with your account.

For the rest, for the sake of completeness of information, you should know that over the years some users have managed to carry out this operation also by means of other methods. I refer, for example, to the creation of a special plugin for servers or to some commands related to the Command Block. Also, on some servers someone was able to hide the names of other users via the / scoreboard command. 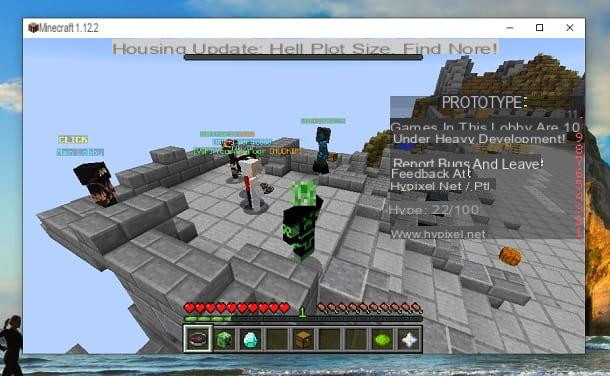 However, you should know that in this case these are methods that are useful up to a certain point and that, among other things, they only work in certain versions and types of Mojang title servers. Also, given the number of variables involved, you understand that it could just be a waste of time. That said, it seemed right to make you aware of the existence of these methods as well.

How to hide the name on Minecraft PE 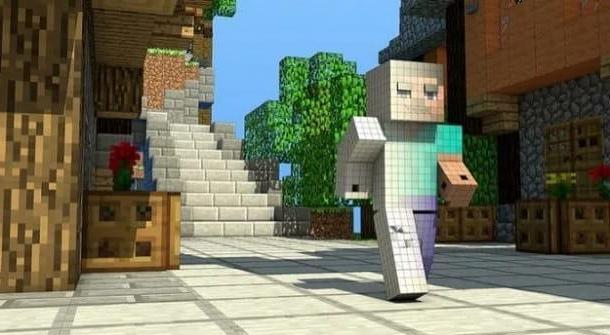 How do you say? You usually play the mobile version of Minecraft, what time ago it was called Minecraft PE? I'll explain the situation immediately!

Well, in this case you must know that unfortunately there is not much to do. In fact, as I illustrated in the preliminary chapter, to actually be able to hide your name on Minecraft it is necessary to go through some mods outside the game (or in any case for intricate procedures that could only represent a waste of time).

Of course, the mobile version of Minecraft also supports external mods. However, in this case I strongly advise you to let it go. In fact, in addition to the fact that it is an operation not exactly well seen by everyone, there is also the question of security of your device.

In fact, in the past some unofficial applications for mobile devices that promised to download third-party content for Minecraft but in reality only stole money from unsuspecting users (fleeceware).

In short, it is probably best to avoid hiding your nickname from this platform. However, I remind you that, in case someone is "bothering you", you can always do it reports, as I explained to you earlier, or take action.

In this context, you might be interested in learning more about my tutorial on how to ban on Minecraft. Also, I remind you that on this site you can find a page dedicated to the title of Mojang. I would like to advise you to consult it, since you are a fan of this video game and you could find bread for your teeth.

add a comment of How to hide the name on Minecraft