If you want enchant items in Minecraft without having to go through the entire procedure of creating books to then apply to weapons, armor and tools, your only solution is to use the command console.

The procedures that I will describe to you in the next chapters concern the version Java Edition of Minecraft for PC. Therefore, make sure you own this edition of this video game, otherwise you will not be able to put my suggestions into practice. 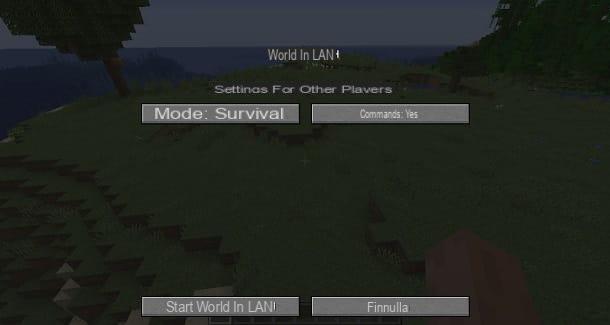 The first step to achieve your goal is to enable the command console. After activating it, you can use the game chat to execute commands, in the form of code strings, which will allow you to obtain already enchanted items.

That said, you can enable the command console either during an already started game session, or before creating a new world in Minecraft. But let's go in order.

If you have already created a world in Minecraft and you just want to enable the command console, what you need to do is press the key Esc, to access the pause menu. Once this is done, press the button Open in LAN and then click on the entry commands, in order to change it in value Yes.

Good! At this point, all you have to do is press the button Start the world on LAN, in order to enable the ability to use the command console in the current game session. I remind you that, every time you exit the game and re-enter the session, you will have to repeat the above procedure, as access to the command console is temporary.


Alternatively, you can enable the command console before the creation of the Minecraft world, so as to make it permanent, even when leaving and re-entering the game session. To do this, in the main Minecraft menu, press the button Single Player and click sul pulsating Create a new world.

At this point, press on the item Other world options and click on the entry commands, in order to change its value to Yes. Finally, confirm the operation, using the keys Done e Create a new world.

Now that you have activated the command console, you can access it by simply pressing the key T on the keyboard, which will allow you to open the game chat. The latter is generally used to send messages to players on the same server or game session, but now you can also type commands there.

Use the Enchant command 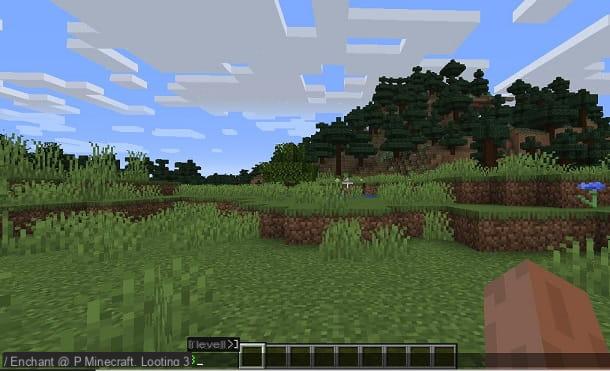 If you have an item that you want to give an enchanting bonus to via console, I recommend that you use the command Singing. The latter is very simple to use and only requires you to know the enchantment ID. But let's go in order.

The command to type is / enchant then followed by the target. The latter term means that it is necessary to identify the character to whom the enchantment will be transferred, specifically on the object he is currently holding.

Therefore, as a value you will have to indicate the term @p, which identifies your avatar. The resulting string will therefore be /enchant @p. Once this is done, you will need to indicate theSpell ID and its level (numerical value) to be given to the object, of which you will find a list below by way of example.

As regards the level, you can enter an (integer) number whose maximum value depends on the spell itself. If you do not enter any value for the level, a first degree bonus will automatically be applied. If you enter a too high level value, a system message will tell you what is the maximum value you can indicate.

Now that you know all the parameters to add to the command Singing, let's see together a practical example of enchanting an object. If you want to enchant a sword, all you have to do is equip it and select its quick slot, so you can see it in the avatar's hand.

Once this is done, type in the command console the string relating to the spell to add. In this case, if you want to increase the amount of items you get when you defeat an enemy, type the following string: / enchant @p minecraft: looting 3.

Use the Give command 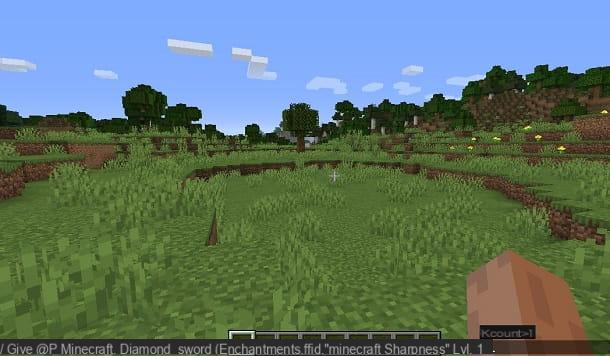 Among all the commands available in Minecraft, the one that interests you in order to be able to obtain already enchanted items is the Give. The latter allows you to inventory any object in the world of Minecraft: although complex to use, you do not need any specific knowledge, as you will find everything you need to know in the next lines.

To use commands in Minecraft, after opening the command console, you will first need to type the symbol / on the keyboard. This will be used to recall all the Minecraft commands. Once this is done, type in the term give then followed by the required attributes, separated from each other by one space.

The first attribute is the user to whom the objects you will summon are sent: you can type your name or simply use the value @p to identify your avatar. Therefore, the result of the string typed so far will be /give @p.

Now, enter the name of the object you want to obtain, referring, by way of example, to the list below.

Obviously, in case you want to get these same objects, but of a different material than diamond, all you have to do is replace the term “diamond” with the appropriate one.

Therefore, if you want to get a golden sword, what you will need to do is type in the string /give @p minecraft:golden_sword. At the moment the string is still incomplete, but let's see how to insert the appropriate enchantment.

To do this, I recommend that you type exactly the following string {Enchantments: [{ID, Level}]} next to the object code previously entered, without putting any space. In place of the term ID you will have to indicate the ID of the spell, indicating it with the value id: "spell_name". Refer to what I have already indicated in the previous chapter for the list of spells.

As for the level, you will have to type the attribute lvl: followed by number corresponding to the spell of your choice. Unlike the Enchant command, you can indicate any value, even if it is outside the maximum accepted value for that specific spell.

Finally, at the end of the string, you can enter the quantity of items with the characteristics you have just indicated that you want to add to your inventory. If you don't enter any value, you will only get one item.

Given the complexity of the command, it's best to see a practical example, putting together all the information I've given you so far. To add a diamond sword that is equipped with the level 3 Sharpness bonus, you will need to type the following string: / give @p minecraft: diamond_sword {Enchantments: [{id: "minecraft: sharpness", lvl: 3}]} 1. 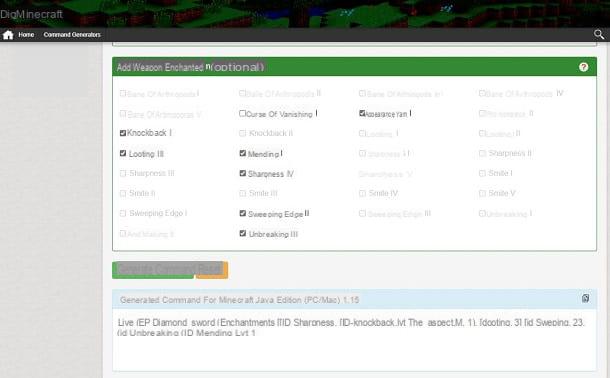 If you have any difficulty in composing the string to enchant an object or evoke an already enchanted one, the solution is to use online tools that allow you to set all the parameters necessary to generate it automatically. All you have to do is then copy and paste it into the command console.

Among the tools that can help you in this regard, I recommend those on the digminecraft.com website. Specifically, the Armor Generator, the Weapon Generator and the Tool Generator can be useful to you.

When you access one of the tools I have reported to you, you will be shown a form with different options to fill in, in order to generate the object with the characteristics you want. Putting into practice what I have already suggested to you in the previous chapters, only a few parameters are really useful. Let's see which ones to fill out.

First, the value Target must be set to Yourself, that is, on your avatar. Once this is done, move on to the third section, through which you can select the appropriate one from the drop-down menu object and its amount. Finally, put a check mark next to each single box relating to theenchantment to be infused into the object.

When you are done, hit the button below Generate Command, to get the command string that, as I told you, you will have to copy and then paste inside the appropriate text box of the Minecraft command console.