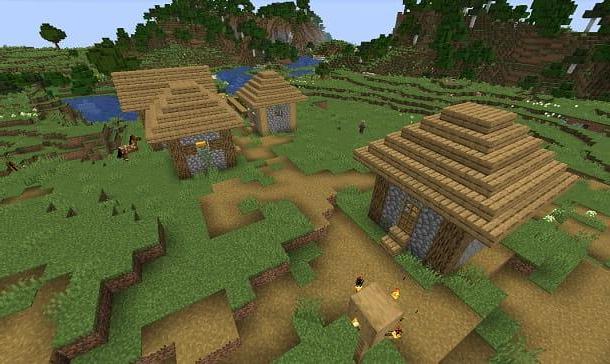 Before explaining in detail how to build a village in minecraft, I must inform you that the project you intend to put into practice will require several hours of play, in order to be able to realize every suggestion that you will find in the next chapters.

Therefore, you can also decide to modify an existing village among those that you can find during your adventures in the world of Minecraft. If you haven't met any of them until now, then you can read the advice I gave you in my guide on how to find a village in Minecraft. 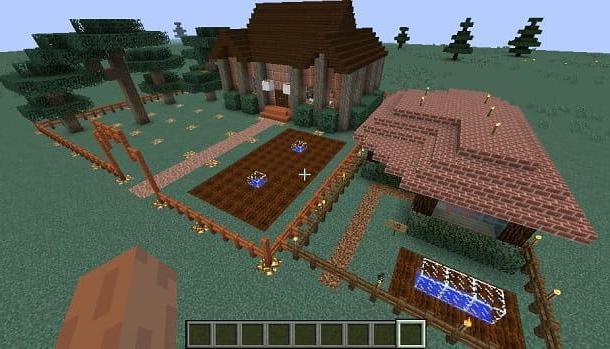 The first step to start building a village in Minecraft is to build some homes. First, however, you must precisely outline all the buildings you intend to build, even drawing up a simple draft of the project, in order to be sure that you will not have to demolish any buildings and, therefore, avoid wasting time.

That said, let's take action! First you have to build your house: you can give vent to your imagination and decide to build it with the materials you prefer. For example, you can follow the advice I gave you in this guide to make one modern style house, or build a real one chalet. The choice is up to you!

After you have built your house, you must also build those for all the other inhabitants, that is, the NPCs (non-juvenile characters) who will populate your village. In this regard, you can choose to build houses similar to the one you built for yourself or to build some simple houses, like the one I told you about in this tutorial of mine.


Finally, remember that it is important to furnish every home by adding all the necessary decorations. In this regard, you can consult my guide on how to furnish a house in Minecraft, in which I have given you some useful tips on the subject, which will allow you to create, for example, modern kitchens or bathrooms.

An object that you absolutely must not forget in every home is the bed. Its presence is essential in your home, so as to set a rebirth point for your avatar. NPCs, on the other hand, will use the bed in their homes to rest from time to time. Not sure how to build one? So I recommend reading this guide of mine.

Construct buildings for the works 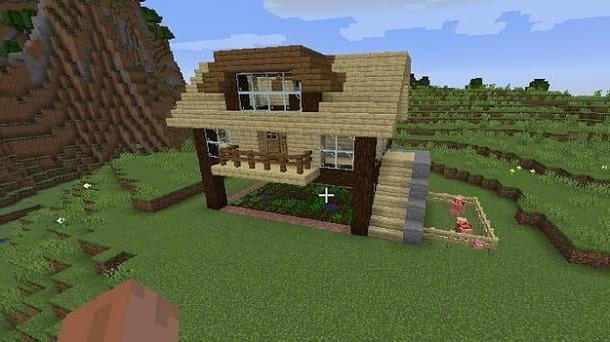 Once you've built the houses for you and the future villagers, it's time to build other buildings, which can be useful for the community or just for decoration. For example, you can build one school which, even if not used by you or the NPCs, can add a touch of style to your village.

A building that, on the other hand, can be of great use to you is the magazzino, which can contain chests to store all the resources you produce in the village or that you collect during your adventures in the world of Minecraft. If you want to know how to build one, you can consult my tutorial dedicated to the subject.

In addition to these buildings, you can also add one farm. This structure is useful both for raising animals and for farming: you can find all the useful information for the realization of this project in my guide on how to build a farm in Minecraft.

Finally, it is important that every future villager has a job that will be useful to you. You must know, in fact, that the NPCs of the villages do not have a profession, unless there is one work table with which they can interact.

In this regard, I recommend reading my guide on how to make a table in Minecraft, in which I explained to you, precisely, how to create workbenches for NPCs and how to make those that will surely be useful for you. work the resources you will collect. 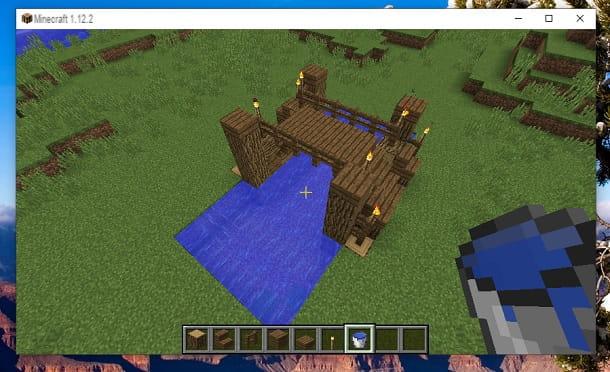 Once you've built all the essential buildings to make your village operational, it's time to decorate it with roads, bridges or any other useful element. For example, you can build roads to connect the various buildings using concrete blocks, a material I have told you about in detail in this guide of mine.

Also, if you built the village close to a stream, you can build a bridge to connect the two sides. This solution could also be useful if you want to make sure that there is only one way to enter and exit the village, useful for better defending it.

Along the side of the road you can build fences, in order to also separate each building from each other. These can be useful for many reasons: both on a decorative level and to prevent animals from wandering anywhere in the village; in addition, they are also an excellent defense barrier against most creatures in Minecraft, as they cannot be bypassed.

Finally, you can complete the decoration of your village by building several other projects, such as one Swimmingpool, a statue or a fountain. Remember, however, that the most important elements to add to your village, even immediately during its construction, are the cheers: light sources are an excellent deterrent to prevent hostile creatures from appearing around the village. 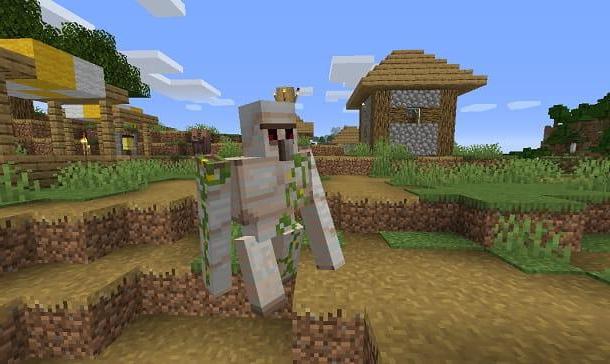 Another factor to consider for your village is his defense: the village, in fact, can be exposed to invasions by hostile creatures that can infest its streets and buildings, attacking the inhabitants who populate it.

In this regard, my advice is to build gods golem that they can defend the village whenever it is attacked by hostile creatures. If you don't know how to get one, I suggest you consult my guide dedicated to the subject.

As I suggested in the previous chapter, building a bridge as the only way to connect with the outside could be a great way to defend your village. In this regard, to improve the defense, you can consider making a ditch it's a drawbridge, so as to raise and lower it as many times as you want, without enemies being able to enter the village.

If you have opted for creating a moat around the village, then a Cannon could be for you! Thanks to the latter, you will be able to attack the enemies that you will find on the opposite shore. To make one, I recommend that you read my guide on how to make a cannon in Minecraft.

Finally, you can scatter around the perimeter of the village or in strategic points of passage of the traps, so that enemies can run into them and be easily defeated even when you are exploring the world of Minecraft. In this regard, I suggest reading this tutorial, where I explain how to build both explosive and classic traps. 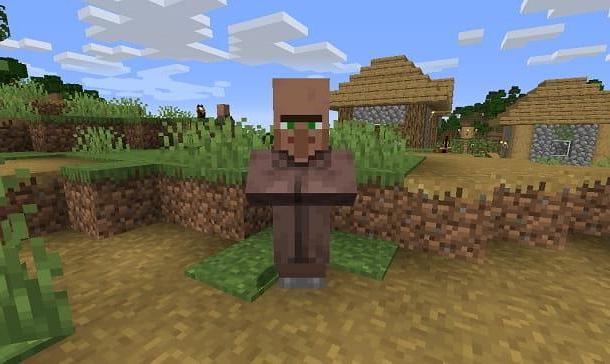 Finally, you can't build a village without villagers! All you have to do is summon gods PNG who will automatically take place in their homes and will be assigned a job.

In this regard, it is important that you activate the command console. Don't know how to do it? Then I invite you to read carefully what I have already indicated to you in this guide of mine, where I explained both how to enable the command console and how to install the mods, which could come in handy if you want to add some add-ons to make your village more functional.

After activating the command console, press the key T and type the command in the appropriate text box /summon minecraft:villager which allows you to summon gods A theme, that is, the NPCs who live in the villages you find in the world of Minecraft.

Mod to build a village on Minecraft 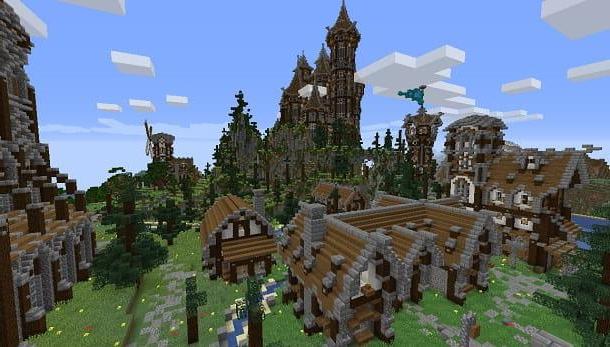 Don't want to waste time building a village in Minecraft as it would take too many hours? In that case, I can tell you that, thanks to the help of a special one against, which is an unofficial add-on for the Java version of the game on PC, you can make this task easier in just a few clicks. How to proceed? I'll explain it to you right away!

The add-on Instant Structures Mod (ISM) allows you to import any project in its database into your Minecraft world, through a procedure that requires just a few clicks. During the import phase, however, I advise you not to continue playing on Minecraft, at least until the entire procedure is completed, which can take up to several minutes for projects consisting of millions of blocks.

But before taking action, it is important to download and install the component Minecraft Forges, useful in order to allow Minecraft Java Edition to run the mods you want to use in your game world. To do this, go to the official website and press on Installer, to download the file .JAR of the mod. After downloading it, double-click on it and click OK, to complete the installation.

Now it's time to download ISM reaching its official website. On the home page, click the button Download Instant Structures Mod and choose the version of ISM compatible with that of your Minecraft client.

After downloading the file .JAR of ISM, move it to the folder mods, which you will find along the way C: Users [name] AppDataRoaming.minecraft. If you don't find this folder, you can create it manually, following the advice I gave you in this guide.

Well, we're almost there: all you have to do now is start Minecraft and press the icon ▲ next to the button Play. In the pane that appears, select the option Forge and click Play. Within a few moments, Minecraft and the ISM screen will launch.

Then log into a new world or existing Minecraft session, go to the ISM screen, and use your voice KATEGORIEN to access the database. Then type the term “village” and click Search.

When you have found the village you like best, click on its miniature and then press onbrick icon. Finally, tap on Place Structure and wait for ISM to import the project into the world of Minecraft. Convenient, right?

add a comment of How to build a village in Minecraft