How to build a temple in Minecraft 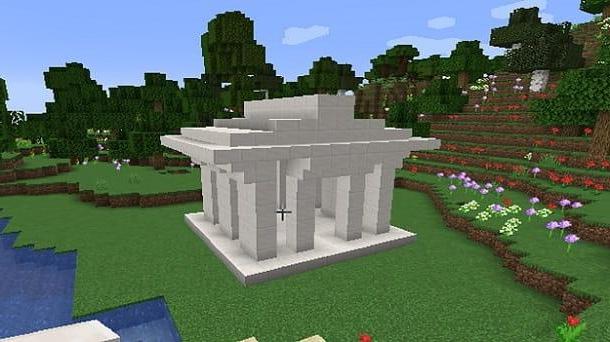 Before going into the details of the procedure on how to build a temple in minecraft, I think it might interest you to know more about this possibility.

Well, there are not a few who want to create a structure of this type within the title of Mojang, generally to contextualize it within their own village. In this guide I will explain both how to make a Greek temple that how to do a Japanese temple, so that you have a certain choice.

The advice is to implement the procedures possibly in the Creative mode of Minecraft, so as to already have all the elements within the inventory available. Also, you need to know that in this tutorial I will be using the Java version for PC of the game to give you practical examples, but in reality you shouldn't have problems making the structures in theBedrock edition instead available on Windows 10, smartphones, tablets and consoles.

In fact, net of some possible variation of the object names used, following the directions and maybe using a little imagination I'm sure you will be able to reach your goal in a very short time. 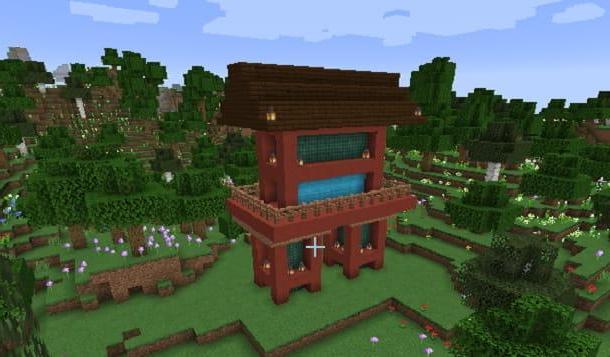 In any case, just to give you some indications right now, which among other things can be useful even if you intend to build the structures in Survival mode, I think it is interesting to quickly provide you with one list of elements which I will use in this tutorial.

As regards the Greek temple, the materials used are quartz plates e quartz steps. That's all: you just need to find these elements, of course in abundance, in order not to have problems during the relative procedure.

In short, now you have all the necessary information, useful for the continuation of the tutorial. For the rest, in the final phase there will also be a way to deal with one against able to simplify everything, so if you have the Java version for PC of the game, you might be interested in taking a look at that solution as well.

How to make a temple in Minecraft

After showing you the general situation, I would say that it is time to take action and build the structure involved within Minecraft. To give you more choice, I will explain both how to create a Greek and a Japanese temple. I know: they may seem complex, but in reality I will try to simplify the operation as much as possible, showing you creations that do not take too long to make.

How to build a Greek temple in Minecraft

Un Greek temple it is always a fascinating structure to insert within your own Minecraft world. I will therefore start from this type of structure. 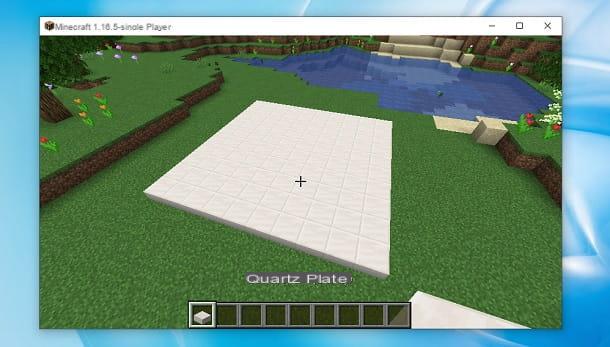 At this point, create, both in front and behind, 3 columns of quartz plates 5 and a half blocks high, spaced one block from the other (leaving a “free” block to the right and left). 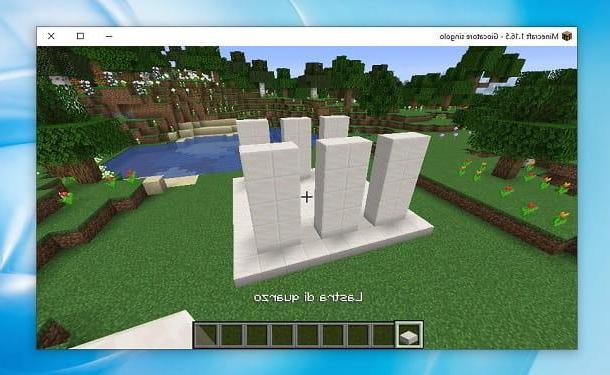 After that, square 2 quartz steps, facing upwards, in tall blocks of each column you created earlier. 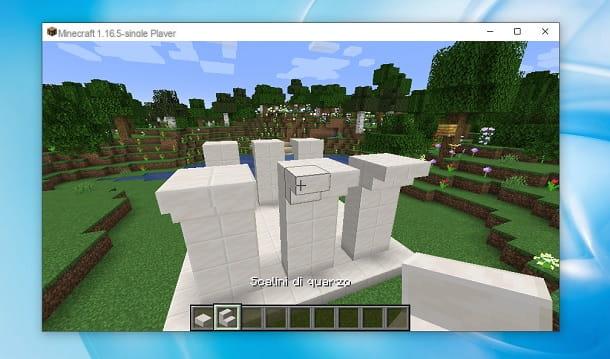 Next, realize an "upper floor" made of quartz slabs, starting from a block "in addition" to the various columns. 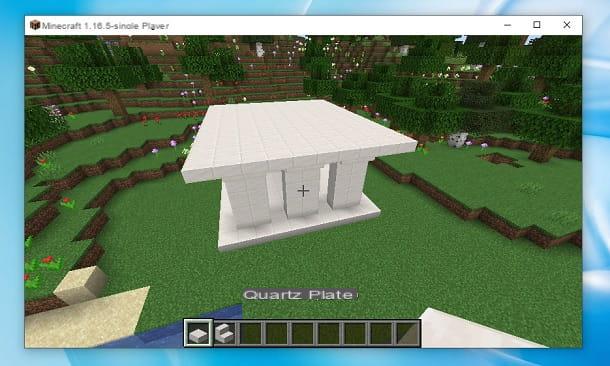 Move therefore on the side of the structure and creates, both on the right and on the left, 2 columns of quartz plates, leaving two “free” blocks in the center and one on the sides. Then "join" the two columns at the top by means of some quartz steps. 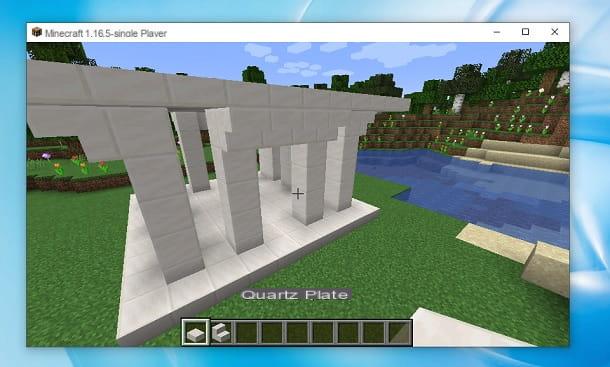 To conclude, you just have to create a roof, trying to create "steps" made of quartz plates which meet at the center. In this case personal tastes come into play, so I invite you to use your creativity to make the structure more pleasing to the eye. 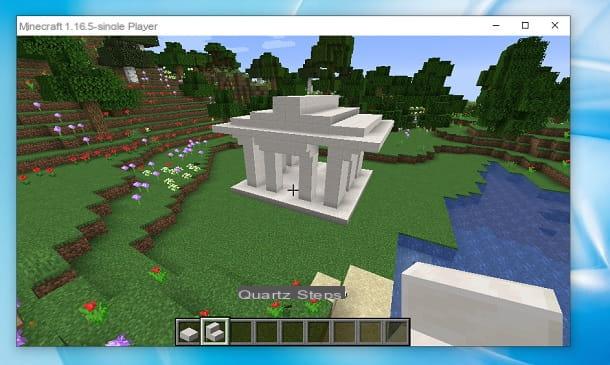 End. Of course, the one I have illustrated to you is only one basic structure, which simply serves to quickly understand how to "set up" a Greek temple in Minecraft.

Now you have to unleash your imagination and choose how to enrich it. On the other hand, the title of Mojang is also very popular due to the almost infinite possibilities in terms of customization.

How to make a Japanese temple in Minecraft

If your goal is make a japanese temple on minecraft, this is the part of the guide for you.

To start, place 4 red terracotta blocks on the ground, two in front and two behind, all spaced two blocks from each other. After that, connect them together, above, through others red clay blocks, leaving the central blocks empty. 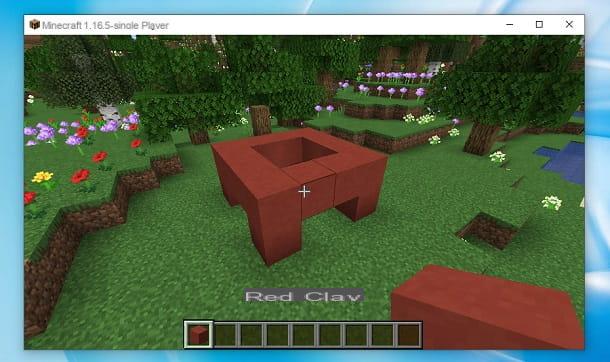 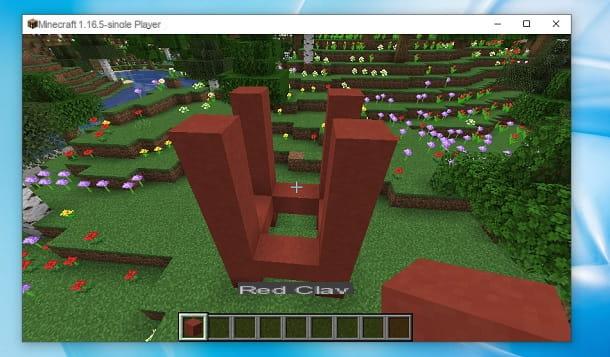 At this point, connect the columns to each other by means of gods red clay blocks and "fill" the entire interior of the structure by means of dark prismarine. 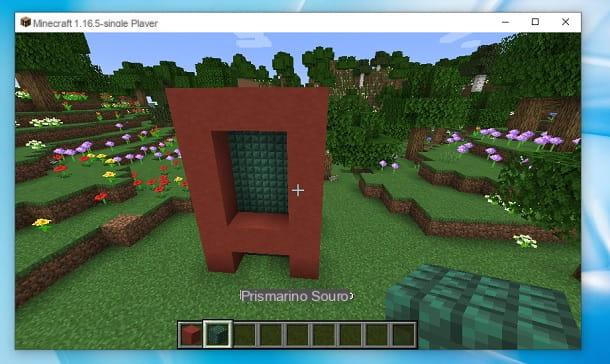 Next, move on right 4 blocks with respect to the structure e create another identical one, in the same way you did the first. 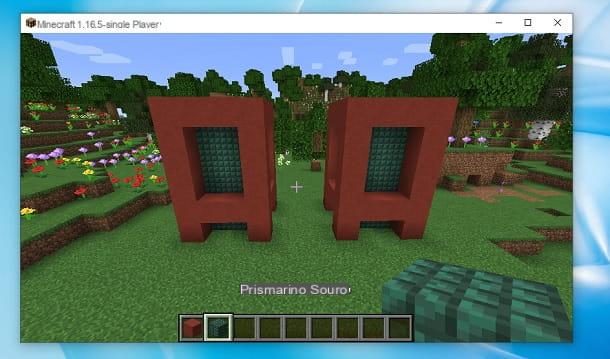 After that, connects the two structures creating a "Upper floor" of red terracotta, which goes "out" of a block with respect to the "buildings". 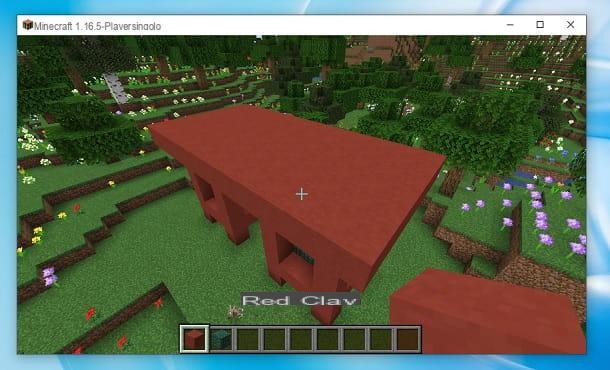 Take, therefore, some jungle steps and place them, facing upwards, just below the "upper floor", surrounding the structure. You could also think of "covering" them, at the top, with terracotta blocks, in case the steps "come out". 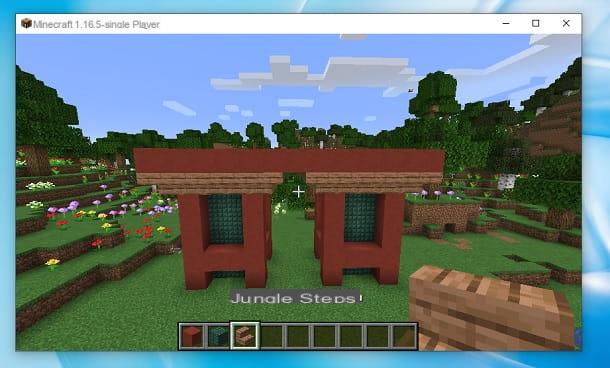 Now, place it high 4 red terracotta blocks, two in front and two in back, two blocks away from the edge of the structure. Starting from these, he then creates columns 3 blocks high e connect them between them. 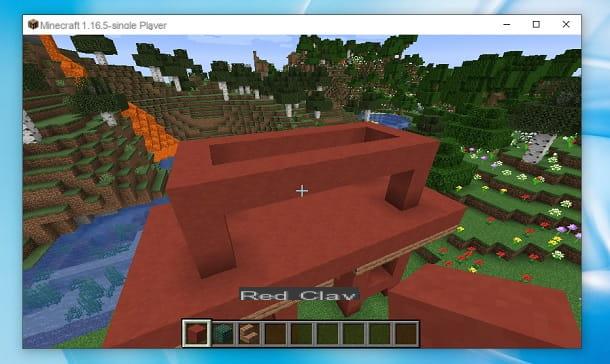 Next, create the same way a "second floor", at the top, extending the structure by another 3 blocks. 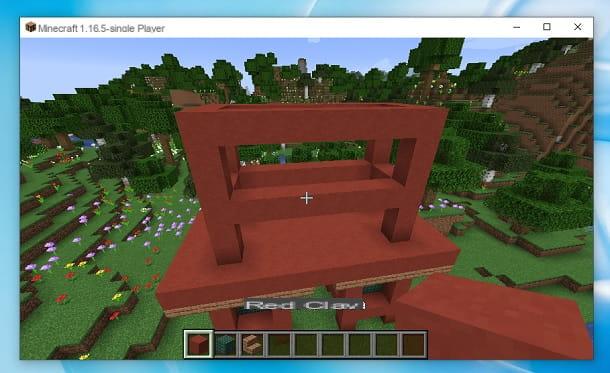 At this point, “Riempi” il primo piano at the top with blocks of blue wool. 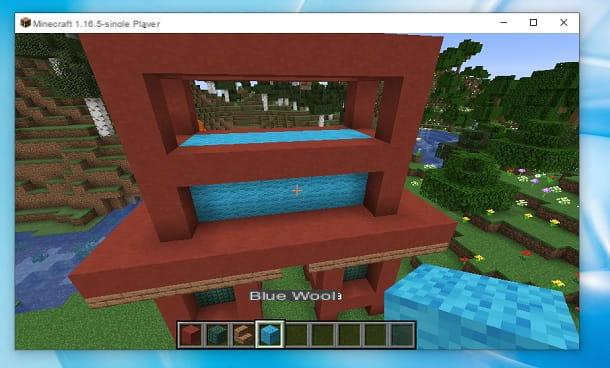 Time "Fill" the second floor by means of blocks of dark prismarine. 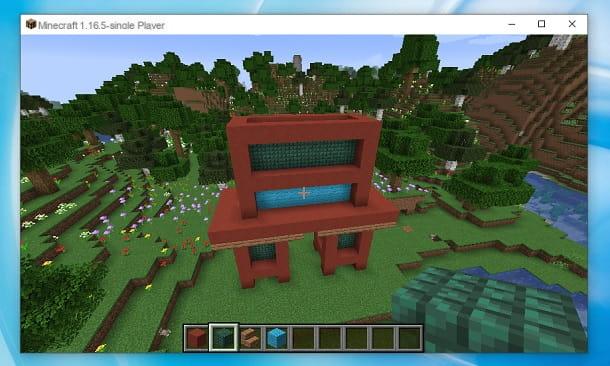 Once this is done, surrounds the structure, in the "intermediate floor", through the jungle fences. 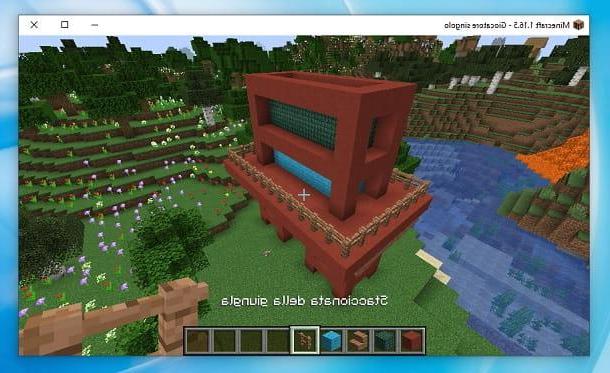 Next, it surrounds the structure, at the top, of dark oak slabs and create a second "line" of the latter that "comes out" of a block at the sides. 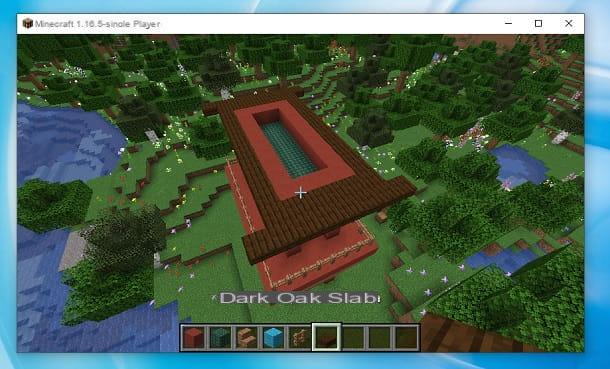 Finally, make a classic roof at the top, made of "steps" composed of dark oak planks. You can indulge yourself a bit at this stage, creating the construction that is most pleasing to the eye according to your tastes. 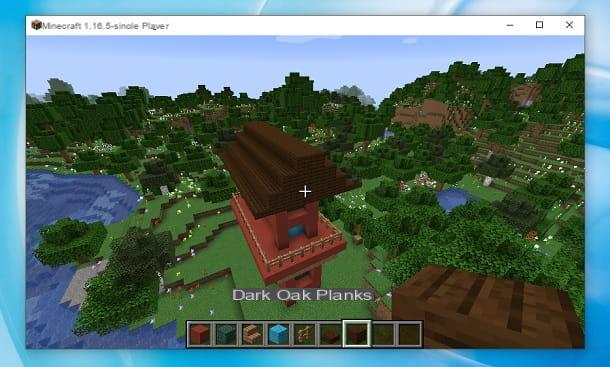 At this point, the Japanese temple is almost completed. In fact, it simply lacks that extra touch capable of providing the right atmosphere. For this reason, I recommend that you place lantern where you see fit. 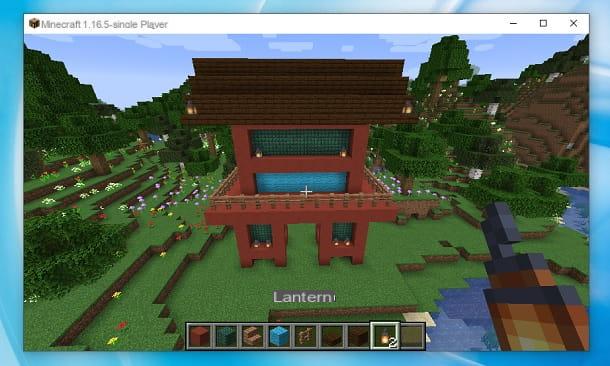 Perfect, now you have your own Japanese temple inside Minecraft. Clearly, it is one basic structure that you can expand as you want.

Mod to make a temple on Minecraft 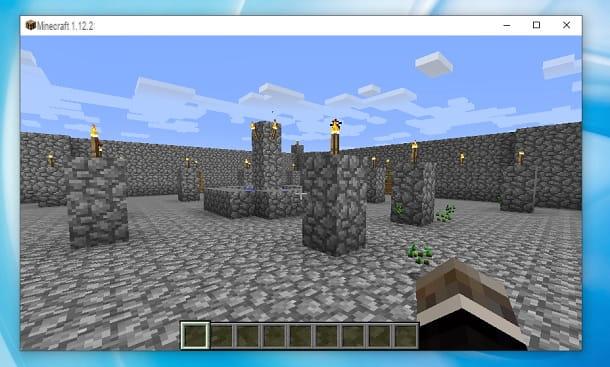 How do you say? You don't have a lot of time to build the structure and would like to have a temple inside Minecraft in no time? No problem, I'll explain immediately what you can do!

In this case, you need to know that there is one againstCalled Spawn Temple, relating to versions Java 1.12.2 o 1.10.2 of Minecraft, which allows you to do just that: quickly create a kind of temple. If you don't have the correct version of the game available, you can refer to my tutorial on how to change Minecraft version.

I also remind you that, to install a mod inside the Java edition for PC of the game, you need to have the appropriate one profile forge, related to right version of Minecraft compatible with the mod. If you don't know how to proceed, you can refer to my guide on how to install Forge.

If you have the latter available, you just have to connect to the CurseForge website, press the button Download, present in the box of version of the mod you want to install. After that you have to move / copy the file SpawnTemple- [version] .jar obtained within the folder linked to the contents created by the community.

Su Windows, the latter is usually found following the path C: Users [username] AppDataRoaming.minecraftmods, while on MacOS you have to go to the path ~ / Library / Application Support / minecraft / mods. As for Windows, you may need to turn on the display of hidden folders to succeed.

After that, once you start the game in Creative mode and selected the right profile forge from the Minecraft Launcher, you will find right away a temple already built.

Perfect, now you can use the latter as a base to indulge yourself, or "settle" for the structure generated automatically by the mod.

For the rest, since you are a fan of the Mojang title, I would advise you to take a look at the page of my site related to Minecraft, since in the latter you could find many other tutorials that could be for you.

How to build a temple in Minecraft

add a comment from How to build a temple in Minecraft