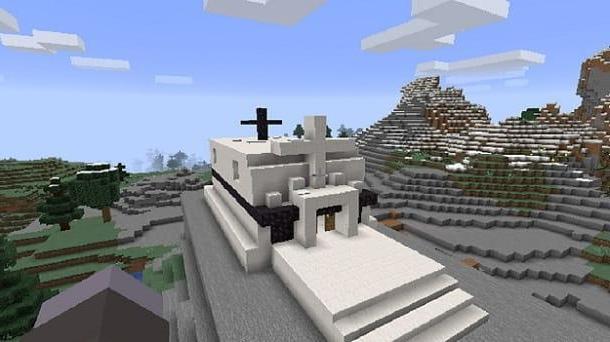 Prima di enter the dettaglio della procedura su how to build a church in minecraft, I think you might be interested in having more information about the requested materials.

I remind you that in the mode Survival of the game is necessary retrieve all items necessary to build the structure. In the mode Creativeinstead, you already have everything you need inside theInventory.

So, if you want to build the building in Survival mode, you need to know that you will need the following elements (at least if you want to emulate the project I made): quartz plates, quartz blocks, black stone slabs, orange glass panels e oak doors.

If you have doubts about how to find a certain material, you can refer to the cittàn Minecraft Wiki: inside it, you just need to type the name of the element of your interest in the search bar present at the top right, select the outcome more relevant and you will find out as well as it gets.

In any case, the structure that I will explain to you how to build in this tutorial is only aesthetic. This means that it is an empty building inside, but it can make an appearance and give a peculiar aspect to a village in Minecraft.

It is a structure that He "exaggerates" a little with the dimensions of the cross, thus aiming to be recognizable even from the distance. In short, it is a building designed to be inserted within a classic context offered by the title of Mojang.

Unfortunately, I anticipate that Minecraft does not have many basic elements regarding theinternal building, so you have to settle a bit. However, if you have the Java version for PC of the game, you can also follow the second part of the guide, in which you will find explained how one works against (only compatible with version 1.12.2 of the game) which allows you to give an extra touch to the structure also internally. 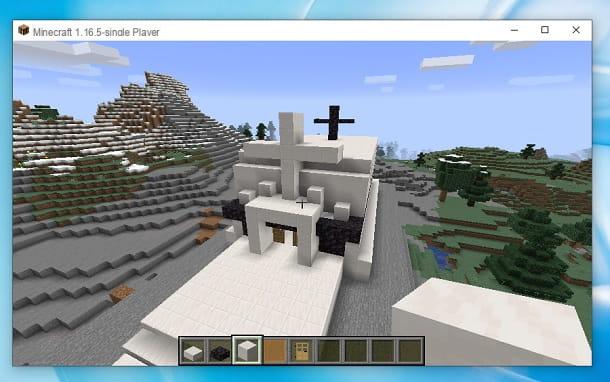 After explaining to you what the possibilities Minecraft offers to create a church, I would say that it is time to take action.

To get started, go to an environment that has many free blocks and take some quartz platespositioning 2 rows of 9 plates. 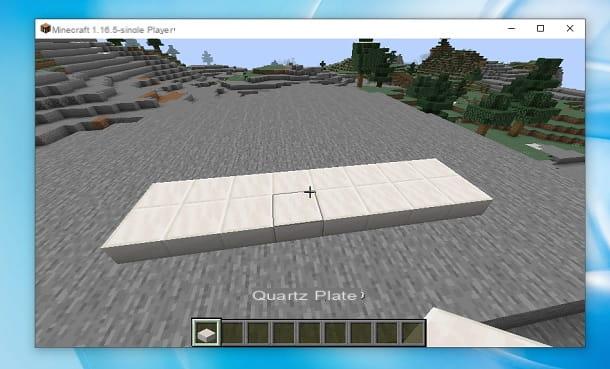 Next, place a second layer of plates in the blocks behind, in order to create steps. 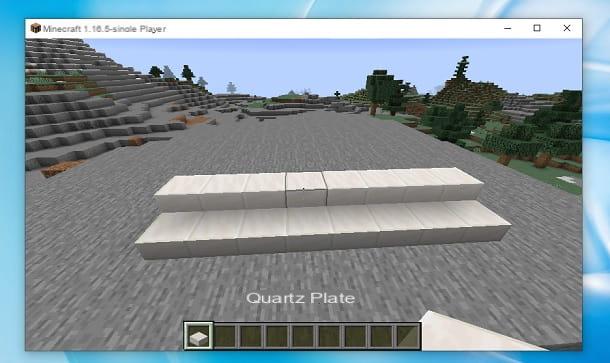 So continue in this way until you have 4 levels of steps. 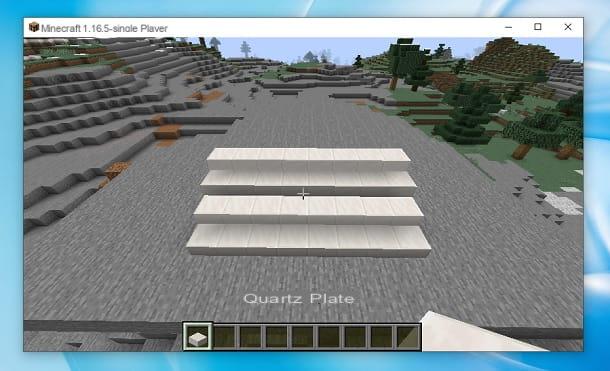 At this point, create a base 10 blocks long starting from the last level of steps. Always use quartz plates. 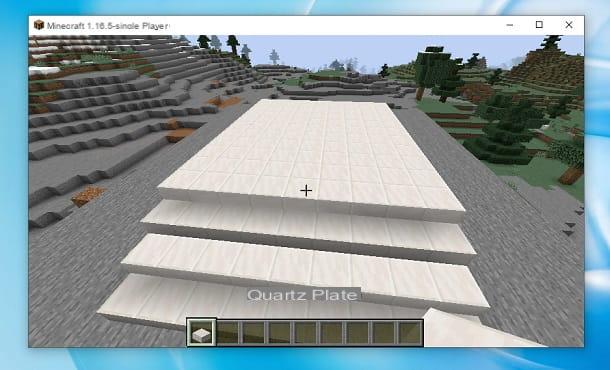 Once this is done, cover the lower part of the structure with other quartz blocks or slabs. 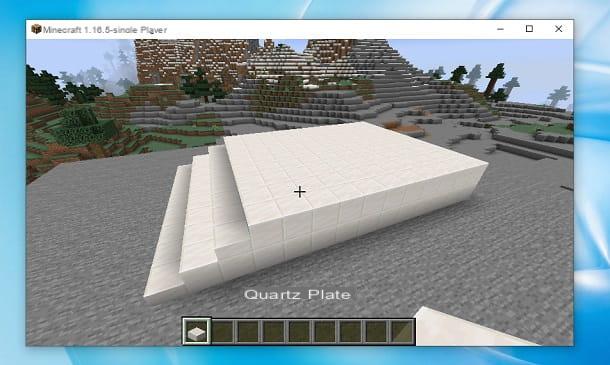 Now, position yourself on the fifth block of the last row, which is al center of the final row of the structure, and create a stack consisting of 20 quartz plates, completing 10 blocks. The thickness of the column is equal to 2 blocks. 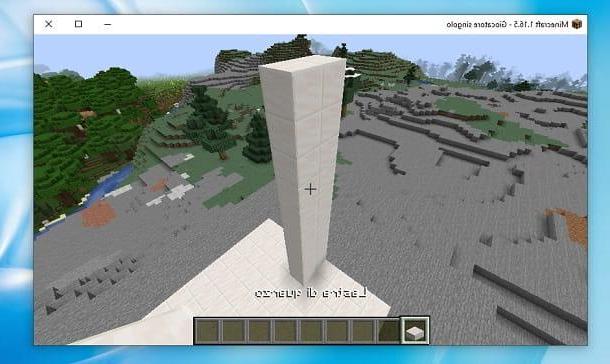 Subsequently, starting from third block from the top, create lines of 3 quartz blocks both right and left, making one cross. The thickness is equal to 2 blocks. 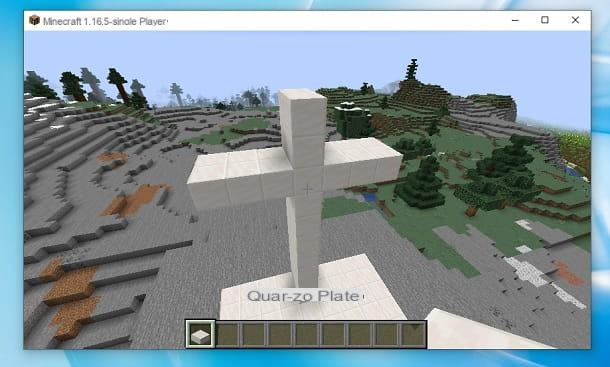 At this point, create 2 columns next to the cross: the closest one is high 5 blocks, while the second 4 blocks. Do this both left and right. 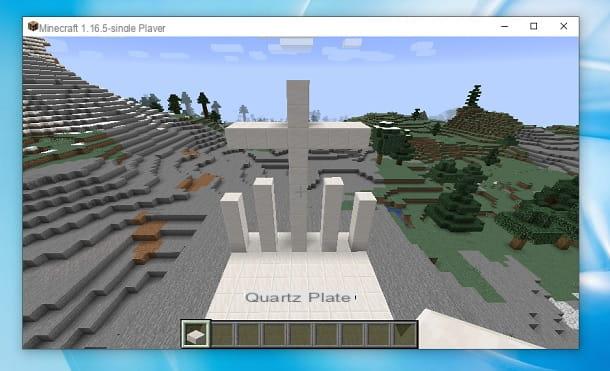 Take, therefore, some black stone slabs and create a row starting from third block from below. Also place a plate next to thelast block left and right. 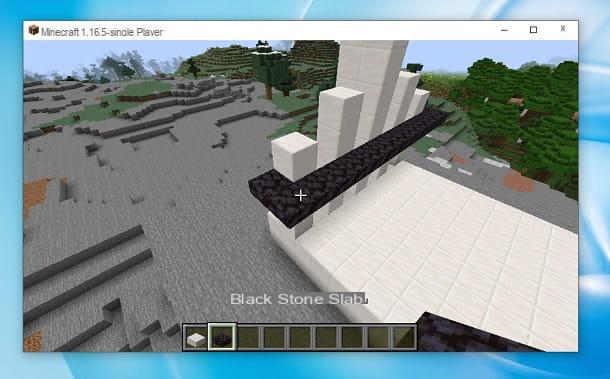 After that, break the white blocks below the row that you just created and replace those of column us black stone slabs. Instead, leave the part underneath the cross empty. 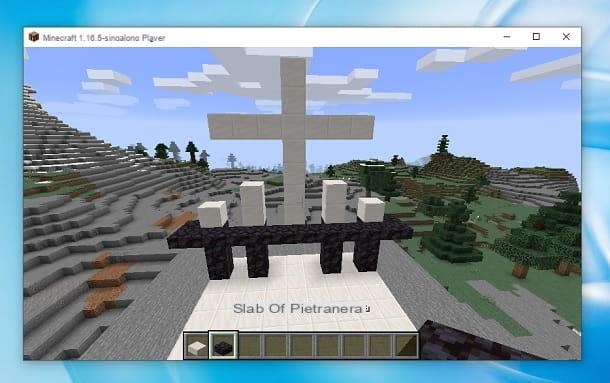 Therefore, create aentrance made of quartz plates starting from the first columns on the right and left. 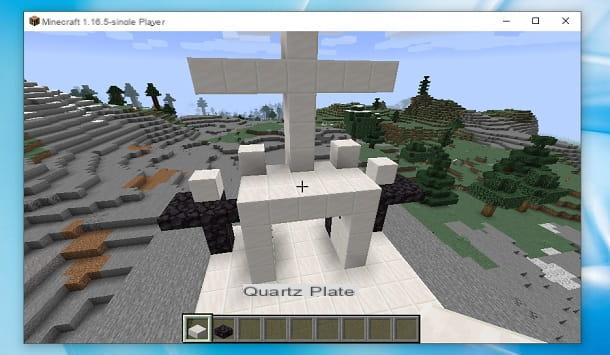 Now, extend the blackstone slabs towards the backpositioning 20 plates left and right, connecting them at the end. 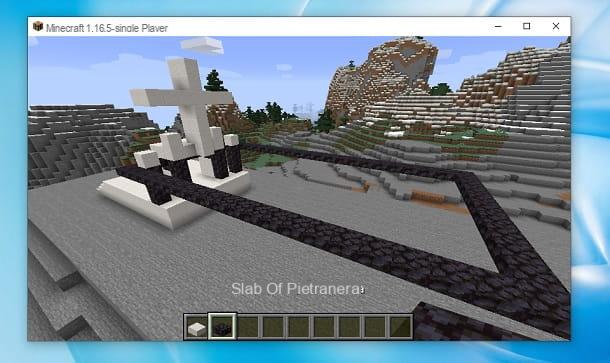 Subsequently, extend the floor to 2 blocks after the slabs of blackstone found in the air. Extend the base too 2 blocks left and right. 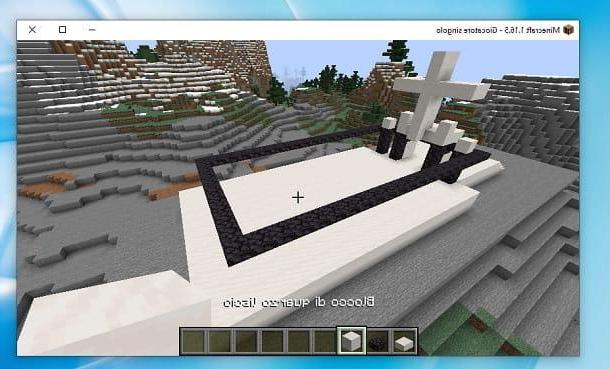 At this point, start from the back of the "arms" of the cross and close the whole structure us smooth quartz blocks. 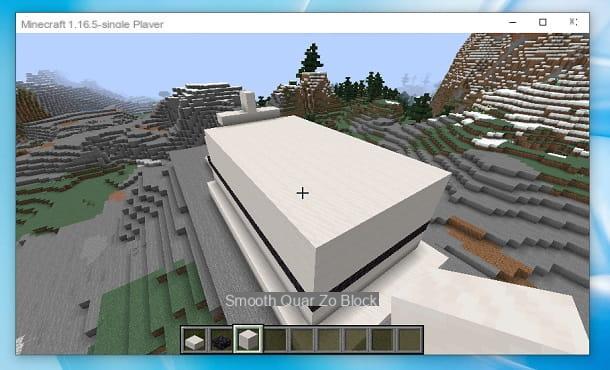 Perfect, the base building is now ready. To give an extra touch to the structure, you might think about making another cross on the roof with the black stone slabs. 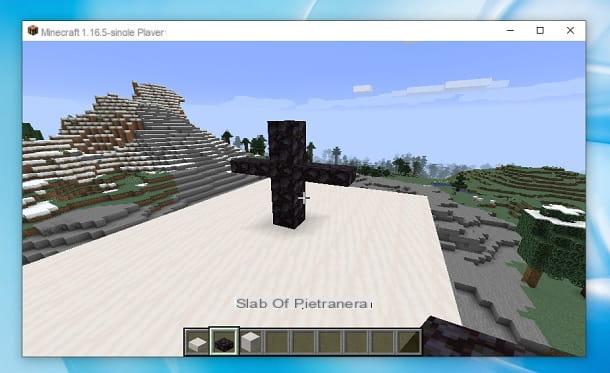 Another modification you could make is to build windows on the sides us orange glass panels, in order to let the light filter inside the building. 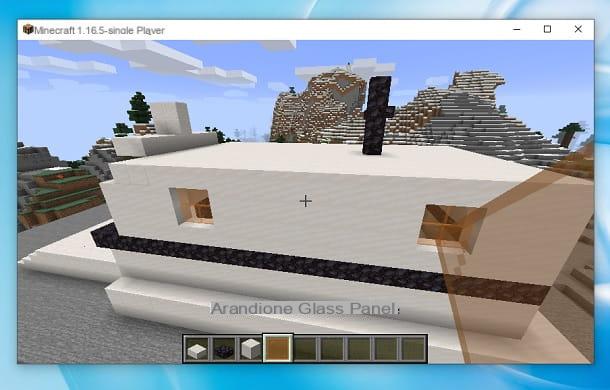 Also, you can place 3 oak doors at the entrance, perhaps maintaining the central one always open, in order to give a sense of welcome. 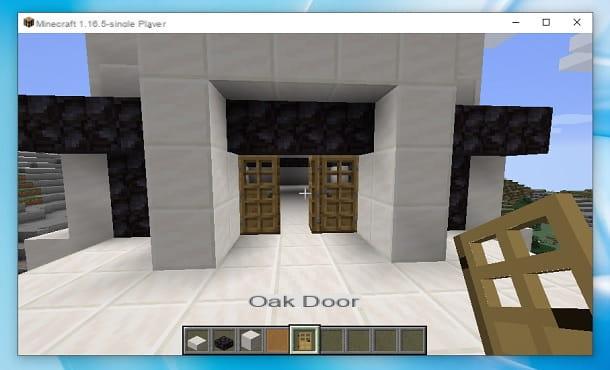 Congratulations - you have now successfully created your church in Minecraft. Obviously, what I have shown you is just a basic structure, designed to be built quickly.

In any case, you can always make all the changes you want to make the building more pleasing to the eye and maybe make it more similar to reality.

Mod to build a church on Minecraft

How do you say? You built the church on Minecraft following the directions I illustrated in the previous chapter but you would like to build it properly as well interior? No problem, I'll show you how to do it right away, using a mod - that is, a modification to the game's files - called Sanctus.

The latter is only compatible with the version 1.12.2 Java of the game, so it doesn't work with other editions of Minecraft. If you want to learn more, you can refer to my tutorial on how to change Minecraft version. In any case, you must have the profile forge to make the mod.

To install the latter, just connect to the Forge website and click on the box Installer. In this case you need a "dated" version of the Mojang title, 1.12.2, so make sure you choose it from the list present on the left. In some cases, you may have to wait a few seconds and click the button Skip, present at the top right, to start the download. 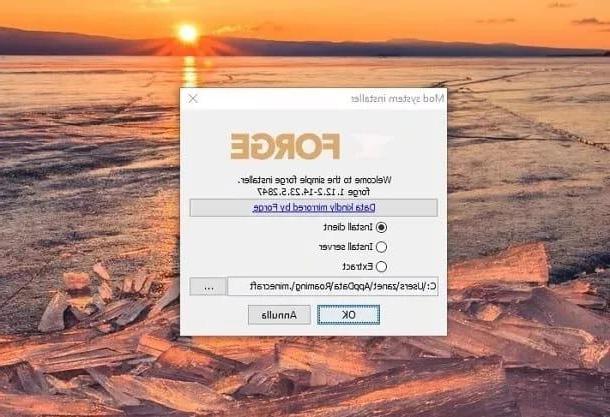 At this point, connect to the Curseforge portal and press the button Download present on the right. By doing so, you will get the St. + [version] .jar. In order for the Sanctus mod to work, you also need the one called Custom Stuff 4, which you can always download from the Curseforge website.

Successfully, avvia il Minecraft launcherselect il profile forge from the appropriate menu at the bottom left and press the button PLAYS. Once you have started a game in mode Creative, enter inside the church, premium pulsating E on the keyboard, click thearrow icon present at the top right and press onmod icon.

By doing so, you will see the elements added by Sanctus. Just drag them into thequick inventory of your character, present below, to be able to use them. 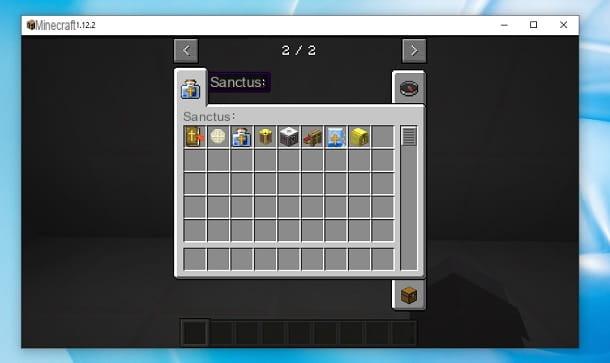 In this case it is up to you to choose how to use the elements added by the Sanctus mod, from the altar to the interior lights, to be able to recreate an environment that is as close as possible to the real one and contextualizes well within your Minecraft village.

Obviously it is only a structure within a game, among other things that is based on "cubes", so reconstructing the real design is quite difficult. However, as I have shown you in the course of this guide, it is still possible to create a building that is recognizable from afar and able to complement the structures of the village.

There is obviously no "spiritual" intent in the realization of this guide, since it is a simple virtual representation of a structure that is found in practically the whole territory and that always peeps out in all the villages. 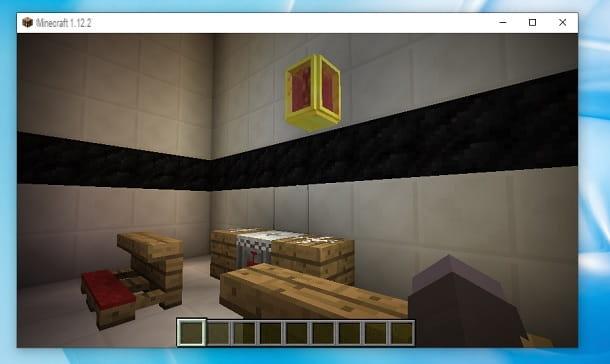 It is therefore normal that, when you want to create a virtual village within Minecraft, you also think about building a church, so as to make the "village" closer to the real one, to the context in which we live every day.

On the other hand, Minecraft is simply a game and is based on creativity: you will forgive me if I made a design a little different from the real one as far as the "virtual church" is concerned.

For the rest, since you are a fan of the Mojang title, I would advise you to take a look at the page of my site dedicated to Minecraft, where you can find many other tutorials that could be for you.

add a comment of How to build a church in Minecraft