How to ban on Minecraft

Managing your own Minecraft server is a great responsibility and it is therefore important to dedicate yourself with the right commitment to know the tools at your disposal, in order to make each person's stay peaceful within the generated world.

It happens very often, especially on public servers and without a password, that people connect with the sole purpose of causing damage and ruining the gaming experience to others: these people are defined griefers. They tend to attack (sometimes even in groups) servers with low or sometimes non-existent levels of protection, making life a real hell for those who populate them.

It therefore becomes vitally important to use preventive measures to be able to get rid of these people, and this is where command comes into play. / ban, which allows you to ban on Minecraft any person is bothering.

Obviously, there are less drastic alternative solutions, such as the possibility of throwing out a player temporarily with the command / kick [player name], or mute it with the string / ability [player name] mute true. But if you are sure you want to continue on your way, read on, I will cover each dynamic in a very specific way!

How to ban on Minecraft Java Edition

The procedure for ban on Minecraft Java Edition (only available on PC) is very simple. First you need to have the administrative powers of your server, the so-called OP.

To assign the OP to your profile, just start your minecraft server and, from the console, give the command op [your name]: after that you will be a admin and consequently you will have the possibility to use all the codes you want.

Now that you have the credentials to ban other players in your world, you can proceed with the actual command. We can distinguish bans into two types: one relating to player name (and consequently to his profile) and one that goes to act onIP of a player (blocking access to every connection with the same IP address).

In the first case, the ban will act on a player's unique profile: in this way he will not be able to log in to the server with the name of the account he has chosen to ban. The downside of this type of provision is that if the person you don't want to allow access to your world has multiple profiles, they can return without too much effort.

If, therefore, you are willing to ban a player's profile, open the chat (by pressing the T button keyboard) and type the string / ban [player name] [reason for ban]: by doing so, the player targeted by the command will be instantly thrown out of the world and, in the event that he tries to reconnect, he will see the phrase you entered as the reason for the ban displayed on his screen.

In this regard, I would like to point out that it is not necessary to enter a reason for the ban, the field can also be left blank.

There is no better or worse ban, however the ban on a player's IP will work differently from the one on the profile: it allows you to prevent a person from accessing with his unique address to which he connects to the Internet.

This means that, even if the latter has multiple profiles, considering access from the same network, it will still not be able to connect. However, there is one factor to take into consideration: the user, in fact, may have a dynamic IP address, that is, it changes with each access, which could make the ban ineffective.

If you wish to ban a player's IP, type the command / ban-ip [player name] [reason for ban] in the console, proceeding similarly to the previous example.

How to ban on Minecraft Bedrock Edition 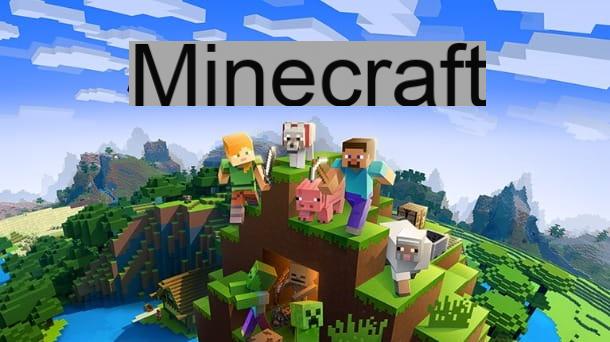 Unlike the Java version where the specific / ban command exists, in the Bedrock Edition of the Mojang title (the one for Windows 10, consoles and mobile devices) there is no real one: for this reason, you will have to go and create it yourself. Don't worry though, it's not difficult and, moreover, I'm here to explain how to do it.

In this version of Minecraft you can really let your imagination run free. In what sense? Simple: since there is no specific command to permanently eliminate other players from your world, you can choose the method you like best to keep them away from you or not to allow them to interact with the rest of the surrounding environment.

The simplest system is to go and build one prigione. The first thing to do is take care of the structure of the place where you are going to trap the victim: therefore, take a black color block your choice (wool or coal may be fine) and place them in such a way as to leave just the space for one person within its perimeter; then mark the coordinates of this point.

Now let's move on to the practical part: to imprison your "criminals", you will need the Command Block (Command lock), a powerful tool capable of executing script (lines of code) that alter the structure of the game. To enable these scripts you will need to first enable i cheat (i.e. the cheats) in the server.

To do so, click on the entry Settings and then on that Game, then scroll the menu that appeared on the screen to the end and, under the heading Cheats, check the box Activate the cheats. If any step is not clear to you, you can read my guide on how to activate the cheats on Minecraft. 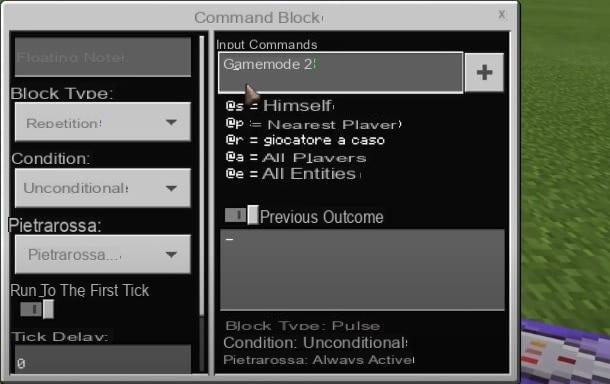 Once the cheats are enabled, you can activate the chat by clicking the T button whether you are on a computer or with the right directional key if you use a controller.

Then type the command / give [your name] command_block and place the block in a spot of your choice. Then click on it and, in the menu that will appear in front of you, go to modify the following items.

In this way, the selected player will not be able to change the game mode to "save" himself from the trap. Now go through the same process with another command block in a position of your choice, but this time edit the text field by typing / tp [player name] [cage coordinates], making sure to enter the exact numbers you wrote down before. Thanks to this system, the victim will be forced into your prison indefinitely.

If you want to make the experience of the one who decided to be deleted from the server even more frustrating, in order to force him to leave as soon as possible, create a new command block with the same characteristics as before, but this time write in the command input / title [player name] title You have been banned: you will make the writing you have entered in the script appear on the player's screen until he decides to leave the game.

Clearly, this is just one example. You can think of any other code to put into the command blocks and make it active - you can find a list of all the scripts available on the Minecraft Bedrock Edition Wiki.

How to ban on Minecraft

add a comment of How to ban on Minecraft